Meet the VFX Supervisors Behind Avengers: Infinity War and See How Their Passion for Film Keeps Those Disney Secrets

by Jazz Tangcay
in Interviews
3

VFX Supervisors Dan DeLeeuw, Russell Earl and Kelly Port are just a few of the hundreds of people responsible for the magic behind Avengers: Infinity War.

The persona of the film’s main protagonist Thanos was primarily created by the VFX team at Digital Domain who worked on the animation. WETA worked on the VFX for the main fight between Titan and Thanos. As the trio tell me, it was a passion for their work that kept the film’s secrecy locked and enabled the studio to keep the plot under tight wraps.

Read my chat with the VFX team as we learn some of those secrets behind Avengers: Infinity War. 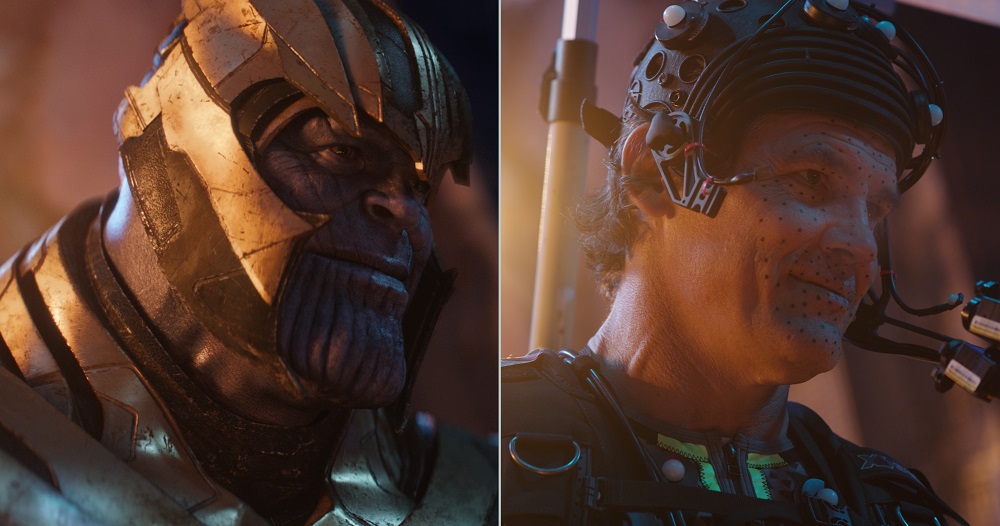 When you first saw the script for this, what went through your head?

Dan: For me, you’re pretty excited about it because you get to work on Infinity War. You see the amount of work and your excitement doesn’t dwindle, but the hairs on the back of your neck start to stand up a little bit as you figure out how to get the film done.

It’s a chance of a lifetime and you settle down and try to figure out who the best people for the job are. What was one of the biggest parts of the success of the movie was that we got really great visual effects team working on it.

Kelly: A lot of films that you work on, you don’t know whether it’s going to be good or not. Sometimes you don’t know. Sometimes a good script can not necessarily come over that well with audiences. We all knew going into this, it was going to be special and we had the really good opportunity to work on Thanos for this film and it put the pressure on us to knock it out of the park. I think our whole was super excited to be working on this and couldn’t wait to see it.

You mention Thanos, and we’ll get to him — but there are multiple studios working on this and it’s shrouded in secrecy. How does that collaboration process work?

Russell: We talked about this earlier, we have passwords. But everyone is so passionate about working on these films, especially a film like this. It’s great to find good films that also have good visual effects. People work on these films and put the time in and they love it. Everyone’s aware that if they share an image or plotline, that would be the end of their career. To that, because we’re so passionate about our work, we hold it close to our chests and spent that energy putting it into the screen.

How much do you know in advance?

Dan: I know pretty much knew everything that was going to happen from an effects standpoint depending on how you’re designing sequences or effects. There are some positions you need to know. From there, it’s a need-to-know basis.

When you’re working with VFX houses, it can be a “what you need to know” basis. If the people disappearing is within their sequence.

Kelly: Even the crew on set, depending on their roles, they don’t necessarily know and you can help navigate.

Thanos obliterated everyone to dust. What challenges did that pose?

Dan: It’s something we had. The arc was always there going in and we knew we had the design going in. We knew he was going to be this subdued protagonist, but getting the right team to work on that was a hand-off to Kelly. But, we reached out to WETA and Digital Domain.

We started off with a test and digital capture. Josh was trying to get a sense of the character and that was important to us with what we could do with that performance.

Kelly: Ryan Meinerding who was at Marvel’s visual development department initially created a lot of concept art and 3D sculptures that he shared. We took the characteristics of Thanos and integrated that into the design a little bit especially around the eyes and that helped translate Josh’s performance without going too far away from the original design.

For us, developing the character of Thanos was really about trying to get as much of the details of Josh’s performance in his face and get that into the character as much as technically possible.

What were some of the challenges of Thanos and working with WETA with the VFX?

Dan: It’s about casting the right company. Early on, we decided we wanted to start with Thanos and two vendors and make the best of both companies and their ability to create and innovate. The sequences were handed out, WETA was working on Titan, and one of the first scenes we shot was when Peter Parker flips out. We were able to use that footage as our test for turning people to dust.

WETA started working on the test for that. We knew we wanted to make the Infinity stones unique and each has their own personality. As he combines the stones throughout the movie, two is better than one, and so by the time he gets to six, we wanted to do something over the top. We kept magnifying the power and it turned out to be this big mash of light and dust. It didn’t fit the moment.

As we were learning and discovering and the mood of the edit, it became a very sad moment where the effects had to fit into that. We had this light pass showing the souls leaving their bodies. We went off the ashes to ashes, dust to dust. The animation of that dust would match the performances were. Peter Parker is fighting for life and not ready to go and holds on for as long as he can, so we showed that.

There’s the big battle in Wakanda at the end. The showdown.

Russell: This set was built on this horse farm in Atlanta that also had 300 feet of a river that effects had built a river that they could turn on and off. We planted grass months in advance. Something akin to what you would find on an African savanna. At the time, Black Panther hadn’t come out but we could see what had been done for that so we ended up building upon that. We ended up building the savanna plains from the ground up. We looked at the trees and had a simulation engine where we could have thousands of outriders and we had our shield effects. We worked off of the pre-vis and post-vis that came from Dan and the team and we worked to bring Wakanda to life.

I have to say, it was one of the rare times when social media did not ruin that ending.

Dan: It was a rare thing. The stars tweeted about it asking not to spoil it and it’s like Christmas presents. You get the perfect present and you’re busting, trying not to spoil it. That was with the fans here too. I think Kelly said he went to see it with fans on a Saturday just to get that reaction.

Kelly: It’s really special because we carry the secrets for a year or more. When we see it with the fans, what’s special is to hear the reactions. That really is the first time that I’m sitting there listening to the reaction of the efforts your team has put in.

A First Look at Hulu's Adaptation of "Catch-22"