Until I began compiling my best of list I didn’t realize just how vivid of a year 2018 has been for television. So much so in fact that I’ve struggled to narrow my list down from over twenty worthy titles to ten or twelve. And with the last minute release of Black Mirror: Bandersnatch I’m already second guessing my ranking.

So this year my list looks different than it might in the past. It includes a surprising late night talk show that’s just beginning to find its own, two Ryan Murphy projects that will go down as some of the storyteller’s most accomplished work, and two comedies deep into their runs that have proven why they are the best TV has to offer.

My list of honorable mentions is probably long enough and deserving of its own post. In the spring I was convinced that Barry would easily crack my top five but as the year progressed it was unfortunately pushed out, although it doesn’t change the fact that the second season is one of my most highly anticipated of the upcoming year.  Last year GLOW and Insecure easily made my list, and they were on the cusp of returning again.

2018 was a great year for limited series that are going to make the lists of plenty of other critics including Sharp Objects, Escape at Dannemora, and The Little Drummer Girl. I’m embarrassed to say that I never got around to the new season of Better Call Saul but I know once I do it will sneak into my top ten. I also appreciated new shows like The Haunting of Hill House, Bodyguard, and Homecoming.

I’ve found countless guilty pleasures in teen dramas like Riverdale, The Chilling Adventures of Sabrina, and even To All The Boys I’ve Loved Before (because let’s be honest it was clearly a Made For TV film). Netflix has really stepped its game up with its nonfiction programming including Hannah Gadsby’s Nanette, the new Queer Eye, and Nailed It. I fell in love with Alone Together on Freeform and the platonic partnership between its two leads which made it’s cancellation one of the biggest disappointments of the year.

With that all said here is my top television of the year. 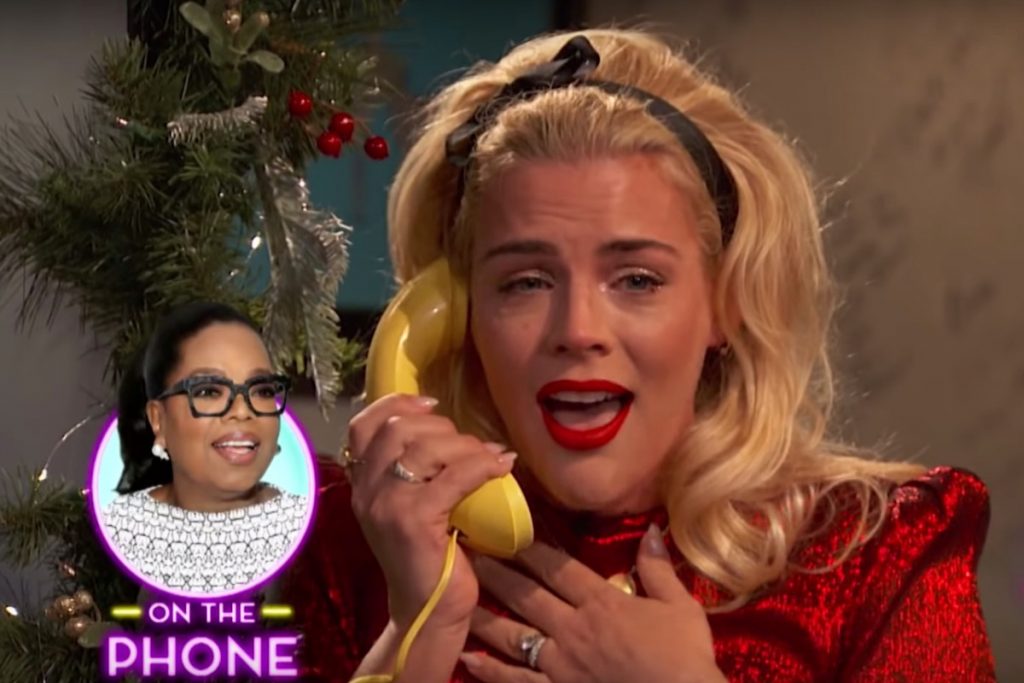 Busy Phillips has by far the most endlessly enjoyable instagram and now she has finally channeled her honest yet oddly comforting presence into her very  own late night talk show, Busy Tonight. The new talk show is still working out its kinks but it has quickly become my nightly routine. Busy is the perfect fit to loosen up celebrity guests like Jesse Tyler Ferguson and D’Arcy Carden. As the show has progressed Busy has found the perfect blend of tongue-in-cheek humor and heartwarming sincerity from her nightly commercial change into Mr. Nightgown to her nightly sendoff song ending  with an “I Love You” directly into the camera. She’s already achieved her first goal of having Oprah call into the “Oprah Phone” and we all know it’s only a matter of time until her beloved best friend, Michelle Williams, is a guest – which will certainly be the television event of 2019.

The Emmy-winning first season was a piece of television that I admired more than I loved which is why it was a complete surprise by just immediately won over I was by the recent second season. The performances, direction, and production design were lavish in the best ways possible without ever straying from what made the show such a sensation in the first place. What made the second season click in ways it struggled for me in the past was the attention paid to Marin Hinkle’s Rose. Her brief subplot where she gets her groove back in Paris is by far the best element of the show, and I will be the first and by far the most enthusiastic Hinkle supporter all the way to the Emmys.

Four seasons in Daniel Levy has become one of the strongest television creators currently working. Since its premiere in 2015 Schitt’s Creek has consistently been one of the funniest comedies on television, but this year Levy took the characters to a surprising new level. Both Levy’s David and Annie Murphy’s Alexis matured in ways I never expected from the show, and each found their own romance in some of the most honest portrayals of 21st century romance I have seen on television. David’s relationship with Patrick has become increasingly important to me being able to see a gay relationship play out that never once has to entertain the thought of homophobia as an obstacle and gave audiences the added bliss of not one but two performances of “Simply The Best.”

I have always been an unapologetic devotee to the world of Ryan Murphy. The groundbreaking storyteller has made a career out of bringing the marginalized to the forefront of mainstream culture for over a decade now. So, it’s all the more surprising that the second installment of American Crime Story feels like something we’ve never seen before. Murphy and his team were able to take a story of someone we had no business sympathizing with and forcing us to come to terms with how our own culture is to blame. There was zero chance that Murphy and his team were going to be able to recreate the success of the first season, and I’m grateful they didn’t even try to. Instead they told the story through a surprising reverse structure by beginning with Verace’s murder and slowly working backwards without ever leaning into the investigative or judicial elements. On top of its compelling themes and standout performances from Darren Criss, Cody Fern, and Judith Light. At times audiences didn’t know how to respond to the season but as time goes on I’m confident this will go down as one of Murphy’s best projects.

I don’t know how to even begin writing about Maniac in a way that does the show justice. All I know is that I had I experienced an overwhelming reaction to what the show has to say about how we deal with grief, PTSD, and the memories we’re left with. Some episodes and dreamscapes are more captivating than others, in fact the Jonah Hill material never quite worked for me. But Emma Stone continues to prove why she is one of the best working actresses in entertainment right now and the rest of the ensemble completely delivers. The penultimate episode in particular featured a scene in an elevator between Stone and Field in a gut-wrenching conversation on loss that I am still struggling to shake. It’s too bad that audiences struggled with the limited series and I urge everyone to go back and give it another chance because Cary Fukunaga is one of the most exciting filmmakers working today. 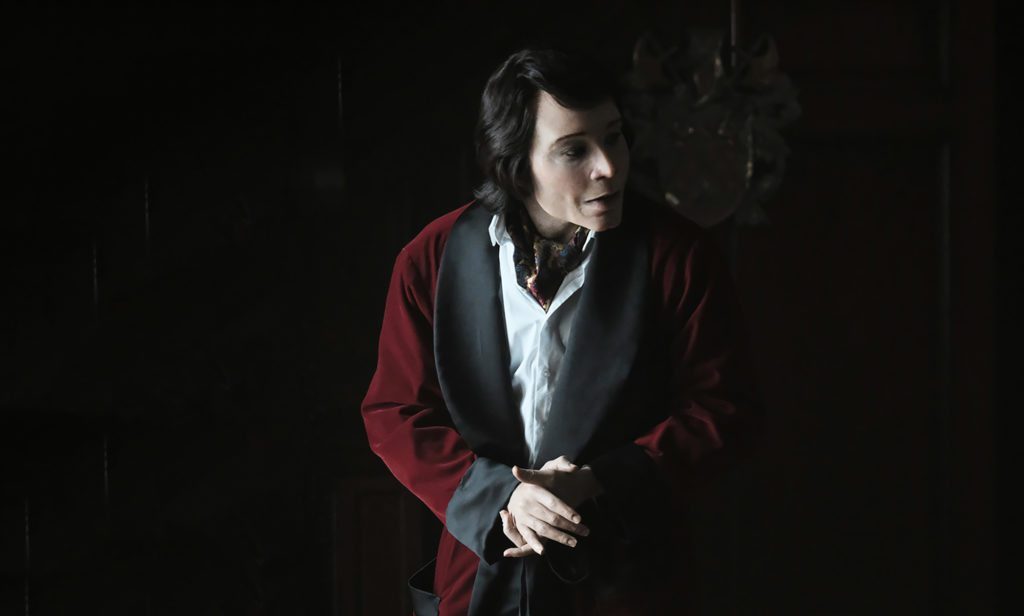 I don’t even know how to begin writing about a show like Atlanta. Each of the second season’s twelve episodes were complete works that stand on their own. “Teddy Perkins” became a cultural phenomenon and we still don’t know who was under that makeup at the Emmys. “FUBU” was the single most devastating piece of television this year, one that I am still trying to shake. The entire supporting cast from Brian Tyree Henry to Zazie Beetz to Lakeith Stanfield continue to deliver the best work of their career even as they branch out to some of the most buzzed about films of the year. 2018 has proven to be a monumental year for television in a lot of surprising ways and I stand firmly in my belief that Donald Glover and the second season of Atlanta will be remembered as one of the best examples of this exciting time.

I binged the second season of The Handmaid’s Tale in a single emotionally overwhelming weekend. I don’t really know why I put myself through that experience but I can say it made the finale all the more rewarding. I was in shock through every major moment of the finale whether it be the stabbing on the stairs, that uncomfortable Annie Lennox moment in the car, or one character’s long awaited escape. Everything about the show is at the top of its craft from the direction to the cinematography, and I am in awe of the performances that continue to surprise from Elisabeth Moss to Yvonne Strahovski to Samira Wiley and even the criminally underrated Madeline Brewer (who was robbed of an Emmy nomination this year).

The first season of Big Mouth was my favorite show of 2017, which came as a huge surprise to no one more than myself. It’s crude humor was somehow the most shockingly accurate depiction of puberty I have ever seen onscreen. The cringeworthy universal experiences portrayed have only become more acute in the second season and the animated comedy has become must-see TV. My one complaint about the first season was a frustratingly flat attempt to talk about the gay experience but in the second season the writers have righted those wrongs and only improved upon an already great comedy. Nick Kroll has found even more ways to scare audiences, this season through the shame wizard and the voicework of Maya Rusolph and Jordan Peele continues to be criminally underappreciated. The Emmys better start playing catchup in 2019.

Currently in the middle of its fourth season Superstore has become the unsung comedy of 2018. The pitch perfect ensemble somehow features a new standout every week whether it’s Lauren Ash as Dina, Kaliko Kauahi as Sandra, or Kelly Schumann as Justine. In between the ridiculous workplace scenarios the writers have even found a way to turn Superstore into one of the most relevant political comedies on television through its commentary on how corporations abuse the working class, working moms, and undocumented workers.

For a show that should be dripping in camp Pose is one of the most genuinely sincere dramas on television. Shining a light on the underground and marginalized NYC ballroom culture, Pose elevates black & brown and trans & queer voices while giving them the opportunity to tell their own history on television. I cried countless times in the pilot alone and while most queer narratives endlessly focus on a sole need for romance Pose focuses on one of the most beautiful aspects of the queer community: the need and ability to form our own families. Whether it’s a veteran actor like Billy Porter finally receiving the mainstream recognition he deserves or breakout talents like Indya Moore and Mj Rodriguez becoming the best discoveries of 2018, Pose features an ensemble that deserves to be seen and celebrated as one of the year’s best. 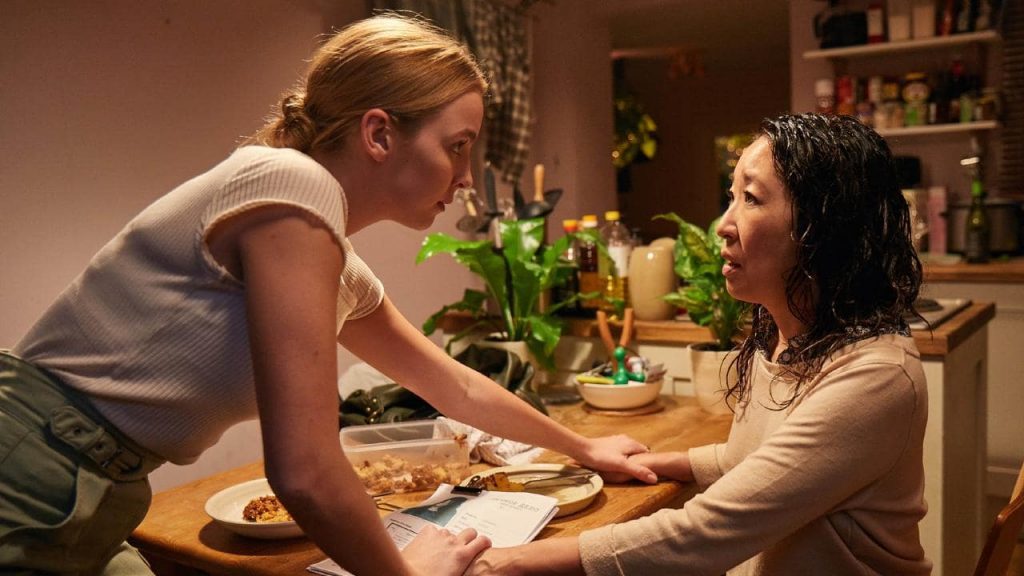 From the premiere of its first episode it became clear that Killing Eve was quickly becoming my favorite show of the year. The show’s premise about an obsessive cat and mouse game isn’t necessarily groundbreaking but Phoebe Waller-Bridge’s writing makes it feel like the most refreshing show on television and that’s what makes it exciting. That and it’s two lead performances from Sandra Oh and Jodie Comer. Watching a newcomer like Comer command attention alongside someone like Oh (who I’ve been obsessed with since Grey’s Anatomy premiered in 2005) is reason enough to start watching.

Interview: Renee Tondelli and Michael Keller on the Soundscape of Mary Poppins Returns "It Needed To Be Dipped in Realism"