The Producers Guild, which announces their nominations tomorrow, is the only other major industry group that uses the preferential ballot to determine nominees other than the Academy. They offer their 7,000 or so members ten slots to choose the best of the year, while the Academy only offers their 7,000 or so members five slots. With five, choices become much more narrowed. With ten, there is slightly more flexibility. Even still, there is a pretty good overlap between the PGA and the Academy.

To get a full picture of how the films are chosen throughout the year, it’s important to look at the other groups that gather up a list of top ten films: the Broadcast Film Critics (Critics Choice, or BFCA), American Film Institute (AFI), and the National Board of Review (NBR). The other major groups – like the BAFTA or the DGA or even the Golden Globes choose just five. And while five choices are informative, especially where the directors are concerned, they can’t really help in terms of figuring out the broader spectrum of which films might push through and which ones won’t.

Is there a film that hit all of the stops but missed the Oscars? Yes, Saving Mr. Banks. Are there films that didn’t make it on any of the other top ten lists but made it into the Oscars? Yes, Amour is one. Philomena is another. And so is the Blind Side. What those three films illustrate very very well is how much actors can play a role in choosing Best Picture. The acting branch is almost double any other branch. Philomena, The Blind Side, and Amour all had bravura performances by actors. When you want to know which film MIGHT cross over to Oscar, think about the actors. It’s not 100% a slam dunk way to go about it, but it CAN work sometimes.

Otherwise, you have a pretty good idea of how it MIGHT go. What I notice from looking at these charts is that many of these films (or at least a few of them) made it onto lists before the critics had a stab at them. That is true of Vice and of Mary Poppins Returns. As such, it’s harder to gauge what their ultimate fate will be. Other films that are tricky calls right now include A Quiet Place, which definitely has had no trouble landing on top ten lists, but it will need a large number of Academy voters supporting it, with at least 200 of them have to choose it as their number one. It should ace the PGA, but its ultimate Oscar fate is uncertain.

Films that seem like they’re headed to the PGA right now would be, in order of likelihood:

The outside long shots would be:

That totals 14, so four are going to have to miss (although just last year PGA did nominate 11 films). Since they use the preferential ballot, we might be looking at a situation of passion, as in, which films are going to end up the number one choice of many? I am hoping against hope that either First Man, Eighth Grade, or First Reformed makes the cut but my more rational mind says they won’t. And I might edge Vice slightly ahead of A Quiet Place because of the producing team behind it (Brad Pitt and Dede Gardner at Plan B). The Big Short WON the PGA, after all.

Both Bohemian Rhapsody and Crazy Rich Asians are not on any of these lists. They are featured prominently at the Globes, however, and at the SAG ensemble, which are early clues that they could possibly be figured in here.

But I don’t know, Mary Poppins could be the one that drops off. The Favourite, which did not earn the expected SAG ensemble nod, also might prove a wee bit problematic. Another film might pop up, like Can You Ever Forgive Me, or I suppose it’s probably too much to hope for that Spider-Man: Into the Spider-Verse lands in the top ten (though it absolutely would deserve to).

In terms of our elusive Best Picture winner, in almost every year except last year, the winner was always named by all of these groups. Last year, The Shape of Water was not on NBR’s top ten, neither was Three Billboards. That broke a record. That means we can’t know 100% whether our winner is one chosen by all groups once PGA rings in tomorrow, but we’ll be closer to knowing. At least it mostly confirms what we suspected all along: that the winner is probably either Black Panther, A Star Is Born, or Roma, while Green Book is still in it. Folding in Globes and SAG ensemble you are looking at a Black Panther vs. A Star Is Born showdown, though Ryan Coogler has to be on the DGA’s five — which I can’t imagine he won’t be at this rate.

Here are the charts and our predictions. It’s all happening!

Don’t forget to enter our contest! 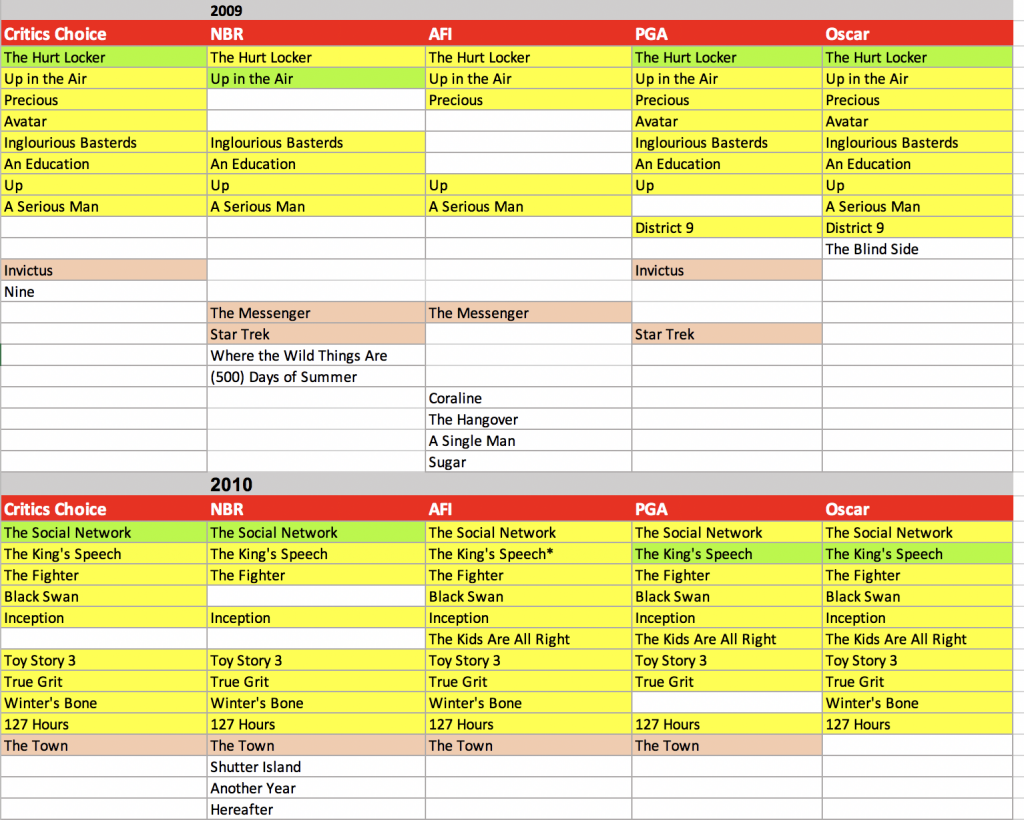 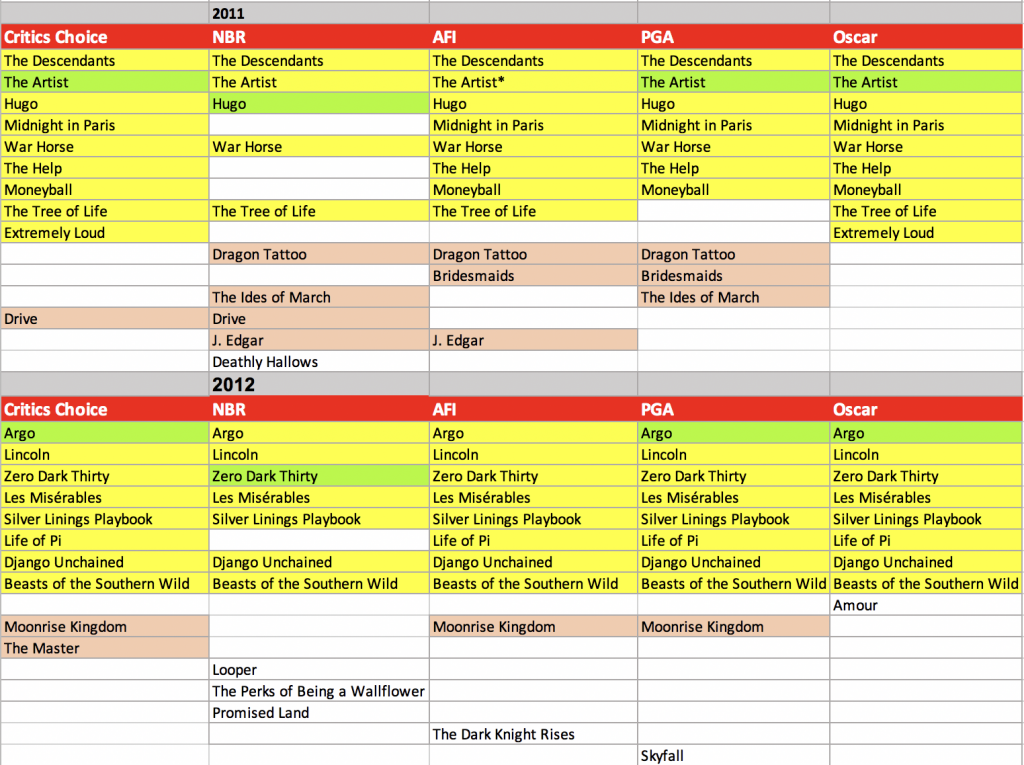 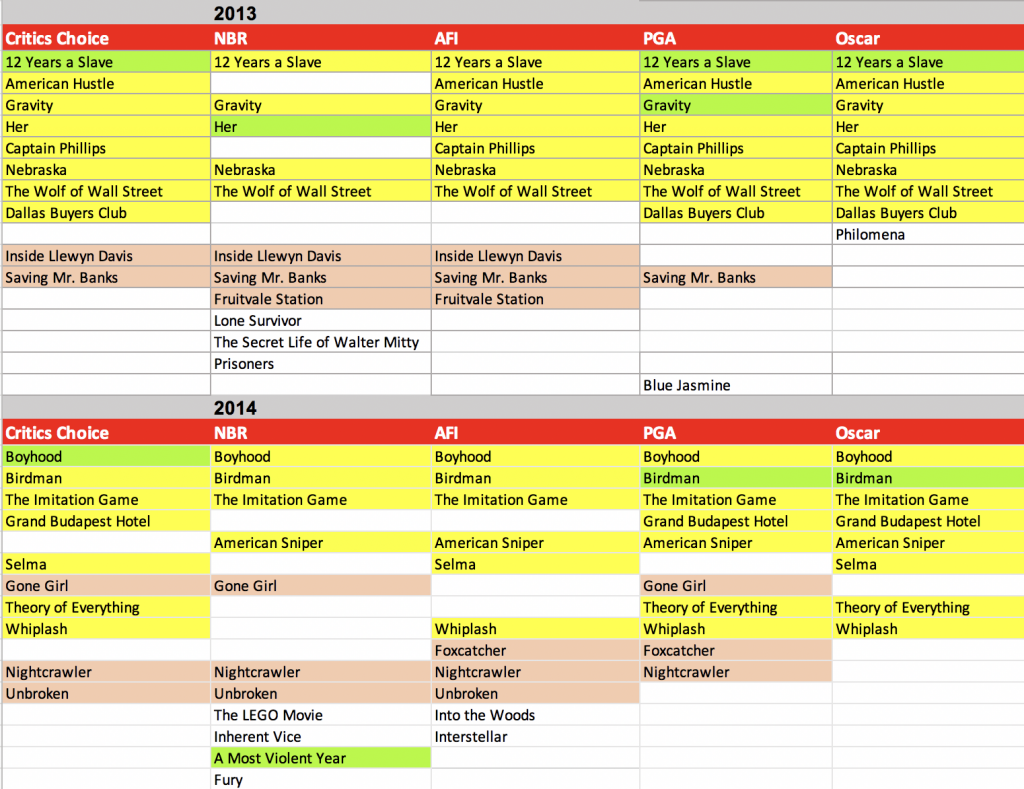 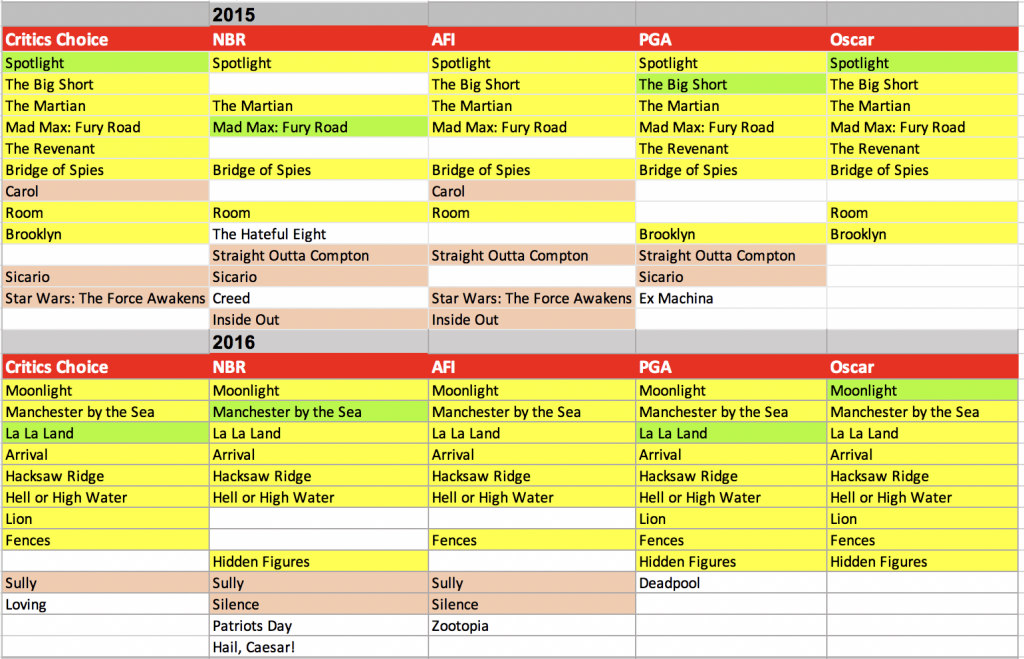 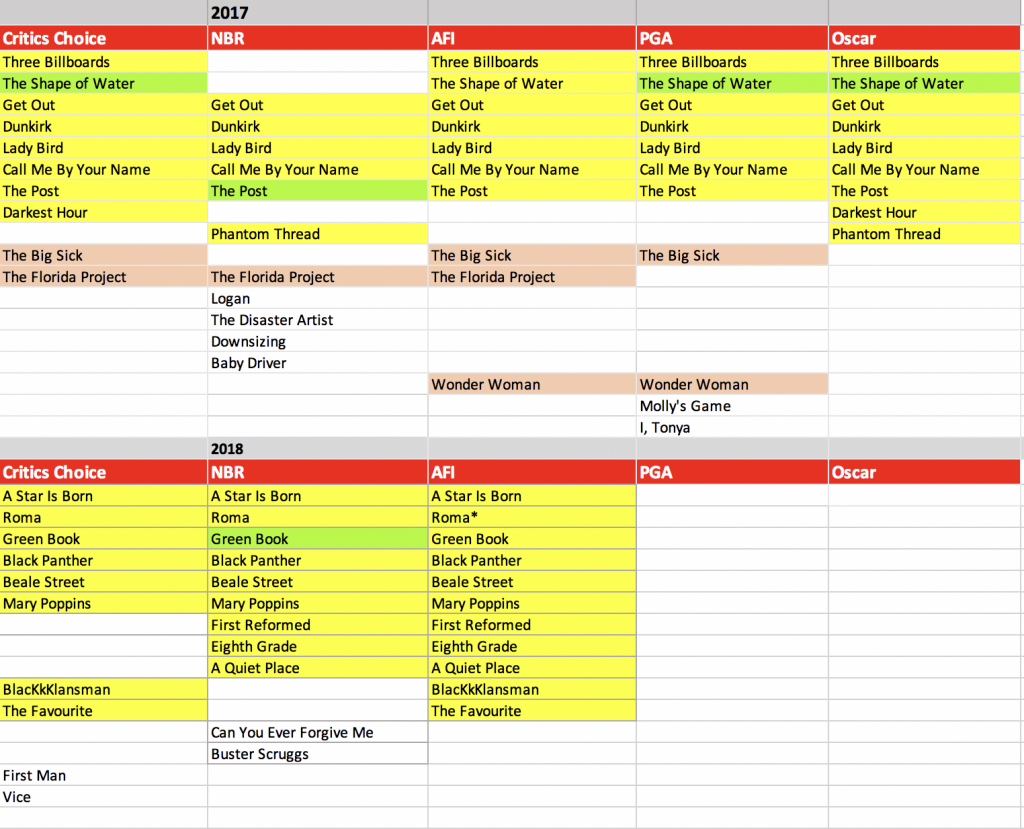