by Sasha Stone
in BEST PICTURE, featured, The State of the Race
416

Every year it’s the same story. Right around the time Oscar voting begins, controversy hits. Sometimes it’s manageable. In the old days, there was a way around a controversy. You could apologize, for instance. But now, we’re living in a time of mass hysteria in the Trump era. We are ruled by fear and panic, so that anyone who is accused of anything (mainly racism, sex offenses, homophobia) comes to personify the accusation. Once proof is found — the same way a small red spot on a woman’s breast was proof of a suckling familiar and thus proof of witchcraft — so too can one tweet pretty much end a career.

The Oscar race for Best Picture used to be, for the most part, about two things: what film do people like the best, and what film “deserves” to win. That second part is where we have a problem now. What does “deserve” mean now? Well, it means your entire history could come under scrutiny if you’re a threat. It means that your movie can’t just be good — it has to completely satisfy the requirements of an industry seeking to right the wrongs of the past, right the wrongs of the Oscars. It has to offend no one.

This requirement, at least the way you’d hear it from Film Twitter, is more important than even how popular a film is. For a while, it was looking like popular was going to be the way forward to head off a popular film category in the future. But now, as the race narrows significantly, we’re looking at a small handful of films. And they are:

With Green Book the biggest threat right now, it’s not surprising that it would find itself at the center of controversy. And it apparently wasn’t even at the hands of rival studios but rather the wrath of angry Woketopians — white woke film Twitter saviors preserving our shining city on a hill by purging the village of sinners. There is no talking about it, no asking questions, no conversations, nothing. Just accuse! And then drag them into the public square and virtually stone them. It’s not all that different from how Twitter operates on a daily basis. It’s just that this time it’s impacting the Oscar race.

First, a few high status film tweeters tell people who liked a film that they should not like it because it’s “racist.” But then when they come up against the obvious obstacle that the film keeps winning anyway, new digging needs to be done. In the case of Green Book, that digging came in the form of unearthing on-set behavior by director Peter Farrelly from years ago, and searching through old tweets of one of the film’s writers to uncover either Trump support or, in this case, a troubling tweet about Muslims. It was a horrifying tweet. One that should never have been made — but, as Ryan has pointed out to me, it may be that Nick Vallelonga really thought he saw something on TV, and believed that it was true because someone showed him video footage of it. Doesn’t matter, though, because no one would ever care to ask. He’s accused, there’s the tweet to prove it. That was all it took. Shock waves of mass hysteria rocked Twitter. Yes, it’s still Twitter so far but they’re all hoping that if they couldn’t make people not like it by traditional means (talking about the movie itself), then further steps had to be taken to ensure Green Book did not… wait for it… win any statues. 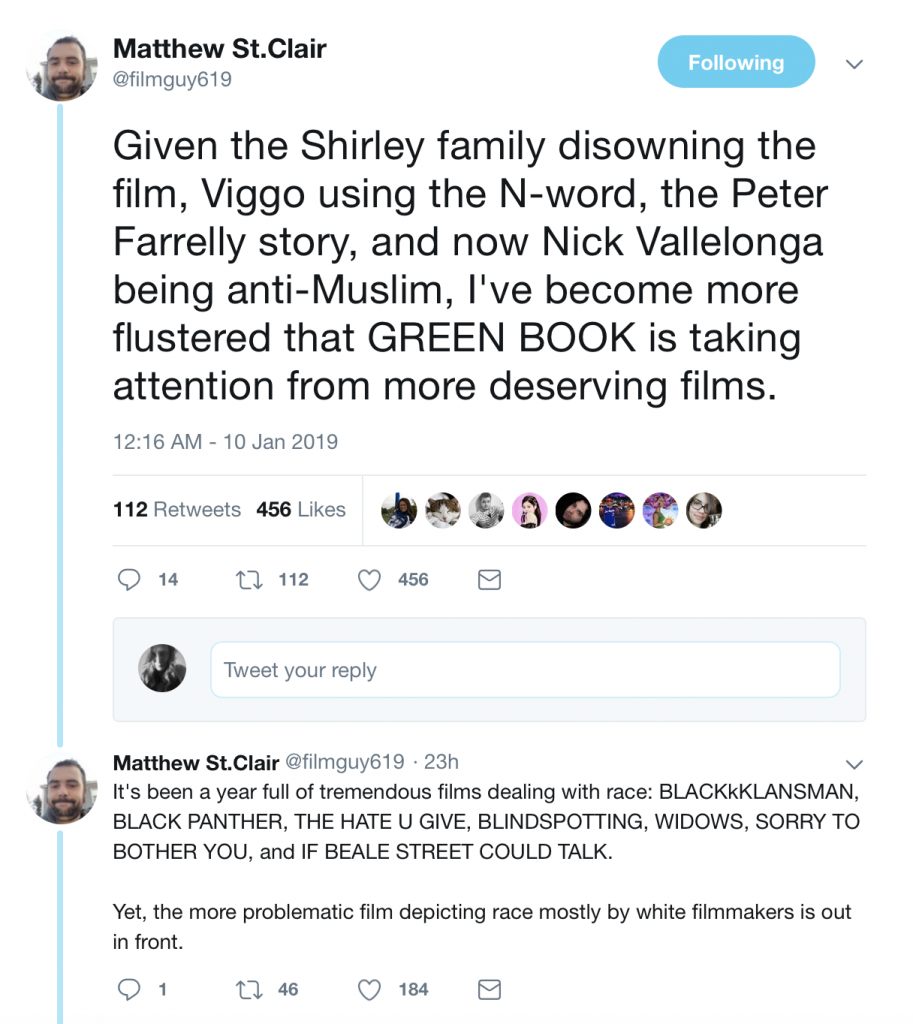 Literally, that is all we’re talking about here. Statues. Gold statues. The stuff that dreams (or this case, nightmares) are made of. Here they were one day making a movie a lot of people seem to like, a movie that wins the audience award in Toronto, wins the Golden Globe, and the next day their careers might be over.

THAT’S TOO BAD, say the high status leaders of Woketopia, those who truly believe that Green Book winning the Oscar is the worst thing that could happen in America. THEY DESERVE IT! They scream. At best, that’s what we get. At worse we get a lot of tongue clucking and lectures by high minded folks who are here to set everyone straight about what “deserves” and doesn’t “deserve” the Oscar. I’m referring not to black critics, BTW, but to certain white critics who scream the loudest.

Just like those accused in Salem had no way out, so do those accused today have no real way out. Peter Farrelly will be thought of only as the guy who showed his penis on set. Tony Vallelonga will from now on be considered a racist and/or a xenophobe. Done and done. And guess what? Woketopia is not only okay with that, they’re ready for more. And more and more.

This has greatly impacted how the race is covered, as bloggers scan each project for un-wokeness. Films by and about white males are mostly fair game for any kind of attack, and hopefully will eventually be just completely shunned. One tweet would be all it took to send a wave of hysteria through the hive mind and suddenly that film, too, is problematic. And anyone who likes the film or votes for the film is likewise caught up in that shitstorm.

It’s not a surprise that this all started the year Donald Trump took office with La La Land. All it took was one person to say that it was offensive that Ryan Gosling’s character was going to “save” jazz. That started the wave and before long, the film was battered and accused of everything imaginable. There was no way it could win Best Picture, not when standing alongside the justifiably noble Moonlight, which had zero problems and was how Woketopia wanted to see itself represented at the Oscars. No doubt, Moonlight is great and deserved to win Oscars. That’s not the point. The point is what happened to La La Land.

Some of us might have thought, well, okay fine. It’s just La La Land. But Kathryn Bigelow’s Detroit was criticized and shunned because it was white filmmakers making a story about race and police brutality. That didn’t go well. Sofia Coppola made a huge mistake by omitting a black character in The Beguiled. She was called out as a racist, flat out, with even Lost in Translation being dragged into it. Then, last year, it was Three Billboards Outside Ebbing, Missouri, which made a joke about police brutality.

When I heard about how much Green Book was liked, the first thing I thought was — white filmmakers telling a story about race are going to get creamed. It didn’t matter how good it was. It’s simply not possible, in today’s climate, for any white person to tell a story about race. White people, white men specifically, are considered the enemy unless they arm themselves by becoming Woke Warriors, which many of them have done. Once white filmmakers only make stories about white characters they are criticized for that too. First Man was attacked for being a film about Neil Armstrong, and Chazelle got blamed for the lack of black men in the 1960s NASA Mission Control room.

At first it seemed like Bohemian Rhapsody was going to incur most of the wrath from the Woketopians. People even pounced on Elsie Fisher for expressing her love for that film right after it won Best Film at the Globes. But that was just a snack. It didn’t satisfy and there didn’t seem to be any way they could take down a movie that keeps showing up places and has made $200 million. But Green Book? Maybe that is the bigger threat. Maybe that could potentially threaten the films Woketopia wants to win instead.

What’s really going on right now is twofold. One is that we’re ruled by fear and panic. We’re scared. We are still reacting to the dramatic change we experienced in 2016 when Trump became president. It so flew in the face of everything we on the Left had begun to count on, and made us all feel powerless. Enter social media and the hive mind. Now, we have power. Social media gave voice to the voiceless and enabled large groups of people to show their support or their disapproval of anything put before them.

That makes the job of watching the Oscar race, writing about it, predicting it especially tough. What is the most “deserving” and why? Have we just thrown how good a movie is out the window? And why hasn’t Black Panther done better in this climate, and why are Bohemian Rhapsody and Green Book doing well in this climate? So many Woketopians are looking to the Oscars to be the ultimate barometer of morality in our city on the hill.

As Oscar voters fill out their ballots, what will they be thinking? The producer of La La Land, Jordan Horowitz — himself a prior target of the angry mob — set himself apart by going after Tony Vallelonga hard on Twitter. He was ashamed that his industry had given Green Book any prizes at all. And that might be enough to finally kill the film’s chances. The story has bled out to the mainstream press — a dark and sinister tale, where every terrible thing done by the filmmakers is heaped upon the criticisms people have of the film itself until Green Book — a benign, entertaining, somewhat moving MOVIE — becomes the embodiment of Donald Trump himself: an evil thing that must be purged.

Yes, children, YES! We purge the village of the sinners to keep the village pure and righteous. No, we can’t do anything about Donald Trump. We can’t stop carbon emissions pollution from wrecking the environment. We can’t stop the hundreds — thousands — of dying refugees fleeing for their lives, we can’t save pigs from gestation crates, we can’t stop the coming floods, hurricanes, mass starvation, police shootings, church shootings, school shootings. But we sure as hell can stop Green Book. That we can do. And so it was on this day that the proud Woketopians wiped their sweaty brows, snapped their laptops closed, and breathed a sigh of relief that their work is done.