The Screen Actors Guild (SAG) Awards will be announced Sunday night, and they often provide a critically important look at how the Oscar field looks on the film side. But using the SAG TV Awards to predict future Emmy success is a far shakier enterprise. Where the SAG Awards are perfectly positioned around the Oscar voting window, SAG announces their TV awards a good five months before the Television Academy even starts voting. A lot can change in the pop culture landscape over the course of five months. Trends change. Politics change. Personal tastes change. The memory fades.

Take Netflix’s GLOW for instance. The 2018 SAG voting body warmly embraced the series, handing down Comedy nominations for Actress (Alison Brie), Actor (Marc Maron), Cast and Stunts. It ultimately went home empty-handed, but with a haul like that, how could it miss come Emmy time? Well, months later, the Television Academy ignored both SAG-nominated actors and mentioned the only other major performance from the series not recognized by SAG – Betty Gilpin.

There are other curious cases of actors routinely nominated or awarded without similar Emmy blessings. Orange Is the New Black‘s Uzo Aduba received a nomination last year, but Emmy eventually passed on the same material. William H. Macy won three SAG trophies for his Shameless performance without similar Emmy love. And This Is Us received last year’s Drama Series win (the “Ensemble” award is widely considered the equivalent of a series win), but Emmy fell out of love with it five month later.

Now, some of this has to do more with the voting windows than with actual reactions to the material. The SAG eligibility window runs closer to the calendar year. Emmy runs with a window reflective of traditional TV seasons, ending on May 31 each year.  So, you unfortunately end up with series in competition at SAG that don’t run against each other at the Emmys. This year, Sharp Objects and Escape at Dannemora compete against The Assassination of Gianni Versace: American Crime Story. Season 2 of The Handmaid’s Tale faces Season 2 of Ozark. These match-ups won’t exist come Emmy time, so using SAG as a prediction barometer becomes an “at your own risk” venture.

So with that in mind, who looks ahead to take home a win in the SAG TV races?

Outstanding Performance by an Ensemble in a Drama Series

There are several viable possibilities for a win here. Netflix’s Ozark stunned with a whopping four nominations, including a surprise nomination for Lead Actress Julia Garner. So, judging from that reaction, you’d think Ozark stood as the front runner. Well, yes and no. FX’s The Americans is on an interesting year-end trajectory for its final season. After being largely ignored at September’s Emmy ceremony, it picked up several year-end critics awards, including winning the Golden Globe for drama series. That’s even more shocking considering the Globes had barely even nominated the series in its five-year run. So, it would seem likely to win here as well. Except… neither of its leading actors – Matthew Rhys and Keri Russell – were nominated in their respective categories.

The Handmaid’s Tale lost to This Is Us last year, and there’s a theory that SAG likes to play catch-up. So, there’s an argument that it wins for its controversial second season after being shut out at the 2018 Primetime Emmy Awards. Better Call Saul received acclaim for its latest season and has picked up several nominations for its cast and series in recent weeks. Yet, it doesn’t feel like a front runner. I have little to base that on other than a gut feeling. Which probably means it wins. Still, many people are predicting repeat win for This Is Us because actors simply love the show. Personally, I’m predicting an Ozark win based on both its nomination haul and the likelihood that star Jason Bateman takes home the Male Actor in a Drama Series trophy over This Is Us‘s Sterling K. Brown. Too bad Killing Eve didn’t make the cut…

Outstanding Performance by an Ensemble in a Comedy Series

Last year, Amazon’s The Marvelous Mrs. Maisel likely came out too late in the year to register with the SAG voting body. So, they’re playing catch-up this year having likely not seen its second season, indicating that Maisel is the likely winner here. Certainly star Rachel Brosnahan is a slam dunk to win in her first SAG nomination. Atlanta and GLOW all feel like also-rans with Atlanta not registering in any acting race and GLOW missing that Marc Maron nomination. Barry perhaps registers strongly with the actors given its actor-friendly storylines. That might be enough to position it as a challenge to Maisel if not for Netflix’s recent The Kominsky Method, a series that has surprisingly popped in many awards bodies. That bodes well for potential Emmy glory, but we’re getting ahead of ourselves.

SAG basically loves three comedies this year: Barry, Maisel, and Kominsky. Each series received multiple nominations with supporting players (Winkler, Borstein/Shalhoub, and Arkin) elevated to lead races. Remember that SAG doesn’t have supporting TV categories. But it’s Maisel that registered with three acting nominations, which indicates broad support for the acclaimed series. After not nominating it last year, there’s probably no way it doesn’t go home with comedy wins in the Ensemble and Lead Actress races. Kominsky will have to settle for a Michael Douglas win with SAG-beloved William H. Macy not in the running. That is, unless the Barry / Kominsky actors split their votes and Tony Shalhoub walks away with it.

Outstanding Performance by an Ensemble in a Limited Series

Oh wait… That category DOESN’T EXIST for some reason, so we’ll have to look at the performance races. In the Female Actor race, the immediate reaction is to predict Amy Adams, one of the hottest actresses around right now, for her stunning work in Sharp Objects. But Escape at Dannemora‘s Patricia Arquette turned in career-best work. And then there’s the great Patricia Clarkson whose delicate, villanous performance stole scenes from her celebrated co-star. Any one of these three actresses could win honestly. How about a 3-way tie? No? Then, let’s say it’s Patricia Arquette if those Sharp Objects fans can’t decide between the two nominated actresses.

The Male Actor race is far easier to predict. Versace’s Darren Criss hasn’t lost a single major award for his career-redefining performance in Ryan Murphy’s epic. There’s absolutely no reason to think he won’t repeat here for his final awards run for the performance. The closest competitor and slight spoiler could be Hugh Grant for his work in A Very English Scandal, although co-star Ben Whishaw (not nominated here) has been getting most of the attention.

Find out who will take home the SAG TV trophies Sunday night at 8pm ET / 5pm PT on TBS and TNT. 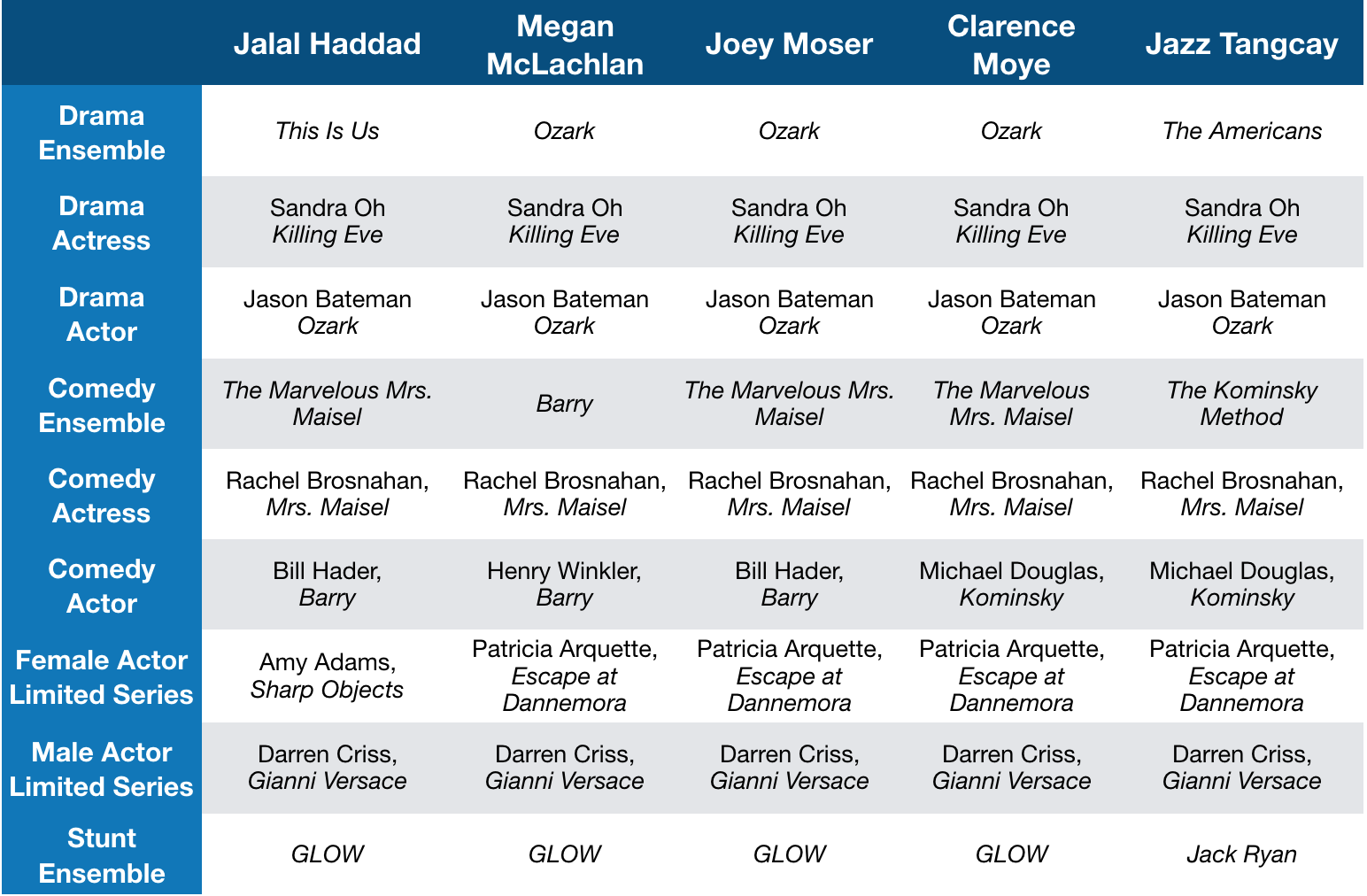