< Cormac Bluestone Fulfills a Personal Dream with Scoring 'The Cool Kids' - Awardsdaily - The Oscars, the Films and everything in between.
No Result
View All Result

The television sitcom theme song is dying, but composer Cormac Bluestone is here to rescue it!

Before I first tuned in to watch FOX’s The Cool Kids, I knew that I would love it. Starring Vicki Lawrence, David Alan Grier, Leslie Jordan and Martin Mull, the show centers on four friends living at a retirement community, but this group isn’t going quietly. They are one of the best quartets currently on television, and their chemistry harkens back to Will & Grace or The Golden Girls.

Bluestone has worked on many comedies like It’s Always Sunny in Philadelphia, and his short film work is worth the deep dive–Drew Droege’s Masc Only is especially fun. With each project, he’s able to tap into the quirkiness of the characters or the ridiculous situation they find themselves in. The tone for The Cool Kids is set from the very start with Bluestone’s cool, jazzy opener. It leads you into the precise tone this underrated show is about to deliver.

After all, don’t you want a relaxed, bluesey tune to get you in the mood for swing-dancing seniors? I know I do.

I have to admit that I love The Cool Kids. My husband and I make sure we watch it every Friday night.

It’s great to hear that. I love it. I can’t believe I get to work on a show with four of my heroes.

It must be gratifying that you get to write themes and incidental music for these performers you love so much.

100%. By the time you get to episode 10, you’re just trying to hold onto your job. It’s surreal to write music for people that I’ve watched for so many years. I’ve worked on a lot of things where I fall in love with people as it goes along, but with The Cool Kids, it was love at first sight. I wondered what I actually brought to the table.

The Cool Kids is very much a traditional sitcom that we don’t see anymore. The way TV is evolving, we don’t see a lot of shows like this. Were you looking to do something in this vein?

Absolutely. I grew up on the sitcom. Over the past decade you’ve seen multi-cam almost fade away in these last two cycles. Getting to work on one is sort of a dream. Getting to write the theme and the cues, it is a lifelong dream. I’m with you in thinking that we wouldn’t see shows where the entire premise is to sit back and you’re going to give them your half hour. We’re going to have a good time, not to think too hard–it’s Friday night!

It does feel nostalgic in the best ways. When I first heard about it, it reminded me of The Golden Girls, but at the same time, there’s just a really strong core of actors who can deliver comedy. Speaking of the theme, how did you start that? Or did you write the music first?

I’m so glad you asked! Essentially, I worked with Charlie Day (who I worked with on It’s Always Sunny in Philadelphia) and they had a clip that they really liked of this old guy dancing. Then it was a licensing issue. When I first read the script, I thought of the opening of White Men Can’t Jump with this Venice Beach Boys singing “Just a Closer Walk with Thee.” I just thought of that groove and it’s so laid-back and it’s accessible. Ironically, Charlie then sent me a cue from Allen Touissant’s “Yes We Can Can” which he wrote for The Pointer Sisters in the 70’s, but he re-recorded in the 2000’s, I think. The one thing both ideas have was a New Orleans groove. We took it from there. I turned around 15 or 20 versions, and I’d text odd recordings of it to Charlie and got feedback. We thought of adding lyrics to it since we’re fans of the classic sitcom. After 20 demos, we went with number 14 which was an instrumental I’d done. It had the New Orleans back beat with the Creedence Clearwater guitar on top. That’s how we landed. It was all the pieces mixed together. 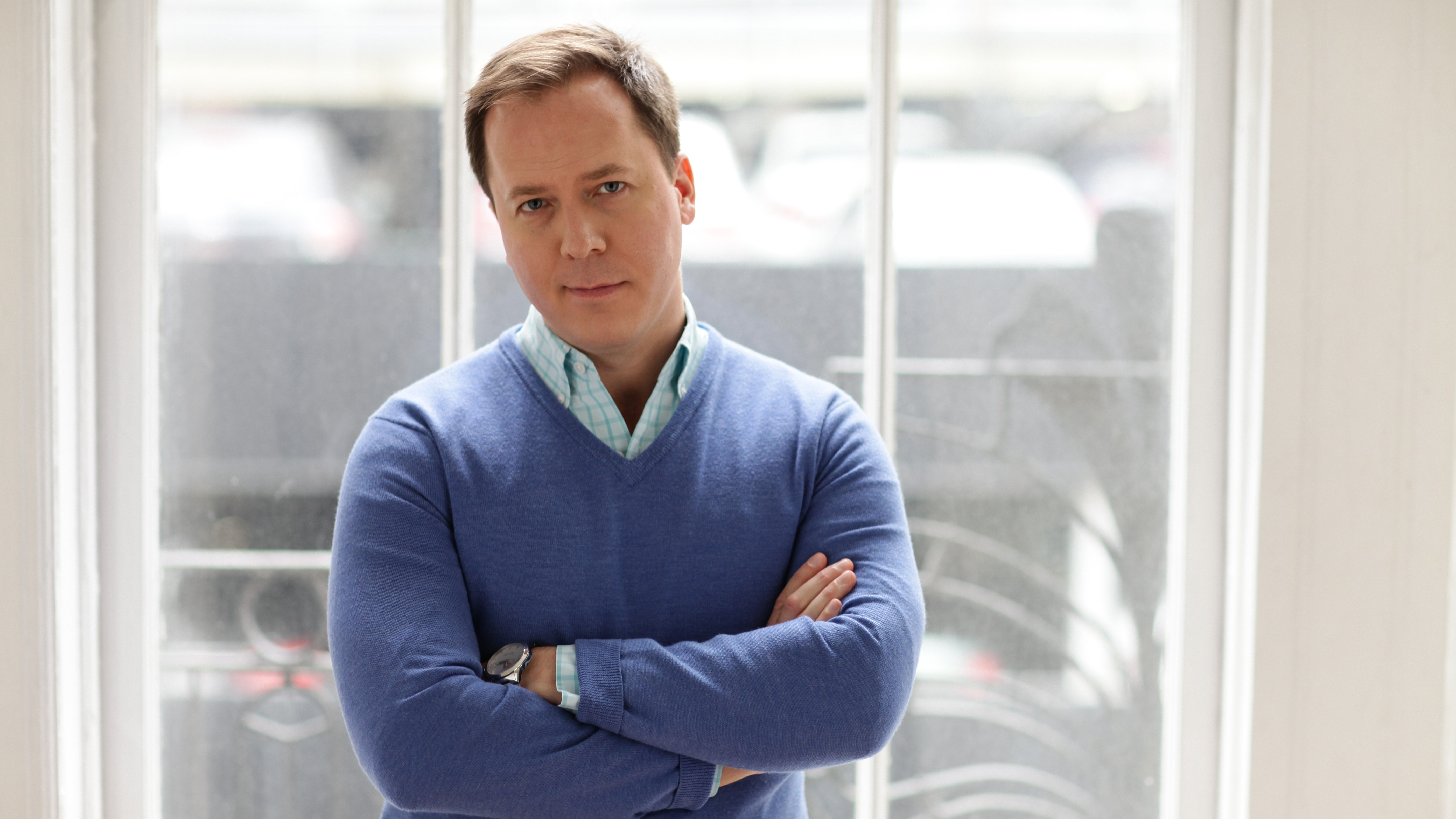 I get that theme song stuck in my head when I watch the show. I really think that relaxed air from the theme captures the essence of the show.

All I wanted to do is create something that would make you tap your toes. My favorite theme songs growing up, I would listen to them over and over. I remember my dad getting annoyed with me when I was little and I insisted on watching the theme. I told him, ‘You can’t watch the show without watching the opening credits!’ It’s setting us up.

I sort of hate it that shows on Netflix give you the option to skip ahead now. The theme song gets you into the mood of watching your favorite shows.

I 100% agree. I’m re-watching Cheers right now and it’s so disappointing when that skip option pops up. I felt bad any time I did it. I didn’t even understand the episode after I did that.

You do a lot of writing for comedies. Do you just gravitate towards kooky people or is that purely a coincidence?

I’ve always loved comedy. It’s where I’ve had the most success. I think it’s kind of what I’m good at. Before I was doing TV, I was writing for theater, but comedy is something I always gravitated to.

Who doesn’t want to contribute towards something that makes people feel good?

I agree. And I love dramas. I’m always looking for something that I can sink my teeth into, but I think the best comedies have strong drama. The Cool Kids has given us some real things to talk about this season.

Not to ask a super generic question, but how do you like to work? Do you like to see the material and score to it or just get the feel for the character?

I like producers to feel like they are in good hands. It sometimes depends on where they are, so you might have to work a different way depending on the project. I like to jump in and score to picture. When I start to think about themes, I like to think about the whole thing or the big picture. I just try to crank it out before it disappears into the ether. It’s about workflow and execution. In TV, you don’t get a lot of time, so it’s made me just sit down and write. Sometimes that’s just what you have to do, and I’ve grown to love that process. Just sitting down and starting at the beginning and finishing at the end.

I like having the pressure too. Sometimes the first reactions to things are the most honest.

You initially brought up It’s Always Sunny, and I have a ton of friends who are begging me to ask about “The Nightman Cometh.” How does it feel to create something that has such a lasting legacy.

I am one of like 30 people who made that. I always like to remind people of that. I co-wrote the music with Charlie, and, in my mind, it’s an honor. It’s one of the greatest thing I’ve ever gotten to do. We got to do a live tour, and it one of the best times of my life to play that music with the cast. I never get tired of people asking me about it. It’s such a great episode. I’d be remiss in saying that one of the best things we did was encouraging that we had to do it live. We had to do it live. We can’t film people lip syncing. The cast is so talented, and that’s a big element to it. It was even shot like a play and the cast is there live singing it. It’s real. We did it in a 12-minute take.

Our director, Matt Shakman, has a theater background. His idea was to see how much of it we could do as a play. We literally had a day of rehearsal on set and worked out the music. You just don’t get to do that a lot with TV. Ironically, with every episode of Sunny that I’ve worked on, we’ve had a day of rehearsal with the singing. It’s a huge feather in my cap.

I just checked out Overthinking with Kat and June. I think it’s so fun and unique. The music you score, especially when we start to meet these two girls, feels like the music that could play inside your own head. Was that what you were going for?

You’re literally reading my mind. That was such a fun experience. I felt like I was on the same page with the creators and the producers from our very first meeting. I really wanted the music to be emblematic of what those two girls were walking around with. Ally McBeal would always walk around with a song in her head–a theme that kind of made her crazy. I wanted to find out the music that these characters would walk around with. What would be in their heads without winking at it. I wanted it to be true.

I feel like sometimes people have a weird bias towards newer streaming platforms.

I hope people find it.

I’m really hoping The Cool Kids gets picked up for another season. I’m going to be so pissed if it doesn’t…

Me too! Our numbers look good. You’ll know before I do, so maybe you will have to let me know.

Joey is a writer and father of two fur babies. He currently lives in Columbus, OH. If you would like to talk to Joey about cheese or Julianne Moore, follow him on Twitter or Instagram.