Fauna Hodel lived a life so absurd you would never believe it to be true. Believed to be born to Black mother in 19450s Reno, Nevada Fauna Hodel (portrayed by India Eisley) then discovers as a teenager her real birth certificate and embarks on a road trip to Los Angeles in search of the truth. Along the way she teams up with a disgraced reporter (Chris Pine) and begins to unwind the horrifying truths of her origins, her biological family, and their connection to the Black Dahlia murder.

Director Patty Jenkins met Fauna over twelve years ago for lunch and was in complete awe of her story. “She told chapter after chapter of incredible stories and my jaw was on the floor. I was overwhelmed by how dark it was but I couldn’t stop thinking about it.” Jenkins told the audience how she couldn’t shake the story and had been trying for years to find the right angle for the story eventually working with frequent collaborator Chris Pine and husband Sam Sheridan. “Sam blended a bunch of characters from the time together and created Chris’s character Jay Sheridan.  I was blown away by what Sam came up with and knew it was the time.”

Fauna’s story naturally comes with so much complicated material that writer/producer Sam Sheridan was initially weary of adapting it until he found the perfect vantage point. From the seedy underbelly of 1960s Hollywood to the murder of Elisabeth Short to the Watts Riots the series had a lot to naturally cover. “Once I heard that Chris [Pine] was interested I knew a classic noir character was the right way to narratively pace and define the story. It also gave the darkness of the series some comic relief. His character really was the eureka moment.”

The story of Fauna Hodel is clearly based off of the life of a real person and family (with her daughter’s proudly in attendance to honor their late mother) so it came as a huge surprise that the other protagonist of the story, reporter Jay Singletary was completely devised by Sheridan, Jenkins, and Pine. Jay Singletary represented multiple reporters of the era who had their careers destroyed after attempting to uncover shocking stories of the rich and powerful of the city. Sheridan, in classic noir fashion, was also a character that battled plenty of inner demons including PTSD from serving in Korea and a heroin addiction.

Audiences, critics, and peers alike have raved over Pine’s performance labeling it as career-best work. Pine played a pivotal role in developing the character with Sheridan in the development stage and described to the audience some of the research he performed. “For me the big eureka moment was a beautiful book called Matterhorn by Karl Marlantes. He spoke about a ritual of men coming home from war and how men in the civilized world are now thrown into war without any supportive way of being brought back into our world. One aspect of his work that stuck with me was the euphoria of killing and the inability of reconciling the animalistic feeling with what he is expected to be at home. That really gave me a window into Jay and his mirroring of the antagonist of seeing himself in this monster.” 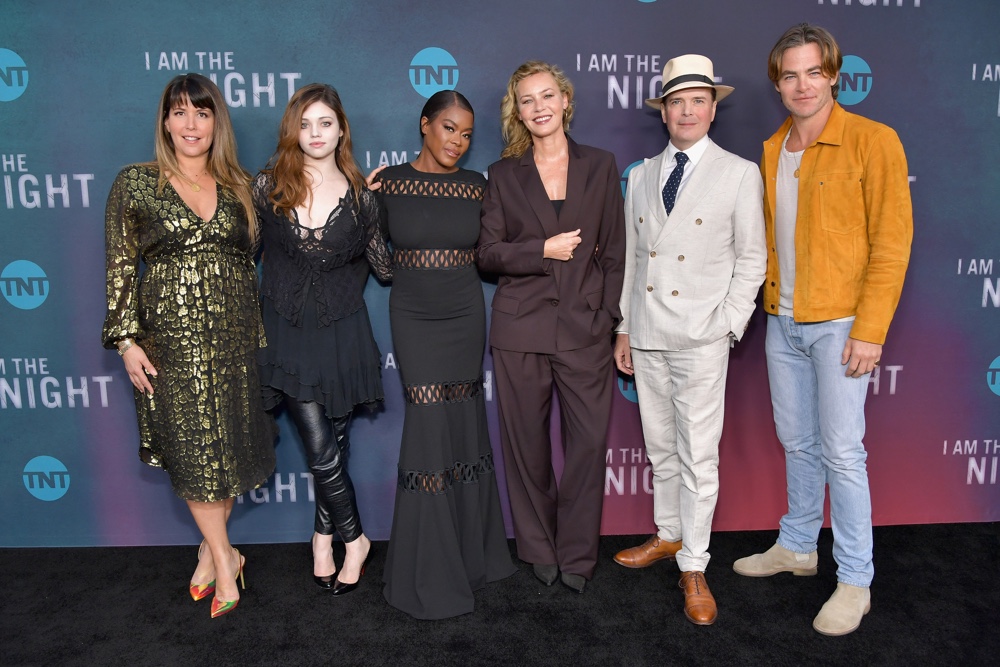 The lurking figure at the center of the story is none other than George Hodel portrayed sinisterly by Jefferson Mays. Hodel, prominent figure in Los Angeles at the time, was able to use his power to get away with a lot of crime including a sodomy case against his own teenage daughter and the alleged murders of multiple women in the area. As terrifying as the audience was by Mays’ performance he completely charmed Emmy voters in describing how he threw himself into the role. “It demanded a lot of malevolent lurking.”

On a more serious note Mays’ went into detail on the research he did into George Hodel’s life which included first-hand accounts from the figure’s family. “I began to steep myself into the book Black Dahlia Avenger written by Hodel’s son which is a rather savage inditement of his father. I focused less on the alleged crimes and more on the son’s memories of his father: how he spoke, how he carried himself and so on.”

I Am The Night also stands out as Patty Jenkins’ first project after the global success of Wonder Woman. The entire cast and crew gushed over their love and respect for the beloved director.  Star India Eisley described working with Jenkins as an absolute dream. “She’s a very human director which I find rare. She has a genuine curiosity because she’s a people person.”

Actress Connie Nielsen has worked with Jenkins on multiple projects including Wonder Woman and its upcoming sequel and she explained why she keeps coming back. “As an artist, you are so safe working with Patty. She is a fearless woman that allows you to be completely free and open as an actor. You’re also always learning alongside her. She has an incredibly strong understanding of humankind. Also as a female director, I see feel seen working with her.”

As the Q&A came to an end Jenkins could not stress enough that at the end of the day the project owes all of its success to the incredible resilience of the late Fauna Hodel and her story. “Her story really makes you ask the question of what do the definitions of who you are mean She had every odd circumstance thrown at her but she beat every single one of them and took control of her life.”

Emmys FYC: The Cast of 'Better Things' Celebrate Pamela Adlon as an Essential and Refreshing Voice in TV Comedy