Following last night’s all-star zombie-fest, the highly regarded Cannes sidebar Director’s Fortnight opened this morning with another off-kilter comedy that explores human obsession and all its funny/gory details. DEERSKIN, French director Quentin Dupieux’s 7th feature, is high-concept and weird AF. It’s not for everybody, but those with a twisted sense of humor and willing to let reason take a backseat for a minute will have a swell time.

The film is about Georges (Oscar winner Jean Dujardin of THE ARTIST fame), a nondescript middle-aged man presented to us without any back story. We know Georges has marital problems from a brief telephone exchange that ended with his bank account being blocked by his wife. Other than that, no motivation or clues are ever offered for any of Georges’ actions, however bizarre/borderline psychotic they may seem. You just have to go along with it or risk being completely left out even before the half-hour mark.

So one day Georges, while tanking his car, takes a look at his reflection and something in him is triggered. He walks into the gas station restroom, stuffs his perfectly decent corduroy jacket down the toilet and flushes with such vehemence it feels like an act of utter disgust/hate. Georges then silently drives into the mountains where he uses basically all his savings to buy a used, 100% deerskin jacket from an overjoyed old man who, probably out of guilt for the swindle, gives him a second-hand digital camera as something extra.

Georges is overwhelmed by this new jacket – to put it mildly. With money he doesn’t have, he checks into a hotel to be alone with his prized possession. Soon he’s having conversations with a piece of clothing who informs Georges that its biggest dream is to strip all others of their jackets and being the only one left in the world. As Georges sets out to realize that unusual dream, he enlists the help of an (unknowing?) accomplice in the form of the local bar waitress (Adèle Haenel) to whom he lies about being a filmmaker, despite having just picked up a camera that same day. From there things get violent. 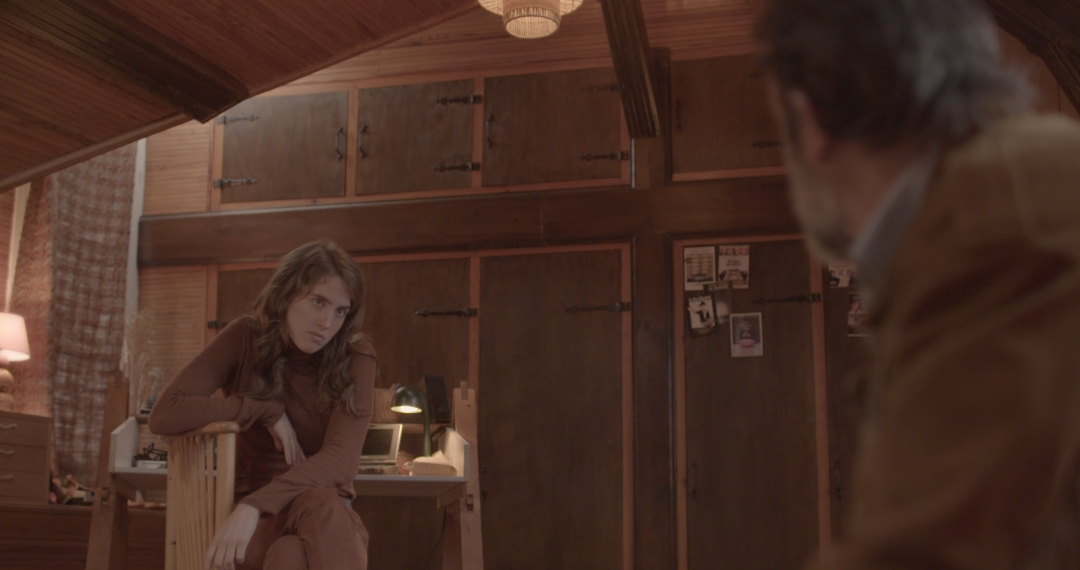 All this might sound like a lot, and the film really is asking a lot of the viewer in terms of suspension of disbelief, whether it’s merited or not. For the most part, I think, the film is successful in this regard. Not necessarily in the sense that it has always earned your trust, but that it can be quite persuasive in suggesting what fun it would be to indulge in pure follies for a while.

As with most of Dupieux’s previous films, the story of DEERSKIN is essentially What If-based. What if we just up and leave everything behind to live in the mountains? What if we just spend all our money on a jacket? What if we love a jacket so much we can’t stand the sight of anyone else wearing (an inferior) one? Dupieux, who has made a name for himself with his unique brand of absurdist filmmaking (his most internationally known work to date being RUBBER, a film about a homicidal car tire), is very good at creating worlds that look familiar but feel eerily untethered to reality, a blank, dream-like vacuum which allows for such exercise in completely random, moral-free imagination. And he has the guts to see it through to the ridiculous, grisly end. The result is something that does not preach, judge or rationalize, but simply presents a series of events where someone succumbs to their innermost impulse at every turn. It’s often hilarious, consistently preposterous, yet somehow on a deep, human level, relatable as well.

Over at the festival Palais, the first French competition entry, director Ladj Ly’s feature debut LES MISÉRABLES also premiered. Inspired by the 2005 Paris riots, this gritty police drama takes its time to kick into gear but once it does, it grabs you with such breathtaking intensity it’s hard not to be impressed.

The story centers around a three-man police unit in the suburbs of Paris (where Victor Hugo’s novel is set) which just welcomed a newly transferred member Stéphane (Damien Bonnard). Most of the first hour is spent on profiling the local communities with their diverse ethnic/religious makeup and on establishing the touchy dynamics between the police and the policed. Thematically and stylistically it’s nothing you haven’t seen before, but the depictions of the mundane, subtly volatile quotidian are anchored by Ly’s eye for authenticity. The grime, the noises, the bubbling hostility, everything feels palpably real and raw.

About an hour in, a theft happens at the circus which ultimately leads to a confrontation between the police unit and a group of riled-up adolescents. The conflict escalates when one of the kids gets seriously injured and the cops try to find and destroy the drone that caught the incident on tape.

The film features numerous extended action sequences and DP Julien Poupard dazzles with the fluency and immediacy of his camera work. The many overhead drone shots and close-quarter panoramic shots may come across as a bit too smooth/flamboyant for the scenarios, but the sheer vibrancy of the images is undeniable. The last setpiece, especially, which sees the raging youngsters declaring war on the police unit trapped in an apartment block, is so ferociously staged and filmed it captures the real-time horror of battlefields.

Not to be overshadowed by the technical bravura, the film’s final shot of two interlocking stares, one pleading, the other domineering, contemptuous, perhaps with a hint of waver, adds a dose of emotion and social-political symbolism that’s quite eloquent in its wordless indictment of a decades (centuries?)-old tragedy.

Booksmart: The Friendship Is Rock Solid and So Is the Buzz