Makeup artist Michelle Radow has worked on Showtime’s The Affair, SMILF and Dexter. Most recently, she has worked on HBO’s Sharp Objects, and this weekend, we’ll see her creating the female looks in Big Little Lies 2. I caught up with Radow for a deeper dive into the creation of the strong female characters of Sharp Objects, the dark and gritty drama starring Amy Adams and Patricia Clarkson. We also talked about working with her entire team of make-up artists, her creative process, how the bruised and bloody looks in the series’ violent scenes were achieved.

How did you approach the makeup for Sharp Objects?

My makeup approach is always breaking down the script(s), research for each character, makeup tests, and discussions with the actor(s) and director. Especially when something very makeup specific pops up in the script, I always ask for makeup tests and submit photos for approval to the director. Adrien Morot was the SP FX Makeup Department Head brought on by director, Jean-Marc Vallé. He was given the complex task of designing, fabricating, and applying Camille’s scars along with other special effects makeup throughout the series. Morot, Key SP FX makeup artist Mark Garbarino, and team did a fantastic job producing an impeccable makeup given all the daily challenges we faced. Kate Biscoe was Amy’s personal makeup artist. As a department we navigated weather elements like humidity, extreme heat, rain, remote locations, along with lighting challenges, and script revisions.

Patricia has red lipstick or a shade of it, what was the distinction between that and Amy’s color palette?

I wanted Patricia Clarkson’s character Adora to appear proper and flawless… that is until she begins to unravel. All the lip colors we selected were highly pigmented and luscious on purpose, even for her flashback scenes, Adora always looked “made up” and “done”, Two of the colors used: Elizabeth Arden’s Rose Petal and Revlon’s Cherries in the Snow, the color she wore on Calhoun Day in episode 5. I wanted her color palette to be feminine, but sharp. A lot of rich pinks, fuchsias, sharp lines, and very pale skin.

Kate Biscoe was Amy Adams’ personal makeup artist, Biscoe did a fantastic job of designing a contrasting makeup look to Adora. She used a cool color palette with blue/grey undertones and brilliantly crafted that leftover “day after” makeup look.

The revelation that Camille is a cutter was something to see, talk about the makeup process behind that and what, if any research did you do?

Adrien Morot was the SP FX Makeup Department Head brought on by director, Jean-Marc Vallé. He was solely in charge of designing, fabricating, and applying Camille’s scars along with other special effects makeup throughout the limited series. Kate Biscoe, Amy Adams personal makeup artist helped in the scar application process. Adrien did extensive research on the scars along with tests and discussions with director, Jean-Marc Vallé.

Amma was especially fun to design and bounce back and forth between her good girl/bad girl looks. When she was a good girl, we kept her very natural, smoothed out her skin so it was baby-like with no imperfections. No mascara, and kept her nails clean, neat, and short. When she turned into “Bad Amma” we would add mascara in a deep burgundy color, it gave an evilness to her eyes… smudge some subtle black around her lash line, and even add a little dark around her eyes for a sunken in look. It all helped play up a more mature/rebellious Amma. Key Makeup Artist, Erin Rosenmann was Amma’s makeup artist and looked after her every day on set.

There are plenty of blood and bruises throughout the series. What’s your makeup process there? It was a dream having Adrien and his talented FX team during the entire filming process. He sculpted prosthetics for us and helped with whatever I needed. Kate and I did several blood tests on camera before we started filming, we picked the tones that worked best and ordered 2 shades from Jaimie Kelman. We also used blood from European Body Art (EBA), and Bluebird. The bruises I created for Camille’s youngest sister, Marian were painted on with a combination of PPI gels and cream colors.

How many hours was the cutting revelation?

The scar application process was between 3-3.5 hours for Camille’s entire body applied by Adrien and team. Every time Amy worked, her double, Rebecca Bujko needed the same scars as well. Meaning Morot had 2 separate FX teams going at the same time. 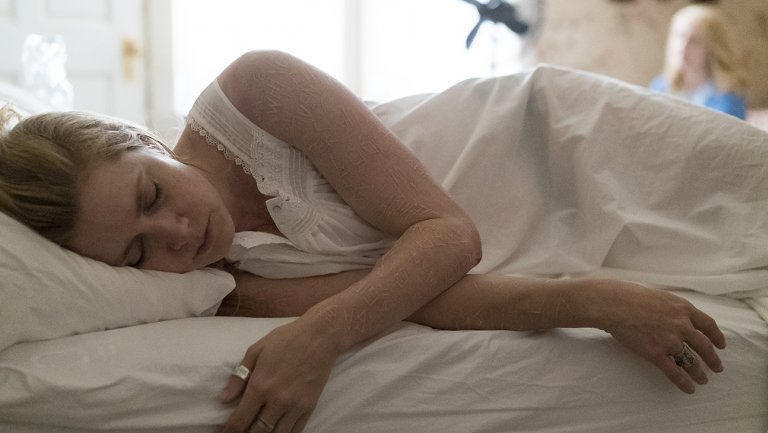 In BLL2, you have a great cast of women. What can you tell us about creating the looks of the women through makeup?

We had an amazing cast of women on BLL2! And I was extremely fortunate to have a makeup department of 10 artists, 8 of which were personal artists to the 6 leading ladies. Each artist worked with their actress to design and craft the right look for each character this season.