Jazz Tangcay Talks To Nick Murray Who Spills The Tea On ‘Trump: The Rusical’ and Directing RuPaul’s Drag Race

Nick Murray has been with RuPaul’s Drag Race since the beginning. He’s seen the show grow from Logo to VH1 and become the phenomenon that it is today.

We’re speaking the day after the finale has aired and Yvie Oddly has been crowned the Queen of Season 11.  For anyone who has been to a finale taping, the energy in the air, the love for the show is a mad adrenaline rush. It’s a ride. How do you bottle that up and relay that atmosphere to the audience viewing at home? Murray says, “The atmosphere is generated by the show and all of the cast and the queens.”

Murray takes us behind the scenes of filming the show and talks how the little engine that could, did and grew  into an engine with “twelve cylinders with quadruple turbo assist and fuel injection.”

I missed the taping this year, but being in the room during the tape of the finale is something to be experienced – the energy, the environment and the love. You capture that feeling of what it’s like to be in the room where it happens. How do you manage that?

The atmosphere is generated by the show and all of the cast and the queens. We are fortunate enough to have so many die-hard fans who come down to the theater, and just by putting on the show, we get that reaction. It is crazy. To see how the show has evolved over the past ten years and now it’s beyond huge.

It always was a very special kind of niche show when it first started out, but now it’s definitely mainstream. It really is a massive show across the board.

The Werq The World tour just finished in the U.K and played Wembley Arena with 8000 people turning up. It’s crazy. It’s just so fantastic for all the people, for Ru and for all these amazingly talented queens that we have on each season. 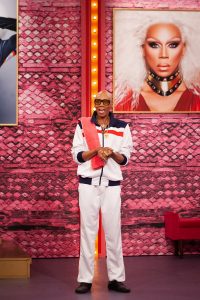 To work on it, I’m humbled and beyond proud. Every time I see an article online or in the papers, I smile and I’m so proud to be a part of this phenomenon that is RuPaul’s Drag Race. Little did I know that when I joined the show ten years ago, that I’d be winning an Emmy for directing it.

There isn’t. It’s a special kind of people that are on the bandwagon. It’s a special show. It’s about inclusion. It’s about acceptance. It’s about fun, expressing yourself and being yourself. It’s all those things that we talk about on every episode of the show. It’s really captured people. Everyone come and join this party. It’s like Michelle said and now that small engine has grown to twelve cylinders with quadruple turbo assist and fuel injection. It’s so marvelous to have witnessed the evolution over the past ten years.

Even the most obscure people will ask, “What do you do?” I’ll say, “I direct Drag Race.” He’s like, “What?!”Everywhere I go people have heard of the show and it puts a smile on their face. I get this tingly feeling.

There are so many great aspects to the show, and I do love seeing what the mini-challenge is going to be. Talk about directing Trump: The Rusical.

We do one of these big lip sync dance extravaganzas every season and this season was Trump: The Rusical. Hats off every year to the writers and the musicians that put these things together. It’s so funny, and the way it translates on to screen from paper is down to me, the writing and the camera team.

I’m part of the rehearsal, and I work with the producers and the choreographers on the staging and how people enter and exit the stage. It’s just thinking of innovative new ways of shooting it. It’s also watching the rehearsal and listening to the lyrics and knowing when to do a closeup shot or when I do a wide shot and what motivates the directorial decisions I make.

There’s a lot of time that goes on off-camera with the girls rehearsing to make sure that they are ready. We don’t do a dress rehearsal on the second day; we do more of a camera and lighting rehearsal. It’s pretty well rehearsed by the cast and I’ll go in and alter some of the positionings to make it more camera-friendly so we can translate their performance in the best possible way for the viewer.

What’s a typical week like for you when it comes to directing an episode? You’re not just dealing with the challenge; you’ve got the lip sync, the Werk Room aspects too.

We shoot more than one episode a week. One episode is shot over two days. I’m involved in the pre-production, phone calls and production meetings way before we start shooting. The challenges and the creatives are hammered out. Everything is tweaked and enhanced. It’s not re-written, but it goes through a process of where we really hone in on what we want from each performance, each mini-challenge or each lip sync. Everything is constantly updated and honed down to what you actually see on the screen.

I play a part in all of that aside from the writing. I play a part in the set design, the way we light it and the way I shoot it. We shoot an episode every two days. It really is hats off to the queens who are in the show because we tell them very little about the challenges. It’s their uniqueness, nerve and talent that is what you see. They’re told, “You’ll be doing this performance. You need to learn this choreography by tomorrow.” Or they’re told, “You have to learn these lines and really get into the acting challenge by tomorrow.” Sometimes the acting challenges are revealed after the mini-challenge. They get the script and have to learn that whole thing in a few hours. They also have to get into drag or costume and that’s the end of day one. It’s really just a testament to these outstanding people that we have on the show.

After we’ve shot one episode, we do it all again. I’m constantly in awe every season by how hard the queens work, but also from a production point of view, we try to better ourselves. I try to create a new way of shooting. The lighting team does the same. The producers come up with these amazing challenges and we just try to one-up ourselves every single year. I don’t know how we do it, but it’s a testament to the amazing drive and talent that is behind the show, as well as those that you see on the show.

Day one – is “Hello.” Ru walks in and explains the mini challenge. One of my favorite mini challenges was the Love Connie and they were told to get into Quick Drag. They dressed up in their Jane Fonda outfits, and they shot those scenes. We had a quick meeting with Connie, and I gave him the staging notes about where I’d like him to do the performance and how I was going to shoot it. I haven’t laughed so much in shooting a mini challenge in a long time, and when Love Connie arrived, we didn’t know what she was going to do. The whole production booth was just in hysterics, and it was one of the funniest things I’ve ever shot. We shot for much longer than you saw on TV and there were just so many gems that didn’t make it into the cut. We died laughing. It was comic genius and the performances were outrageously good.

We need a director’s cut of that.

[laughs] It was really special. What makes me really smile is seeing Ru have a good time. He was laughing so hard, he could barely stand up.

I love when you cut to Ru’s reactions and Ru is keeling over.

They are gems. Ru is so obviously invested in the show. When Ru is laughing, it makes everyone else laugh and it elevates everyone. Seeing Ru laugh is really special because that laugh is really infectious. When Ru is in man drag, we did the Jersey Justice and Ru was dressed as a reporter. Again, we died laughing.

The lip syncs are wild and were just so great this season. The “Sorry Not Sorry” lip sync was just – I still don’t have words.

You always anticipate the lip sync. This was particularly interesting because these two ended up in the finale as the top two. It was quite interesting because there was this big air of anticipation. The queens are giving the songs to rehearse. Knowing the lyrics is paramount. Before Ru says the line, “And don’t fuck it up,” we run a sound check and make sure Ru is happy with the level of playback. I cue the track, and that’s when it’s on. Everyone in the control room is on their feet and watching the big screen. Usually, I have 8 cameras shooting the lip sync.

Everyone’s mouths were on the floor for this one. It’s rare that you get two queens that are so great going up against each other. We were all blown away by these two performances and that’s why that decision was made.

What is so apparent is the passion everyone has for the show.

We do. These people are incredible. What Ru and everyone has done. I’m fortunate to shoot them in a way that makes them adored by everyone around the world. It’s about capturing those special moments from the fun moments to the sad moments. It’s about lifting them up. Some of them have been through trauma, and we are very sensitive in the way we tell that. We always make room and spend extra time nurturing them. We want to see them do well to make sure the best of them come out. We take big wide arms and embrace all aspects of their characters. The show has lots of heart, it’s not all about the laughs and there is a sensitive side to the show. It’s important that we’re able to give them the little lift that they need or to tell somebody’s story that gives other people who watch the show that “can do” attitude. I’m proud to be a part of something that is so relevant. We don’t aim to politicize certain things, but at times we can’t avoid it. It’s a global phenomenon that we’ve created and this wonderful thing that is RuPaul’s Drag Race.