Jazz Tangcay talks to Donna Zakowska about the Parisian looks for The Marvelous Mrs. Maisel

Costume designer Donna Zakowska is already back to work on Season three of The Marvelous Mrs. Maisel but she still has plenty of time to gush over the looks from season two, especially as her dream of going to Paris for the show came true.

Having gone to school in Paris, Zakowska joked with the crew that it would be a dream to take Mrs. Maisel Paris, and it happened. We talk about Zakowska’s influences and color palette as well as how she injected Midge’s humor into the costumes seen on the show.

Zakowska also discusses pacing and creating the costumes for a TV show and how her previous work had prepared her for The Marvelous Mrs. Maisel.

What was your first reaction when you read Midge was going to Paris?

I actually knew about Paris before I saw the script. In fact, it was something I kept saying to them when we were joking and saying that we were going to the Catskills. I said, ‘Can we go to Paris?’ I put it in the universe, so when they called me and said we were going to Paris, I couldn’t have imagined anything better.

I love Paris. I went to school there, and it was a dream come true to be there, working in Paris.

Where do you begin with her color palette going to Paris?

Having lived there and have been to school there, I had a certain instinctual sense. In terms of Marin (“Rose”) and that purple coat, it’s such a characteristic Parisian color. In terms of Midge, the outfit that she walks through the streets with had a French impressionistic take to it. I think all of those things—my idea of Paris, the idea of French color in painting and in popular culture—all became a part of the choices that I made for both Marin (Hinkle) and Rachel (Brosnahan).

Did you go looking through old issues of French Vogue and the women of that time? What was your process?

Most definitely. I am fanatical when it comes to that. We had books of research that I made from books on France and the period. I absolutely had French Vogue from 1957 to 1959. I use that for everything, even when I’m doing New York. I went massively into the source material. I looked at major French photographers of the period. I always create massive research books for everything I do. I’ll go to the original source and then from there, I’ll launch into what I want to do with color.

I absolutely loved her outfit for the flight with the gloves and the hat. It was so perfect and classy.

There’s always a little bit of humor. Midge has a certain type of personality that always presents itself in her clothing. It’s a little bit presentational. In the script, she had supposedly never traveled on a plane and in the 50s that was common. Now, we just jump on a plane. People didn’t do it that much back then. So, the idea for the look was a stewardess meets Midge. The idea of the little hat with the tassels hanging was a stewardess gone wild, in a Midge palette. The idea of the matching pieces — we made the gloves and the hat — that was my idea and sort of her idea of how you travel in 1958/59. There was a bit of humor mixed with fashion.

It’s so funny you say that, back then, people dressed so stylishly for flights and now, it’s just sloppy looks.

Yes, people are so concerned about comfort and the look becomes secondary. That’s a very big difference.

When they are in Paris. How did you change Abe’s look?

He starts out as Abe, the college professor as we know him. He becomes seduced. As we indicate, it has to do a little bit with his past – the French, Bohemian, intellectual culture of guys sitting around in cafes and discussing things. So, the whole idea of the beret, scarf and leather jacket–the jacket was an old military jacket, which they probably bought at the flea market–it really was his journey into French intellectual life and trying to spice up the college professor. In both cases for Marin and Abe, it was a little flash from their past, it was things they had in their past, so it was easy for them to adapt to being in Paris and creating this whole new image for themselves.

It was fun for me because I loved costuming the guys who were at the table with him. All different versions of that. The 50s was a period of intellectual, cultural and art advancement in France and that’s why it was beginning to permeate in New York.

Let’s jump to the telethon. How many outfits were done there?

All the specialty clothes. I looked at source research and found photos of people at a telethon. There was one with an animal costume, like the use of the puppet. That was based on a friend of mine who was actually a puppeteer. It was a cross between entertainment and comedy because there was such a wide range of people who were on these telethons. I started designing on the Big Apple Circus, so it was fun to design the clowns again. I went back to my circus and theatrical history.

When you’re designing for TV, what’s your timeframe?

I have very little time. It’s not like in movies where you have a script from the very beginning, and you know the whole arc and the picture of what you’re doing. I may have some idea in advance with the outline and where we’re going, but we’re pretty much under the gun the entire time. Always just getting it done. I’m doing a lot of building and designing. I hadn’t done that much episodic things, but I had done TURN: Washington’s Spies which was 18th century periodic, and that prepared me for how to manage the time. You’re always in a race, and it never ends. It’s pretty tricky to get to all the details that I like having.

It’s always fun to do, but we never have enough time, but we seem to make it work. The magic.

I love her dress when she’s boating in the Catskills. It was such a picture-esque moment.

That Midge dress and particularly Marin’s dress in the Catskills were influenced by Claire McCardell who was an American designer of the period, where it was beginning to be elegant-casual. It was the first time we were seeing those clothes and, in a way, it was a pre-cursor to Calvin Klein. We built that out of vintage fabric. I had this sunbonnet which was hand painted with sunflowers and butterflies. It was the ultimate whimsy and a good counter-image to sitting in the boat with that guy. I wanted her to seem frivolous and romantic. Again, there’s that little bit of humor that you want to put into the elegance. There’s a little bit of humor that is tied with the visual beauty of it.

Talk about the way you used blacks this season.

It came from Amy Sherman-Palladino, and it was quite influenced by the Joan Rivers idea with the pearls. What we wanted to do, when she performs, was to have her in a uniform for at least 85% of the time. The black comes from the fact that her whole world began Downtown. Black is something that I don’t use on many people unless it’s a beatnik in Downtown Manhattan. It’s a little connection with the Downtown world, evening, and the idea that this is a housewife in her most elegant stage. But also, it came from the idea that Amy wanted to see Midge on stage in a black dress with pearls. That’s how we decided on that.

What’s the collaboration with the other creatives such as production design?

On this project, our production designer jokes about it, but we rarely have meetings. Color is something that is subjective and instinctual, and by some strange chance, we continually keep hitting the same place. He laughs and jokes about it saying it’s so perfectly matched. I think it’s more of an artistic harmony and it works. It’s exceptional because that doesn’t usually happen. [laughs]. 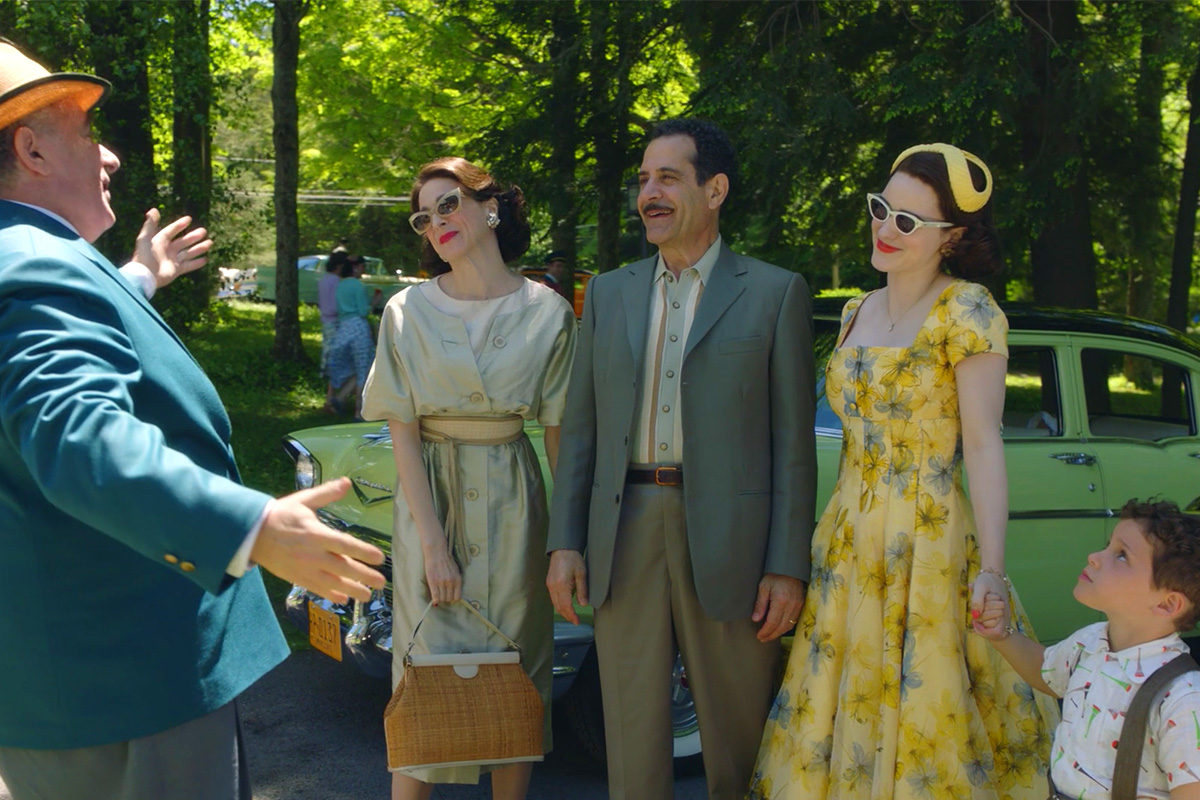 Joe Guidry - From the Baseball Pitch with Michael Jordan to the Scorching Heat of 'The Challenge: War of the Worlds'