Terry Dresbach On Creating The Look of ‘Outlander’

Terry Dresbach On Creating The Look of Outlander

For over four years, costume designer Terry Dresbach has created the costumes for the cast of Outlander. Time-travel, continents and centuries meant Dresbach was always planning ahead. It also meant she had to be a huge fan of the books to know where her next world was going to be.

Outlander without a doubt is one of the most visually beautiful shows to watch, from the cast, to the Highlands of Scotland, to Paris. Outlander covers it all. Dresbach’s costumes are made from scratch, everyone, every stitch.

I caught up with her to reflect on her work this season and how she mastered the challenge of creating the costumes for Outlander.

For the visuals, where does the vision begin? Does it begin with the book or the script?

Going all the way back, I brought the book to my husband. I had read them a dozen times over the years. I tried talking him into making a movie, and he said that it was not a movie, but a TV show.

Then, his partner was also a book fan and we convinced him to do it. When it came time to do it, there were no scripts. We had to do which is what we always do on a show that’s as vast as this, we learned we couldn’t rent anything so we’d have to do every stitch. What that meant was that we’d have to create a world with pretty much nothing to go on but my knowledge of the story and history.

There was a lot of running around over the seven weeks in which we had to set everything up. We were pretty much working on the next season while we were shooting the one before. It was long before the writers were sitting down and figuring out what the story was.

I’d be like, “OK, in two, we go to Paris.” There was a lot of creating worlds and knowing that your main characters would always be with you. You’d create closets for them. When the scripts came in, you’d create specifics of that script. It was an interesting way to do it.

I think it’s almost impossible for someone to do it that way if they hadn’t read all the books many times.

I saw some of the costumes recently on display and the design, every inch is incredible to look at, and that material – how did you source it all, especially when you’re working almost a season ahead?

We’re still wearing wools and linen. You make sure you stick with natural fabrics because what they didn’t have then was polyester. They didn’t have man-made fabrics. We stayed in the natural world. There was cotton in America, a little bit, but not in Europe so much. You have to do your research on what your fabrics are and make sure you’re sticking to what is of that place. On Outlander, it’s all over the place. You’re also doing 20th Century- lest we forget, it’s a show about time travel.

You have to do an incredible amount of research on what are the crafts and beyond craft, the fabrications. So, when you go to Paris, you look to find things that are what 18th Century fabric would have been. Unless you’re going to buy Dior, they stopped making that. So, we taught ourselves how to embroider 18th Century fabric. We ended up with about five or six rather elaborate embroidery machines. The kind they use to make baseballs shirts. You program into the computer your design, and it’s this whole process that the team taught themselves how to do.

When you start doing that thing, it opens the door to that you can do that. Then, you look at handpainted fabrics. So by season four, we can’t find a button, so we make the button. Oh, we can’t find hats. So, we make hats. We made absolutely everything. 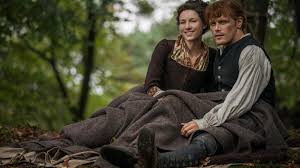 It’s a huge operation. It’s like a factory. You get to America, and you get to the Cherokee and the Mohawk. You start your research process over. You realize how similar it was working with the Native people of the Americas to working with the Scottish. A lot of the history and research had been wiped out. So, we did the same thing. My team who had the knowledge by then to do anything, learned how to do crow work. That’s the detail you saw. They embroidered with a porcupine quill. It’s every bit as intricate as the Parisian embroidery. The team learned how to do that. They learned how to do weaving. They learned how to recreate the clothing of that period of a very specific people. It was remarkable.

You had young Scottish women, and it was the first show they had ever worked on. They had gone from creating 18th Century Parisian embroidery to 18th Century Mohawk porcupine quill embroidery. It’s extraordinary.

I can’t even imagine. You see it on TV, the fine detail, but then you learn about the artistry behind putting those costumes together.

It’s so interesting. We hadn’t seen the Mohawk and Cherokee before. I understand why people play it pretty close when they work with these cultures because there’s not a lot of information and it’s so intricate and complicated. But we set up a team big enough to do everything with France, we were able to transfer the skills. Our goal was to showcase that culture in the same way we had showcased the European culture.

Let’s just talk about Claire’s evolution in costume design. What was the key to her?

Cat and I worked pretty closely on that in the beginning. One of the things we shared, this is a show about time-travel. If you’re tossed into another time, do you completely lose yourself? Probably not? You’re still the same person. You’ll gravitate to things that feel familiar and comfortable. We did the same thing with Brianna. Her silhouette is very 70s.

We did that with Claire. We wanted to make sure she still moved like a woman of the 20th Century. There was always something very stranger in a strange land about her. We carried that through thematically.

We wanted her to walk like a modern woman. When we got to Paris, we brought in all the new look fashions of Dior. She would carry that feel with her. When we get to America, it’s the first time she was free. She gets to be who she is without being found out. She gets to express herself because she’s out there in the middle of nowhere. We wanted to express that freedom of movement for her. This has been steps. She’s learning along the way, about the time you’re living in and how to assimilate in with the culture you’re living in, but you hold on to yourself. It just seemed like that’s what any normal human being would do.

If I moved to China tomorrow, I’m probably not going to change how I dress that much. None of us would.

It’s true. I moved from London to LA; I didn’t change massively.

I loved what you did with the men and the textures.

It was important to us. We discovered that people kept their clothes for decades. There was no Target. They really cared and patched and took things apart and put them back together. TV doesn’t do that. People living in the middle of nowhere, they get their clothes dropped in. Who knows? We wanted to shake things up.

So we had Jamie with that suit that he got in Paris in season two, and he wore it all the way through to season four. He repaired it and mended it. It’s the only show you wear your clothes for four seasons. To watch that change – it doesn’t stay exactly the same. To be able to adjust to climate is something people do. If I moved to London, I’d bring more coats.

Guess what? I have 80 million scarves after living in Scotland for six years. I came back and thought, what would I do with all those scarves.

You will be missed on Outlander.

Thank you to the fans. God bless them. They are incredible. I’d have flowers in my office if I said I was sick. They are just the best.