Is Bill Hader On His Way to Another Win at the 2019 Emmys?

Jalal Haddad takes a closer look at this year’s contenders for Outstanding Lead Actor in a Comedy Series at the 2019 Emmys. Is Bill Hader the frontrunner for a second year in a row? Which new performances are likely to stand out?

The 2019 Outstanding Lead Actor in a Comedy Series category is an interesting contrast to its female counterpart. While its female counterpart is incredibly competitive with some of the biggest comedies of the year, the lead actor race doesn’t seem to have as much correlation with Outstanding Comedy Series. Last year’s winner, Bill Hader, is an early front runner. The comedies behind Michael Douglas and Anthony Anderson are in the conversation but beyond that…

Instead, there seems to be a handful of well-regarded actors being singled out for their long careers in Hollywood in shows that don’t seem to be getting much attention anywhere else. Past nominees like Jim Parsons, John Goodman, Don Cheadle, and Ricky Gervais are back in the conversation while comedy legends like Jim Carrey and Sacha Baron Cohen are on the verge of their first nominations.

As the race continues it will be interesting to see if anyone has the momentum to go head-to-head with Hader. Barry seems to only be getting more and more popular, but as the Television Academy grows, they’ve proven that they aren’t the same voting group that awards the same people year after year. The only question is who exactly would that be?

Last year Bill Hader won the first acting Emmy of his career for his role in Barry as a deeply troubled ex-Marine turned hitman attempting to become a better person and channel that pain into acting. Just finishing up its second season, Barry has proven that the success of the first season was no fluke. Audiences and critics raved week after week, raising the question if the show itself might even be a dark horse to win the top award of the night.

The success of Barry is in large part because of the creative risks taken by Hader not only as an actor but as a writer, director, and producer. This season he and co-collaborator Alec Berg crafted one of the most celebrated episodes of the year with “Ronny/Lilly” – a stunt-filled half hour where Barry fights an insane father-daughter duo trained in taekwondo. It’s an episode that solidified his front runner status, but will there be a pushback to a performance and season that leaned even further into a character’s dark psyche with few actual laughs? As of now, he is the clear frontrunner, but there is room for a broader comedic performance to win over voters.

Surprisingly Hader’s biggest competition centers around the world of actors struggling in Hollywood. Michael Douglas stars in The Kominsky Method as an aging actor turned acting coach in a sort of male counterpart to Grace & Frankie. The Oscar winner has already won a Golden Globe award and a SAG nomination for his performance, and an Emmy could easily be on the way especially since a large portion of the actors branch will be able to relate to the show’s specificity regarding aging in Hollywood.

It doesn’t hurt that The Kominsky Method is the newest project from producer Chuck Lorre. The celebrated television creator is responsible for a lot of recent Emmy wins including Allison Janney, Jon Cryer, Jim Parsons, and Melissa McCarthy. His first show with Netflix has been met with great reviews celebrating it as his most tonally unique project to date. It also feels deeply personal and that has the power to speak to Emmy voters. The only question is whether or not voters are actually excited about the show or if it just seems like obvious Emmy bait. Or does that even matter when they have the opportunity to vote for someone like Michael Douglas?

The Newest Auteur In The Conversation

From Larry David to Pamela Adlon to Aziz Ansari to Donald Glover there is no sub-genre that the Television Academy loves more than auteur comedy. The actors branch loves to celebrate singular voices that also write, direct, and produce their own projects. Shows that naturally come across as personal works of art. This year the newest addition to the genre is Ramy Youssef of Hulu’s Ramy.

Portraying a fictionalized version of himself Ramy navigates life as a first-generation Muslim in America trying to balance Millennial life in a Western while also trying to understand what his own faith means to him. Ramy opens in a Mosque and as far as I know is the first American show to do so. From there the show explores everything from dating to Ramadan to what it was like to grow up pre and post 9/11. Because these stories haven’t really been told on television before the show feels incredibly refreshing and new even if many of themes like dating and religion are familiar.

On top of all that Ramy stands out because it’s just that good. Youssef and the show itself has the potential to be the comedy discovery of the year. Outside of the stand-up comedy world he still isn’t a well-known name, but Hulu has done an incredible job helping the show find an audience and there seems to be a newfound excitement for Ramy. Is he being underestimated in the lead actor race?

Showtime – The Network to Beat

This year no network has as many strong contenders in the lead actor race as Showtime. For the past five years, William H. Macy has become the most consistent name in the race as the alcoholic patriarch on Shameless. This year the premium network has a handful of Oscar winners and beloved actors with new shows in contention with Don Cheadle, Jim Carrey, and Sacha Baron Cohen. The biggest question remains though, will William H. Macy continue to be nominated or will the college admissions scandal that his wife is caught in the middle of scare voters away?

The network’s best chance at a nomination this year is probably with Don Cheadle. Voters have singled him out four times in the past for another Showtime comedy, House of Lies, and this year the Oscar nominee is back with his newest project Black Monday. The 80s Wall Street comedy is flashy enough to attract voters and as more and more fans discover the show the beloved actor is sure to stand out. 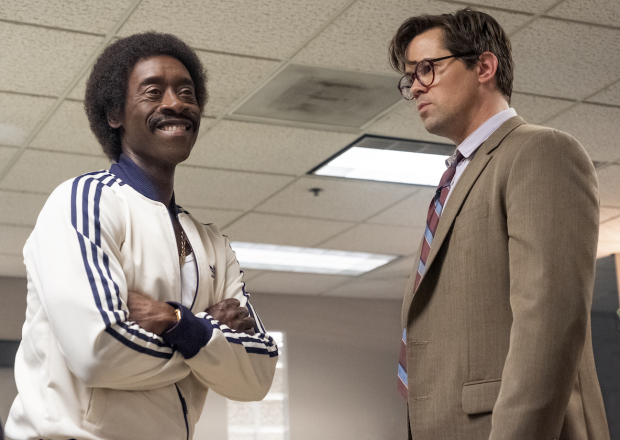 Jim Carrey has finally found a challenging role worthy of his talents in Showtime’s Kidding as a Mr. Rogers-esque cultural figure battling grief. The critically acclaimed dramedy also serves as a reunion with Eternal Sunshine director Michel Gondry. In the best way, possible Kidding is an incredibly weird and complicated show but will that be too off-putting to Emmy voters who tend to gravitate towards the same broad comedy year after year? Working in Carrey’s favor is the goodwill he’s earned over the years as one of the funniest modern comedic actors.

Sacha Baron Cohen has made a career out of bringing his sketch comedy across America and this year he is back in the Emmy conversation with the Showtime sketch variety series Who Is America?. Earlier this year he received a Golden Globe nomination for his characters that poke fun out of our absurd political situation from a far-right conspiracy theorist to a gender studies Reed professor. In the past, his Emmy nominations have been for writing and producing so it will be interesting to see if this is the year the acting branch finally nominates him.

Broadcast comedies have been losing favor at the Emmys in recent years with only two nominees in last year’s lead actor competition with Ted Danson and Anthony Anderson. This year there are a few high-profile names in competition but it’s hard to tell whether or not name recognition is a major factor or if voters are still watching these comedies.

After a major push from passionate fans and critics groups, Ted Danson became the first major nomination for NBC’s The Good Place – in large part because the 16-time nominee is one of the most nominated actors in recent history. Throughout the third season, Ted Danson’s Michael traveled to earth, battled demons, and tried to find the humanity in himself in what might be his best season to date. The cult comedy is clearly on the radar of Emmy voters now and is fresh off of plenty of guild and Golden Globe nominations hinting at Danson’s likely return.

With four Emmys Jim Parsons (The Big Bang Theory) is tied for the most wins in the category alongside legends like Michael J. Fox, Kelsey Grammer, and Carroll O’Connor. So now that the sitcom is in its final season he should be an easy prediction. But five years ago Emmy voters took a sharp turn from awarding him year after year to suddenly abandoning the show altogether. Fans of the geek comedy are hoping that the television academy nominates Parsons one last time and there is a good chance they will but in recent years they’ve shown that once they’ve moved on they really mean it.

Keeping an Eye On

Beyond Michael Douglas, Netflix has a couple of high-profile names that in any other year would be an easy sell to Emmy voters. Idris Elba is a five-time Emmy nominee and one of the most lusted after actors in Hollywood. The second Netflix announced his new comedy, Turn Up Charlie, he became an immediate contender. Unfortunately, the premise wasn’t enough and critics panned the comedy about a DJ turned nanny. Ricky Gervais is 23-time Emmy nominee and has repeatedly been singled out by the actors branch for surprising shows. This year he released his newest project, After Life, a dark comedy about a cynical man coming to terms with his wife’s death. After Life struggled to attract attention from larger audiences but fans of Gervais were immediately won over. Can either British actor sneak into the Emmy race even if neither of their shows seems to be picking up steam in other categories?

The actor that deserves to be more at the forefront of the lead actor race is Drew Tarver. The Other Two is the breakout comedy of 2019, and a large part of the show’s success can be attributed to Tarver’s performance. His scenes that have helped the show go viral including a perfect Call Me By Your Name parody and one of the most relatable bottoming conversations on television. Even though comedies on smaller networks don’t receive the same amount of attention from Emmy voters, Comedy Central has gone all out on giving The Other Two a full campaign giving Tarver and the show an outside chance of receiving the nominations they deserve.

After five seasons as the most underrated show on television Schitt’s Creek seems to finally be having a moment. Critics have championed the show, new audiences have caught up with past seasons on Netflix, and the cast has been selling out panel events across the country. This could be the year that Emmy voters finally start paying attention. Nine-time Emmy nominee Eugene Levy may not be the one that gets the most attention for his performance as the Rose patriarch but he’s also the biggest name and eligible in the least competitive category, similar to Danson sneaking into the race last year.

Where The Race Stands

Dava Whisenant On Bathtubs Over Broadway