Emmy nomination morning brought an overwhelming number of nominations for the cast of When They See Us – an ensemble filled with Emmy friendly names. The biggest surprise however came in the supporting actor race where Asante Blackk, in his debut screen performance, earned the first Emmy nomination of his career. As  one of the Exonerated Five, Blackk portrays Kevin Richardson. Nominated for Outstanding Supporting Actor in a Limited Series or TV Movie, Blackk is the youngest nominee of the year.

Last week Asante Blackk took the time to speak with Awards Daily TV on what it was like to be nominated for his first Emmy, how proud he is of the record breaking series and the global impact its having, and the words of advice he received from his Emmy-winning aunt Samira Wiley.

What was it like nomination morning to find out that you were nominated for your first Emmy and the show as a whole was nominated for 16 awards?

It was completely insane. The night before, I knew the Emmy nominations were coming out but I did not really expect anything for myself at all. I had high hopes for the series to get nominated as well as for Jharrel [Jerrome] and I was just ready to be super happy for them. Then I wake up the next morning and the first text I got was from Ava DuVernay herself congratulating me on my nomination. I was super, super confused and then I started being tagged in all of these social media posts and articles. I was at my aunt’s house and ran out of my room in a daze from being asleep and was like “I think I just got nominated for an Emmy?” She gave me the biggest hug and we ran around the house for an hour celebrating. It was this crazy, surreal moment.

Going back to the beginning how familiar were you with the story of Kevin Richardson and the Exonerated Five?

Not at all. The first time that I really heard about it was during the audition process. My agent, because he lived in New York at the time, told me to do as much research as possible. He wanted me to be able to see how the media portrayed these boys who are now men and how the case was set up against them from the start. I did a lot of research and tried to find news clips and things like that online and I also watched the Ken Burns documentary, The Central Park Five. I was just shocked, you know, I was shocked to see how the police and the DA’s office tried to pull this lie together against these men from literally nothing simply because they were in the park that evening. I was sick to my stomach but I was glad to see that the truth was finally being told, especially by Ava. I’ve been familiar with her work before I knew she could do their story justice.

Speaking of Ava DuVernay how did she prepare you for such an intense project especially since this was your first role in television?

I remember before I had even gotten the part we were in a director session and we sat down and talked. She guided me through screen work and the differences between screen and the stage, especially the focus that was required. In terms of this project because of the seriousness of this story and what we are trying to do for these men it requires a different kind of focus and work ethic in order to give these men the justice they didn’t get 30 years ago. So there was definitely a little pressure, in the beginning, having such a heavy and important topic but overall, I think it was settled by the fact that everyone on set was a family. We’re all very comfortable with each other, especially the five of us that played the exonerated five. They’re my brothers now.

There was never a moment, even in the toughest scenes where I didn’t feel completely comfortable on set.

What kind of communication did you have with Kevin Richardson throughout the process of filming? Was there anything about him that you wanted to bring into your performance?

My first meeting with Kevin was after our table read. He didn’t actually attend the table read, he was at Disneyland with his family. Afterward, he met with me and Kyle Bunbury [Angie Richardson, Kevin’s older sister] and surprisingly we didn’t really talk much about the subject matter itself, we kind of just talked as if we had known each other our entire lives.

He is very sweet, very kind, and overall just an amazing person to be around. he’s cracking jokes making us laugh. I got this sense of sweetness from him that I wanted to make sure I put into the performance because it captured his essence. I thought if he is this lovable, laughing person after everything that he had been through imagine how innocent and a good person he was at 14. That was what I tried so hard to put into my performance.

For so much of the story these five young men are completely isolated from one another which made the scene where we finally see them mostly united in the holding room even more powerful. What was filming that scene like? I can only imagine the bond you must have with your four costars.

It was so rare to see all five of us together. Even in that scene we were incomplete because we were missing Jharrel. It felt like a family reunion when we were all together and just happy to see each other. When it came to making our way through the scene there was nothing but respect for each other and it made it so much easier.

I walked away from that holding room scene in awe because as actors we all made room for each other. It never became someone’s scene and we allowed each other to shine. Being as a group made us better performers.

One of the most extraordinary things to see after the release of When They See Us was the astoundingly supportive response on an international level. What was your reaction to this enormous immediate inpouring of support? 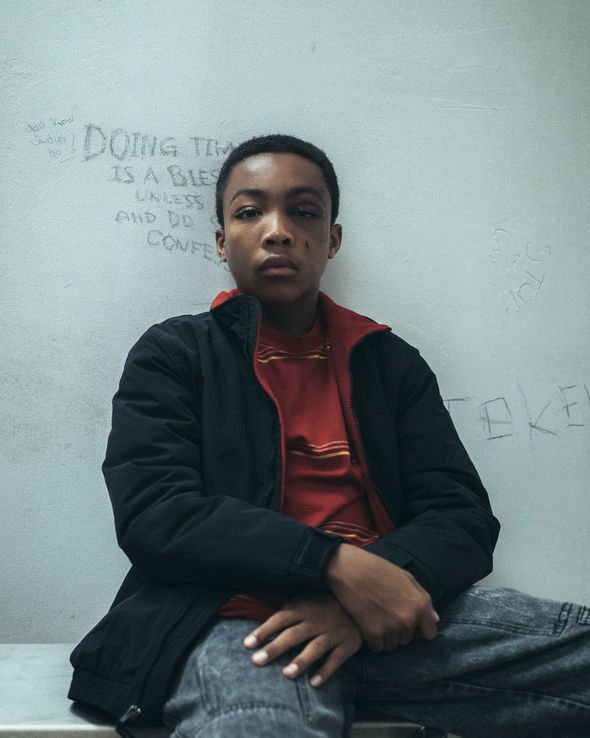 The reaction has been nothing but love. It’s really been a very humbling experience. To have something that I helped create and something that I had the privilege to be a part of really impact people and spark change on a different level that I’ve never seen with any other work of art. I love acting and it’s something I wouldn’t trade for the world and it’s really something different when you’re able to tell stories that get people’s gears turnings, that gets audiences to feel things, and gets them to see through a different perspective. Then the work that you have the privilege of doing has the impact of changing lives. I’ve had people come up to me on the street and want to embrace me in these deep long hugs because all they see is young Kevin. It’s heartwarming to see how this story has touched these people and influenced them to demand change and fight for what’s right.

Is there a specific scene or moment from the series that has particularly stuck with you?

The scene that I think Ava wrote so beautifully and was pieced together so beautifully by the editors was when Kevin is piecing this lie together that the detective is feeding to him. That was a tough scene to shoot because it’s hard to act like you’re acting. It was so heartbreaking because as an audience member you knew what was happening but couldn’t do anything to stop it. Like the lie about the blouse. You knew someone wasn’t wearing a blouse while jogging in the summer and it really showed how this lie came from nowhere and they had no idea what they were talking about and these lies were fed to them. It baffles me that this wasn’t more apparent when it happened in 1989. It’s so clear and easy to see on-screen how they were coerced and forced into a confession.

Another scene that sticks out to me actually didn’t make it into the final cut. As the verdicts are being read out Kevin’s mom had a stroke. That will always stick with me forever. I remember that day of shooting being stuck in the emotion thinking of a 14-year-old Kevin seeing his mom have a stroke as he is being dragged away to prison and having no idea what was happening. The fact that this happened to a man that I consider my brother really stuck with me.

One of the big stories coming out of your first nomination was the fact that you have a very famous Emmy winning aunt, Samira Wiley. Has she given you any advice for the big night?

She told me to stay humble. She told me I already won for being nominated for my first ever project so whatever happens I already won. That I should live in the moment and be proud of myself. I tend to diminish my accomplishments and try to move on to the next thing but she urges me to focus on the now – to bask in it and be proud of what I accomplished. It’s just the biggest blessing to be in the space that I’m in right now.