Will HBO and ‘Game of Thrones’ Win All the Emmys?

I’m going to start this article by going on the mother of all (dragons) tangents. Forgive the rant.

The idea for this piece came from a recently received monthly issue of Entertainment Weekly. I use monthly written as such because I cannot express how deeply upset I am at how this magazine has deteriorated over the past year. I’ve subscribed to Entertainment Weekly since 1990. Literally over half my life. I’ve seen it dive deep into film. I’ve seen it deeply dive into ephemeral pop nothingness. This year, I’ve seen it drop its publication schedule to roughly ever two weeks, causing Joey Moser and I to give it the nickname Entertainment EveryOtherWeekly.

Now, the hard copy publication has been reduced to a monthly publication. Like Premiere before it. And like Premiere before it, I suspect the end of its print edition is a year or so away. And I know, all of their content is now available at EW.com. Forgive me while I bemoan the turning of the clock. This old man needs to yell at clouds for a while.

Thanks for your time.

The latest issue of Entertainment “Weekly” drops its official Emmy predictions. The predictions are spread over several pages with the first page dedicated to Drama Series. They (correctly? inevitably? rightly?) predicted HBO’s Game of Thrones to take the Drama Series crown. And that’s right, isn’t it? Sure the final season became one of the (if not THE) most divisive seasons of television in history, but no one really thought the Television Academy would send away this record-breaking series without a strong goodbye hug? When the nominations were revealed in mid-July, we found out that not only did the Television Academy give Game a goodbye hug, but it also slipped it the tongue, stuck a finger *thismuch* up the butt, and left some money on the dresser. A whopping 32 nominations, 33 if you count the documentary The Last Watch which most observers do not.

So, predicting Game of Thrones to win Drama Series is really a no-brainer. There’s no single series that everyone else can rally around. The competition all has their fans, of course, but there’s obviously a huge voting block of Game fans that will send it home with the top trophy while everyone else splits their votes. Plus, there are always voters who will just name-check the series wherever they can whether they watched it or not. And maybe that’s why the awards gurus over at Entertainment “Weekly” did this: 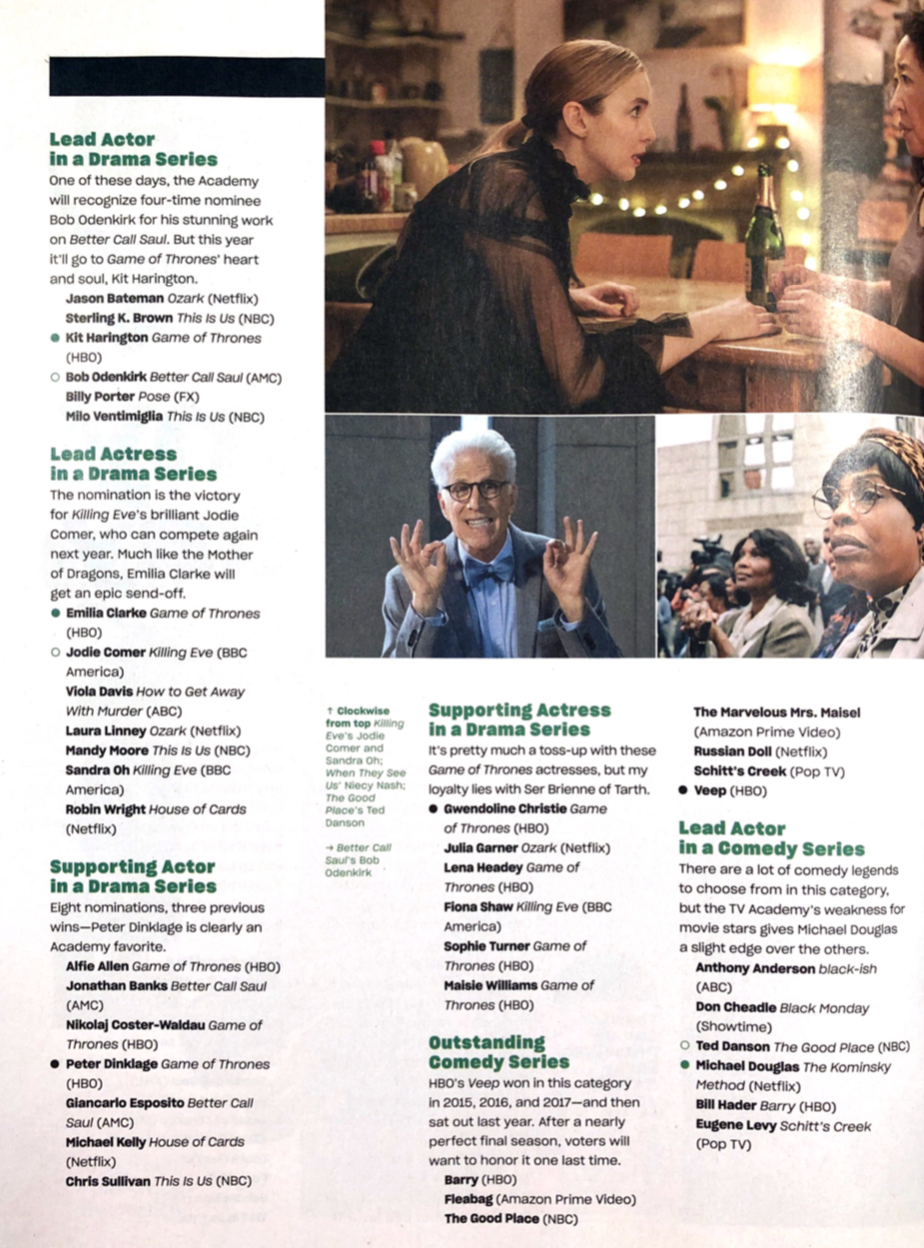 Let’s break this down.

Peter Dinklage will most certainly win his fourth Emmy Award for his fantastic Season 8 supporting performance. He will, in my opinion, rise above his two competitors Alfie Allen and Nikolaj Coster-Waldau whose nominations feel like wins for the two actors. And Dinklage deserves to win. He’s perhaps the most important, consistent and well defined character on the series. If anyone else wins, then it’s surely to be a left-field selection like Chris Sullivan from This Is Us. But Dinklage will take it home. E”W” has this right.

In Supporting Actress, they’re going with Gwendoline Christie, and it’s a very nice thought. Christie, a talented and beautiful actress, is an incredibly nice person. She’s full of joy and life. Predicting her to win, though, feels like someone not-so-objectively looking at the race and letting their love for her overrule common sense. Here’s a case where, I suspect, votes will be split between the major Game contenders for this race: Headey, Williams, and Christie. My thought is that Julia Garner takes it home for Ozark. I mean, Ozark has to win something right? She’s very buzzed about right now, and she did get that very surprise Lead Actress nomination back at this year’s SAG awards. So, I don’t think they’ve got this one quite right.

But here’s where the crazy starts.

Predicting Emilia Clarke to win over far more deserving actresses is akin to burning up King’s Landing after you’ve won the battle. It makes no narrative sense. Sure, I think Emilia Clarke is super cute. She’s been a strong presence through the entire series, and I have usually liked her performances. I’ll even defend her Season 8 moments save that one “I’m about to snap” moment atop the dragon which didn’t work at all and was an obvious candidate of green screen acting. But if Natalie Portman can rise above that, then surely Emilia Clarke can. But to say she’s going to win Drama Actress over Sandra Oh (who lost last year) or Jodie Comer or even Robin Wright is either pure insanity or 100% awards cynicism. More on that later. My prediction ties into Emmy’s tendency to play catch-up with awards. Remember last year when everyone thought Sandra Oh would win but Claire Foy caught up with her first season loss for The Crown? They’re probably going to do that again this year and award Oh. My guess is that the majority of the Television Academy think Killing Eve Season 1 is really the season in contention this year. But am I being too cynical?

Speaking of cynicism, the most egregiously cynical prediction here is that of Kit Harington to win Drama Actor. Like really? Jon Snow? The observer of everything in Season 8? The one whose only real action the entire season was to kill Daenerys in the series finale? Exactly what moments of great acting was Harington afforded? When he gaped open-mouthed at Daenerys’s frying of the King’s Landed ghettos? When he gaped open-mouthed at the Night King raising the dead during “The Long Night?” Or maybe when he gaped open-mouthed at Sam when he found out he was fucking his aunt? I can’t even mentally process a Kit Harington win this year. Not when so many great and ground-breaking performances exist against him. Bob Odenkirk. Jason Bateman. BILLY PORTER??? Emmy has the chance to make history with this award, and E”W” thinks they’re giving it to Peter Fucking Brady?

So, why are they going all-in on Game of Thrones?

The cynic in me thinks that the magazine, owned by Warner Media, is just giving props to sister corp HBO, also owned by Warner Media. But that’s surely not possible, right? Maybe they’re really deep-diving into the whole “Checking the Game of Thrones boxes wherever we can” theory. And that’s certainly possible. Everyone loves a winner (see Return of the King). Maybe they’re thinking the Academy didn’t love Pose enough to give it (deserved) supporting nominations and wouldn’t reward Billy Porter this year over Season 2’s far more impactful performance. Maybe it’s a misprint?

But there is something in the air this year. After falling to Netflix in previous years, HBO now reigns supreme in Emmy nominations (thanks to Game). Is there a sense that this is “HBO’s Year?” Will HBO win Drama Series, Comedy Series (Veep or Barry), TV Movie (Deadwood), and Limited Series (Chernobyl)? It’s not out of the realm of possibility. I’m just not as convinced that the HBO love extends to the down ballot races.

Timothee Chalamet is The King in New Teaser Trailer