Guys, it’s time to bring out the M word. In recent years, the morning of the first full festival day has become the unofficial prime real estate on Venice’s schedule. THE SHAPE OF WATER debuted in this slot two years ago and went on to win both the Golden Lion and the Best Picture Oscar. Last year ROMA and THE FAVOURITE screened back-to-back in the exact same slot and scored 20 Oscar nominations between them.

The tradition continues this morning with AD ASTRA, a film I consider to be – snap judgment, festival bubble etc. notwithstanding – a Masterpiece.

Full disclosure, I’ve always been somewhat of a James Gray agnostic. I realize this is something that could disqualify me from film journalism, but what am I doing here if I’m not being completely honest about my opinions. With AD ASTRA, though, it’s like Gray took what I do love about his work – the discipline and elaborate, graceful classicism – and imbued them with suspense, momentum, risk to create something altogether more compelling, invigorating, not to mention profoundly moving.

I never watched the trailer for the film and don’t know what would constitute a spoiler, but – as a rule – I recommend going into it knowing as little as possible. The gist of the story is: In the near future, the solar system comes under attack from sudden, inexplicable electric charges known as The Surge, whereupon a government-like space expedition company sends astronaut Roy McBride (Brad Pitt) on a classified mission to Neptune after connecting the source of the cosmic threat to a supposedly failed project led by Roy’s father Clifford (Tommy Lee Jones) 30 years ago. Without getting into specifics, it’s a journey of constant danger, surprise and, eventually, devastating realizations.

We’ve had a lot of space movies since GRAVITY (this year there’s still LUCY IN THE SKY and PROXIMA coming out). Besides the general thematic fatigue, what’s come to annoy me is how even visually these films tend to look like copies of each other and lose that sense of wonder about them. Not here though. Gray shows an exceptional eye for framing and composition that really gets the stupendous magnitude of the set-pieces across. Starting from the first action sequence 5 minutes into the film, you find yourself not just being in the familiar space station setting with the bluish sphere of Earth shimmering in the background, but positively awestruck by the sheer scale of things.

This sense of frightening vastness also applies to the distance traveled throughout the film. Unlike most sci-fi movies out there where the protagonists are beamed across galaxies but might as well have shot the whole thing in the same studio, you’re made to feel every last one of the billions of miles journeyed by Pitt’s character. When he’s finally reaches his destination, the exhaustion and absolute isolation are physically palpable.

As the head, mind and soul of the film, Pitt gives a shattering performance which draws its strength as much from what is expressed as what is suppressed. Roy is a first-rate spaceman who’s mastered an imperturbable, almost robotic equanimity required for the job. His pulse never quickens, he never loses his cool, as such he can believably survive the most harrowing crises that come his way. However, when secrets about his father are revealed and the place of mankind in the universe illuminated, this immaculate façade finally begins to crack and the wave of pure, unguarded humanity that pours out is heart-wrenching to watch.

Beautifully conceived with insights into the nature of obsession and solitude, gorgeously shot by Hoyte Van Hoytema (some of the images are so distinct they don’t just stun but haunt), evocatively edited by John Axelrad and Lee Haugen to balance tones of adventure, horror and drama, atmospherically enhanced by Max Richter’s superb, volatile score and carried by a expertly measured central performance, James Gray’s AD ASTRA is a singular, visionary achievement that thrills the senses and humbles the mind. Personally I think it deserves across-the-board awards recognition, meaning we could potentially be looking at two acting nominations for Pitt come January. 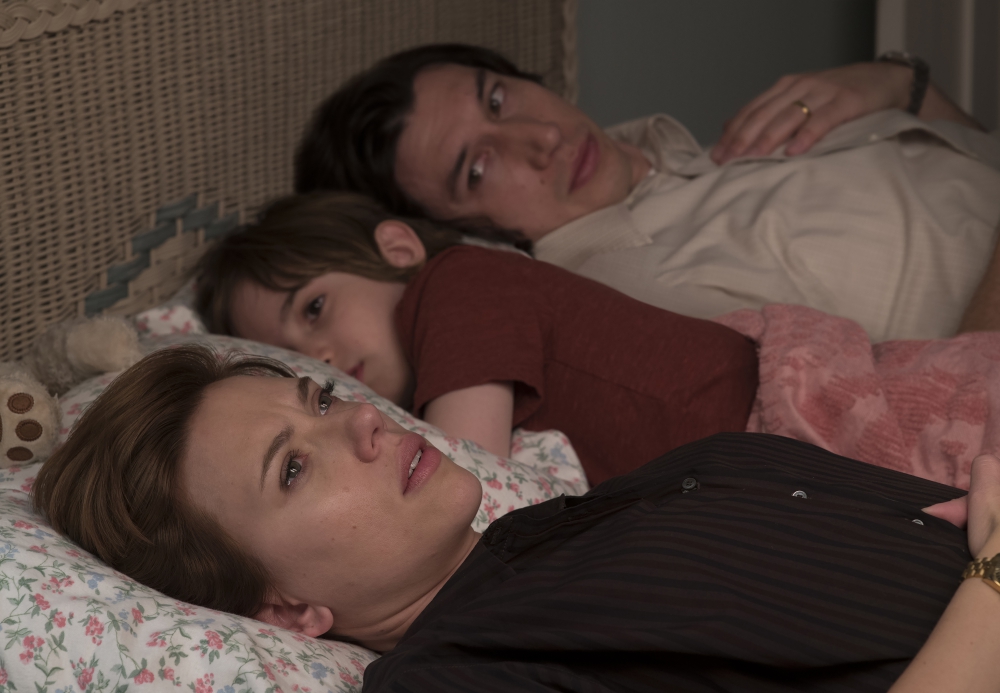 Screening right after AD ASTRA, Noah Baumbach’s MARRIAGE STORY messed me up even if it didn’t blow me away quite the same way – but that’s to be taken with a grain of salt, considering how we’re being fed (premium) apples and (superlative) oranges in such quick succession within the unnaturally warped festival setting.

The NYC/LA-set marital drama centers around actress Nicole (Scarlett Johansson) and theater director Charlie (Adam Driver) who see the intended amicable breakup of their marriage turn into a prolonged, ugly custody battle for their 8-year-old son Henry. Baumbach’s screenplay is a detail-oriented, procedurally accurate investigation of the divorce process. It could probably use some trimming, especially in the first act, but when he gets going, his words sure do serious damage.

Of course he also has a stellar cast to thank for that. Johansson and Driver are both on wonderful form, unselfconsciously exploring the kindness and selfishness of their characters. I found myself particularly affected by Driver who, in a later scene, launches into an extended musical number that’s in no apparent way tragic but, in its unexpectedness and utter tenderness, completely broke me. The duo’s chemistry is on full, fiery display in another scene in the third act where their last attempt at a friendly resolution ends in an violent, heartbreaking exchange that illustrates how easily love can turn into frustration, rage and shame.

MVP for me, though, is Laura Dern, who plays Nicole’s tough, sassy lawyer Nora. At once hilarious, winsome and 100% intimidating, she puts all the men in the movie in their place while getting the loudest cheers from the room for a pretty iconic monologue involving the Virgin Mary. Nominations? Me thinks very likely.

Viewed in the context of late 70’s KRAMER VS. KRAMER and Baumbach’s own 80’s-set THE SQUID AND THE WHALE, MARRIAGE STORY feels in many ways like divorce drama 3.0 updated for the modern audience. The legal proceedings have gotten nastier, the logistics that the parties must negotiate have gotten much more complicated, but most of the intensely conflicted emotions at stake somehow remain unchanged.