Venice Dispatch – Seberg / An Officer and a Spy

Two period biopics bowed in Venice today and injected a sobering dose of reality to the festivities – not just because of the appalling circumstances of their subject matters, but how each of these movies serves as a chilling reminder of the racial hatred still prevalent in our world decades, even centuries later.

Premiering out of competition, Australian director Benedict Andrews’ SEBERG chronicles the last years of American actress, famed Godard muse Jean Seberg’s (Kristen Stewart) life when she became engaged in the civil rights movement during the late 60s/early 70s. After finding success in French cinema, Seberg returned to Los Angeles for a brief stint. Not satisfied with her “frivolous” role as a movie actor, she started actively supporting the Black Panther Party and struck up an extramarital affair with activist Hakim Jamal (Anthony Mackie). That’s when the Hoover-led FBI set their eyes on her, using around-the-clock surveillance and dirt campaigns to cheapen her image, driving the young mother ever closer to the brink of losing her sanity.

What I like about the film is that it’s a slick, polished drama made for adults that we so rarely get these days. You learn about the (probably under-appreciated) life of an extraordinary woman and the racially-motivated government brutality from the not-so-distant past, but at no point does it taste like spinach. Andrews incorporated elements of suspense into the biographical storytelling which are impressively executed and push the narratively nicely along. Those familiar with his feature debut UNA would know his skill at adding tension, that extra edge to inherently dramatic scenes. Here he waded further into formal thriller territory and crafted a couple of nifty set-pieces involving a reluctant surveillance agent (Jack O’Connell) trying to tap into Seberg’s every waking moment.

The film does not expressly indicate the veracity of the events depicted, even if one gets the sense that some of them have more or less been dramatized. That being said, the core message of the film rings true and remains relevant today more than ever. Systematic discrimination, the abuse of governmental power to solidify the suppression of minorities, even the merits and hidden perils of white allyships are all timely, important food for thought.

Stewart delivers a solid performance as the French New Wave icon and unlikely FBI target. Physical resemblance aside, her off-screen image helps fuel her portrayal of someone who’s not only aware of their celebrity but desperate to effect change with it. The camera-ready million-dollar smiles, the tortured looks of doubt and self-blame all come naturally and strike one as effortlessly convincing. The film also gave O’Connell his first substantial role in a while and hopefully we can expect more vehicles worthy of his keenly alert, charismatic presence soon. 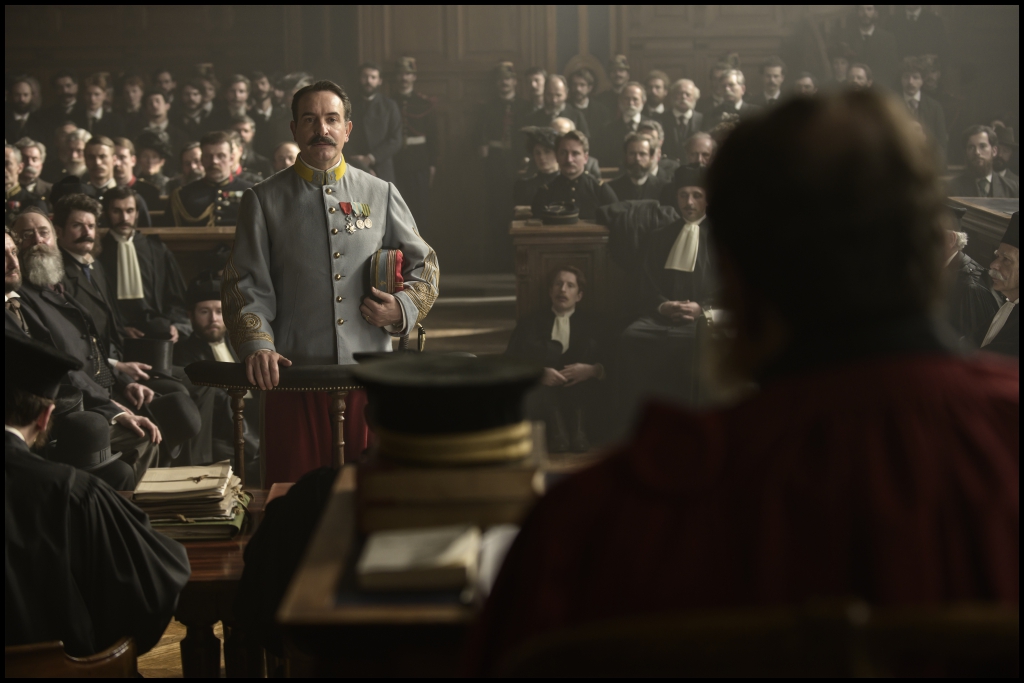 Over in the official competition, the most controversial entry this year also happens to be a race-themed historic drama in the form of Roman Polanski’s AN OFFICER AND A SPY. There are already countless think-pieces, interviews and think-pieces on interviews about its inclusion at Venice so we’re not even going to go there. But is it a good movie? The short answer is: yes.

Detailing the infamous Dreyfuss Affair dating back to the end of the 19th century, the film depicts how deep-rooted antisemitism led to the wrongful conviction of French artillery officer Captain Alfred Dreyfuss and the government’s subsequent attempts at cover-ups. Told mainly from the perspective of police officer-turned intelligence chief Georges Picquart (Oscar-winner Jean Dujardin), it follows Picquart’s long-winded fight against the system to clear Dreyfuss’ name.

At 86, Polanski is still very much in full command of his storytelling instincts. The complicated tale of espionage, falsified evidence, witness collusion, judicial due process unfolds with fluency and precision, so that at all times the viewer has a clear idea of not only the many characters and their agendas, but how, as the plot thickens, sentiments and alliances change. Technically speaking, the film can hardly be faulted either. Pawel Edelman’s classically handsome cinematography and Jean Rabasse’s elegant production design lend it a finely textured look. The lively, often surprising notes of Oscar-winner Alexandre Desplat’s score underline the unspoken indignation beautifully.

This is arguably Dujardin’s most prominent lead role since winning the Oscar (although we did love him in Deerskin earlier this year too) and he did not disappoint. As if all those marvelous funny bones in his body have been surgically removed, his Picquart is a serious-minded man on an arduous, emotionally complex mission. By his own admission, the dutiful officer harbors ill feelings against Jewish people himself. But what he found out about the mistreatment of Dreyfuss and how far the country he’s sworn to serve is willing to go to bury a scandal ultimately propelled him to put everything on the line for the sake of another man. And all these hints of bigotry, integrity and moral conflict are to be found in Dujardin’s skillfully controlled performance.

What I find most unfortunate about Polanski’s inclusion in Venice competition this year is that, in the current climate, whether or not his film wins anything, the decision of the jury will inevitably be second-guessed – if they did not award him because of his person or, contrarily, if they only chose to award him to make some kind of a statement. This I find unfair – to the director, to Lucrecia Martel’s jury and to the festival.

"We Are All Warriors." Tigers Are Not Afraid - A Dark Haunting Fairy Tale From Issa Lopez