Best Actress — A Frontrunner, Last Year’s Shocker, and a Strong Year for Women of Color

Renee Zellweger leads the Best Actress race, at least so far this year. But it is also a strong year for women of color in both the lead actress and supporting actress categories, with Awkwafina in The Farewell and Jennifer Lopez in Hustlers (lead or supporting), along with Lupita Nyong’o headlining Jordan Peele’s hit horror film, Us, Cynthia Erivo for Harriet, and Alfre Woodard in Clemency. And further down the road, we’ll have Jodie Turner-Smith for Queen and Slim.

In general, the Best Actress race is the least inclusive category, due to there being such a shortage of lead roles for women at all, and for women of color especially. But this year, at least so far, it seems like there has been much more inclusion all the way around.

Last year’s Best Actress race was one of the biggest upsets that I’ve seen in the two decades I’ve been covering the Oscars, when Olivia Colman for The Favourite prevailed over Glenn Close, who was on her seventh Oscar nomination with no wins. The problem? The Wife wasn’t as well-liked across all the branches as The Favourite. 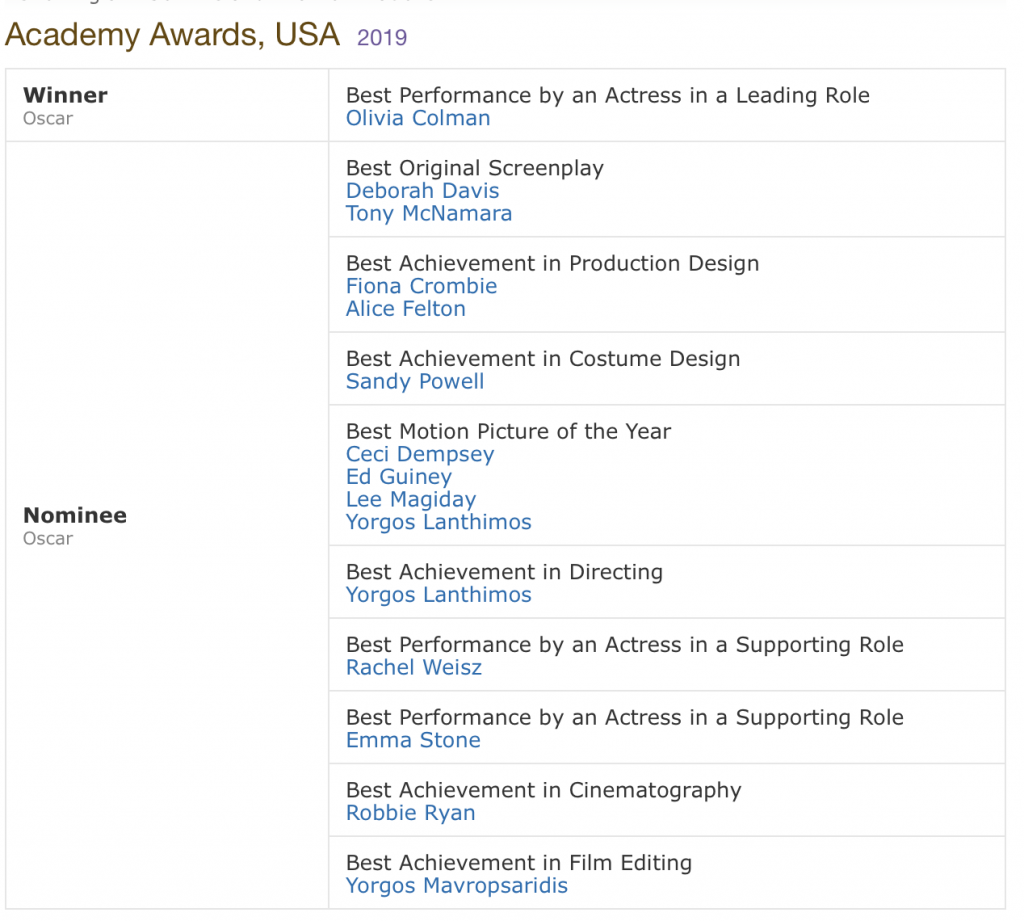 The Favourite had ten nominations, including Best Picture, Best Director, and Best Original Screenplay. It won no other Oscars except Best Actress. Without knowing Glenn Close’s back story or not caring about whether she ever won an Oscar for her past work, this choice would likely be a no brainer, despite the fact that Emma Stone was really the lead in The Favourite and Olivia Colman a supporting player. But Colman was great in the role and clearly the voters felt that they needed to lean towards the film that had more nominations overall.

A similar problem could present itself this year if Judy earns just the single Oscar nomination for Renee Zellweger. It could be enough, as it was with Julianne Moore when she won for Still Alice, but will there be other contenders that bear the weight of their entire films as Colman did?

There are at least two films that need to be seen before we’ll know the full contours of this race, and those are Greta Gerwig’s Little Women, with Saorise Ronan once again headed for a Best Actress nomination, and Bombshell, with Charlize Theron as Megan Kelly. Both films are going to be ensemble works, headed for SAG with exactly the kind of thing SAG likes: big stars, and lots of them.

Also headed for SAG in a really big way will have to be Noah Baumbach’s Marriage Story and the lead performance of Scarlett Johansson. Along with her supporting turn in Jojo Rabbit, Johansson seems to be a very strong Oscar player right now. It could turn out to be the year of Scarlett Johansson and the year she wins an Oscar. It’s definitely going to be an “in it to win it” kind of situation, where campaigning, I would assume, would matter.

The way I see it, there are four main ways Best Actresses win:

So, where are we now in the Best Actress race? It looks something like this:

Frontrunners on paper – not seen or reviewed:

That’s six names. One will have to go, but which one? It will depend on the movie itself, how much voters respond. Jordan Peele’s Us is a horror film and not traditionally Oscar bait, but Nyong’o work is extraordinary in the film. The film made $175 million and she leads the cast. That has to be a big deal. It is the only film besides Captain Marvel with a female in the lead to land in the top ten highest grossing films of the year. Will that matter?

Other contenders I think have a shot – all four of these films revolve around the female leading the story (again, kind of unprecedented):

It’s early yet, and there are lots of films to see, lots of buzz to make, lots of shitstorms to wade through. This is but the start of a very long season.

Emmy Confidential: The Producer Votes With the Heart