by David Phillips
in News, Reframe
3

It’s an odd distinction being the least successful film with Hannibal Lecter in it. It’s a fate that Michael Mann’s superior serial killer procedural Manhunter from 1986 does not deserve, but as William Munny once said, “Deserve’s got nothin’ to do with it.”

To start out, let’s just say, “mistakes were made.”

The genesis of Manhunter is a pretty tortured one. Famed – and somewhat infamous – producer, Dino DeLaurentis had acquired the rights to Thomas Harris’ Red Dragon. However, he had also just come off the box office failure of Michael Cimino’s Year of the Dragon in 1985. For reasons that would escape even the most sage-like, DeLaurentis concluded that calling the film after the title of the book was “too soon” after Year of the Dragon, and despite the fact that the two films were being released almost exactly one year apart, ol’ Dino thought movie goers might get them confused.

Which is where the no good, awful, white-label/black-text generic name “Manhunter” came from. It’s atrocious, really. It distanced the built-in audience from the book away from the movie and it tells you nothing distinctive about the film. Imagine Star Wars being called “Space Movie,” or better yet, “The Silence of the Lambs” named “Female FBI Agent.” To tell you the truth, I think both of those are still better.

The film also suffered from a bit of bad luck in the casting of its lead, William L. Petersen. That’s not to say that the man who would (sadly, to my mind) go on to become quite famous from doing two hundred and six seasons of CSI was bad in the movie. On the contrary, Petersen is so good that I become more than a little depressed thinking of the career he should have had. As agent Will Graham whose skill at getting inside the minds of serial killers has taken such a personal toll on him that coming out of retirement for “one last job” isn’t just a strain on his marriage and his newly sedate life, it’s a risk to his sanity, Petersen simmers brilliantly through the whole film. He never goes over the top. He never goes big. Even when it would be easy to do so. His confidence as an actor who held only one other significant film role under his belt is truly something.

That other significant role is how Peterson got cast in the first place. Big names like Paul Newman, Richard Gere, and Mel Gibson were all on the short list to play Graham. That was before Mann got a look at Peterson in William Freidkin’s sorely underseen, To Live and Die in L.A. As secret service agent, Richard Chance, Petersen gives a live wire performance as a man who isn’t looking for the edge, he’s so far past it, he can’t even look back and see it anymore. After one look at To Live and Die in L.A., Mann had his man.

Sadly, To Live and Die in L.A. found no great audience either while in theaters, and Peterson may as well have been an unknown quantity when Manhunter came out nine months later.

Therefore, you had a poorly named film with a lead actor who audiences couldn’t pick out of a line-up (it maybe didn’t help that Petersen barely even looks like the same guy in To Live and Die in L.A.), and a studio that had no idea how to market a movie lacking an obvious connection to its best-selling source material, and an all but unknown lead actor.

As for Mann, he had suddenly become a hot commodity again after bringing Miami Vice to the small screen in 1984. His first film, Thief starring James Caan from 1981 is a crime-noir classic. His second film, The Keep from 1983, an odd European horror film that flopped badly, cut his career momentum off at the knees. The huge success of Miami Vice restored his capital in Hollywood and Mann chose Red… “Manhunter” (sigh) as his return to film.

You can see the visual pallet of Vice throughout Manhunter. It’s a slick film with a distinctly 80s style. Pastels, sun-baked beach-side scenes, and suit jackets with shoulder pads. That dating is of mild impact though, because what Mann produced is so intense and relentlessly devoid of commercial concerns. That’s not to say that Manhunter isn’t entertaining – it most certainly is. What’s unique about it is how it is more concerned with the internal life of Will Graham and what he is chasing. Namely, a terrifying Tom Noonan as “The Tooth Fairy” – a serial killer with a fetish for a William Blake painting, and a mean pair of dentures. 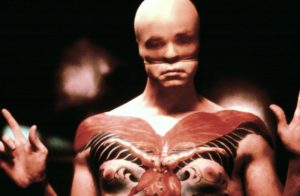 Manhunter spends a lot of time with Graham walking through crime scenes, putting himself in the killer’s footsteps. He’s not just striding into a house where horrors took place, he’s walking through the Tooth Fairy’s head space. With every second he spends there, you feel the psychological strain he’s under (the short-lived but brilliant Hannibal series on NBC leaned into this aspect even more heavily). While the film has its share of cop stuff, even that is muted. All in the favor of having you watch Will Graham do nothing more than think. Which I suppose doesn’t sound exciting. But the intensity of what’s going on behind Peterson’s eyes feels like nothing less than a series of life and death, hanging on by a thread type moments. It feels that way, because that’s exactly what they are.

Now, let’s get to Hannibal Lecter (or Lecktor, as it’s spelled in Manhunter). Long before Brian Cox began psychologically tormenting his children on Succession, he started doing it here with Will Graham. Cox’s take is less theatrical and more matter of fact than that of Anthony Hopkins. His screen time is even shorter than Hopkins’ 16 minutes in The Silence of the Lambs. He sure does make great use of it though. While Hopkins leaned heavily on the cultured nature of his Hannibal, that aspect is more implied here by Cox’s near-perfect diction. He also comes off slightly less aristocratic – almost like an unusually well-read longshoreman. While it’s hard to compare the work of Cox against the iconography that Jonathan Demme and Anthony Hopkins created in Silence, it is more than fair to say that Cox, with his dead-beady eyes and casual malice, is more than serviceable in the role. In fact, I can imagine a small universe of people who might wave their hand at blasphemy and find it more grounded, superior even.

Peterson has only one in-person scene with Cox in the film (they later speak by phone). Graham may have been Hannibal’s captor, but when they meet in an impossibly pale, antiseptic jail cell, you soon see that Graham is a prisoner of a sort too. Hannibal Lecktor still lives in his head. And when Lecktor so perfectly begins pushing Graham’s buttons, you will soon question which man is free as Graham runs from the cell and down a winding path of stairs as if being chased by wolves. The thing is, he can’t escape the pack. Because they aren’t behind him. They are inside of him.

There are a great many other things to praise about Manhunter. There’s a wonderful turn by a very young Joan Allen as a bind woman who briefly makes the Tooth Fairy reconsider his mission to become the Red Dragon. Stephen Lang is remarkably smarmy as the ill-fated tabloid reporter, Freddy Lounds. Dennis Farina makes a fine Jack Crawford too. As well, the procedural detail in Manhunter goes far beyond what most crime films of its day bothered to attempt. It also looks grim and beautiful at the same time. In many ways, I think Mann found the visual aesthetic he has since matched to the masculine themes he’s been making movies about ever since (see HEAT). In that regard, Manhunter is Mann’s template.

I mentioned before that there is a second scene between Graham and Lecktor that takes place by phone. No one is in danger in this moment, but as Hannibal Lecktor elucidates the motivations of The Tooth Fairy, a great unease builds throughout. Lecktor talks about the diabolical killing efficiency of God. That killing must feel good to God since, “he does it all the time.” He speaks of a plane that God took down and a church roof he dropped on top of his worshipers.

“Why does it feel good,” Graham asks.

Lecktor, feet up in bed, replies, “It feels good, Will, because God has power. And if one does what God does enough times, one will become as God is.”

Lecktor continues to prattle on with even more examples of God’s wrath. leaving Will Graham speechless. In that moment, Hannibal Lecktor reminds us all of how small we are. Whether it’s God, or a man convinced he is “becoming” William Blake’s Red Dragon, we are at the mercy of forces beyond our reasoning.

What is there to say after realizing that? Just like Will Graham, I’ve never found an answer.

2019 Emmys: Closing The Chapter on the 71st Primetime Emmy Awards