Composer Mac Quayle on Creating the Music for ‘The Politician’ and Saying Goodbye to ‘Mr. Robot’

by Jalal Haddad
in ADTV, Interviews
0

For the past six years composer Mac Quayle has formed one of the most eclectic creative partnerships beginning all the way back at American Horror Story: Freak Show. Since then that partnership has led to Quayle developing one of the most eclectic filmographies in recent memory writing music for everything from a broadcast procedural to a classic Hollywood period piece to an infamous 90s courtroom drama to an apocalyptic horror fest. 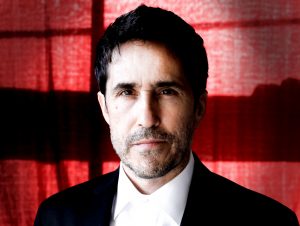 In fact chances are you’ve seen at least one of his collaborations with Murphy including his music for Feud: Bette and Joan, Scream Queens, 9-1-1, Pose, both seasons of American Crime Story, as well as the past six seasons of American Horror Story. This fall he’s diving into even more uncharted territory, the upcoming Netflix comedy The Politician.

Recently he has also been finishing up the score for the final season of Mr. Robot premiering this fall. In 2016 Quayle won an Emmy for his work on the critically acclaimed show’s first season.

Mac Quayle spoke with ADTV on how he has kept his partnership with Ryan Murphy so fresh especially with the upcoming Netflix comedy The Politician. You can also read his insights on his different 80s synth compositions in American Horror Story: 1984 and Pose as well as his excitement for the upcoming final season of Mr. Robot.

For six years now you’ve worked closely with Ryan Murphy on some of his most popular shows. How did that partnership begin and what keeps you coming back?

I was working on Ryan’s film The Normal Heart as an additional composer for Cliff Martinez. Through that I met one of Ryan’s producers. Six months later out of the blue they called me and told me they were going in a different direction with American Horror Story that season. I wrote a piece of music that afternoon and the next day they hired me. That was the beginning of it all five years ago.

I think what’s evolved over time is this level of trust. He can come to me with a completely new project and a completely new sound and trust that I can give him what he needs to tell his story.

Your next collaboration with Murphy, The Politician, is tonally very different than a lot of your other recent projects. What were your initial inspirations for the comedy?

Tonally it was very different but I did see a lot of initial similarities to Scream Queens. There was this loose connection of characters with rich young people behaving badly while delivering fast witty dialogue. Other than that they’re completely different and something I had never done down to the story and setting.

Ryan was very specific about wanting the music to be fun without being comedy music while also incorporating a sense of mystery. There’s all kinds of intrigue and the caper and we wanted the music to describe that but that’s pretty broad and not a lot to go off of stylistically.

After plenty of trial and error we came upon this sound that had a Spanish influence. That’s all about the location of the story taking place in Santa Barbra and its long Spanish history. On paper I never would have come up with that idea for the sound of the show but it worked. It’s not the complete tone of the show but more this flavor. A classical music flavor. A lot of it is upbeat and fun.

How did you approach the pilot episode? Was there a scene that you began with and branched out from there?

Actually we tried a lot of scenes initially in our early experimental phase and there were a couple of good ideas here and there but nothing was setting us on fire. Then there was the scene where Payton speaks before the student body after the death of River. The music we used was a little slow and a little sad. I wrote a trumpet melody and incorporated nylon string guitar. That’s the first time we got excited. We loved that piece of music and immediately knew it was the sound. From there everything else came from that and it became the palette of the show; nylon string guitar, trumpet, piano, upright base, percussion, and some strings.

As the season progressed were there any unique challenges you had to tackle?

It was a funny thing with this show because so many of the challenges were right at the beginning of trying to discover this sound. Once we found it the rest felt like it came effortlessly. I don’t know why that is. I used our palette of sounds, I did fast-up tempo pieces, we wrote a Flamenco piece, maybe even a tango at one point but it all came from the beginning.

In pure Ryan Murphy fashion The Politician features plenty of A-list actors in over-the-top roles. Was there a particular actor or character that you loved writing the music for?

They were all fun but Jessica Lange’s character is so over the top. She has an early scene where she rushes into the hospital room. That’s the scene I wrote the flamenco piece for because there was just something about her energy and passion as she whirled into the room that reminded me of a dancer. That was a lot of fun.

There were also a lot of emotional scenes between her and Infinity as well as some creepy scenes where you begin to discover what she’s really been up to this whole time. Her character was so despicable and she was one of the more rewarding characters to write for.

In addition to The Politician this year alone you’ve worked on a handful of projects including 9-1-1, Pose, and American Horror Story. How do you make sure that you keep each musical landscape unique without becoming repetitive? Especially for a show like American Horror Story which is currently in its ninth season.

I try to put up walls between each project and create a musical sound for each one. It helps me do my best to avoid repeating sounds throughout projects and seasons. It also helps that we do this in collaboration with a lot of people there to call it out when they begin to blend.

The idea for 1984 was an homage to 80s slasher films so the so music was an homage to those soundtracks. So it’s very much inspired by the work of John Carpenter and others.  We did a little of that in Scream Queens, playing with horror and synth scores. There we did it in a more modern way. In 1984 we really wanted to make it sound like it was picked right out of that period. I constantly found myself worrying it sounded to modern. In the end 1984 is unique because its much darker, much more grittier, and more retro.

You’ve had to explore the sounds of the 80s a lot lately between 1984 and Pose.

Ryan really wanted that 80s synth score for Pose but luckily these are two completely different worlds. Pose obviously isn’t horror and a key element to that show’s sound was incorporating all of these established 80s songs. So my job as the composer turned out to be mostly scoring these emotional, vulnerable moments between the characters in between the songs. Occasionally I was able to work on these funky dance numbers but primarily I was trying to push these different emotions over the edge.

In a couple of weeks the fourth and final season of Mr. Robot premieres. You’ve been with the show since the beginning. How has the musical sound of the show evolved?

The core sound of the show is very electronic. That was established in the very first meeting with Sam and that’s remained the foundation. The first season was purely electronic but from there we expanded. We ventured into classical music; we brought in real instruments like guitar, string, and woodwinds. We played with weird and dark soundscapes to the point that some might even try to question if it even is music. It’s been rewarding to have that freedom to experiment and be as creative as I want.

What else can fans expect from the final season?

I am a fan of the show and have been from the very beginning. My approach for Mr. Robot specifically has been that I don’t read the scripts and I let it hit me fresh. When we get together in post-production and talk about the music I’m watching it for the first time. With all that in mind I’ve only seen the first four episodes. All I can say is that they’re phenomenal and I can’t wait to finish them. It’s like I’m sitting at home waiting for them to air.

In a short period of time you’ve covered a wide range of genres from horror to period Hollywood to dark comedies to broadcast procedurals. What would you love to dive into next?

I get asked this question and every time I give the same answer because I’m still waiting for my chance to do it! I’m a huge fan of adult science fiction. I don’t mean x-rated. Stuff like Blade Runner; intelligent adult science fiction with great ideas and production value. Hopefully someone is listening to my interviews and getting the hint.

‘The Politician’ is available to stream on Netflix beginning on September 27th. ‘American Horror Story: 1984” is currently airing Wednesday nights on FX.