All the runners in the Supporting Actress race are not yet at the starting gate, and thus, it’s harder to figure out which of the contenders will go the distance to the big show. We can try to triangulate the past, to figure out any patterns that emerge. To do that, let’s first look at how many in this category have recently come from Best Picture nominees* and winners*.

There are many that were frontrunners early and never lost their spot. This is true of King for sure, and a lot of that may have had as much to do with her stature in the industry as the performance itself. Alicia Vikander is a good example of a super-hot celebrity who basically won for giving a leading performance. It was deserving but it was hardly supporting.

Where and how does their frontrunner status begin? It starts early, with buzz and critics awards but it can be cemented at the Golden Globes. Of those above, 12/19 of them also won the Globe. Who didn’t and why? Kate Winslet won the Globe for Steve Jobs but the Academy did not like that movie and gave their prize to Alicia Vikander who was nominated for lead at the Globes (supporting for Ex Machina). Jennifer Lawrence won for American Hustle but that win did not sit well with the audience and especially Oscar voters because Lupita Nyong’o was the one people thought SHOULD win, and so she did win the Oscar, and 12 Years a Slave won Best Picture. The only other really famous one (other than Kate Winslet’s double nominee thing, like Vikander’s) was Cate Blanchett winning for I’m Not There at the Globes but Tilda Swinton winning for Michael Clayton at the Oscars. That one probably went down that way because the Academy clearly wanted to give Michael Clayton something – as they liked the movie enough to give it a Best Picture nomination. In my opinion (though I love Swinton in everything) Blanchett was robbed.

With a few exceptions, a lot of the supporting actor wins (for male and female) are anchored to a lead performance. In almost all of the above cases that’s true, and in many cases that lead was also nominated. This year is no exception.

So, for Supporting Actress, having early buzz is a bigger deal than being in a Best Picture contender (the opposite is true for Best Supporting Actor). Does anyone have that early buzz right now? Well, one person does and that’s Laura Dern, who has not only never won an Oscar but is riding high right now, catching a wave of sudden Dern love that came out of her work in Big Little Lies. How well the Academy likes Marriage Story overall could make the difference here but it isn’t necessary. Dern can take it all the way just on her performance alone. There is no question that, as of right now anyway, Dern has secured her early place in line and could very well go all the way.  Dern would be anchored to either Adam Driver or Scarlett Johansson.

She does have challengers, however, namely Scarlett Johansson who is brilliant in Marriage Story but also in Jojo Rabbit. If she becomes a double nominee and isn’t going to win in Best Actress, and they really like Jojo Rabbit a lot, she could benefit. If Jojo, say, wins Best Picture, then she could absolutely be swept along with it – as she too hasn’t won.  Thomasin McKenzie could also up for supporting for Jojo Rabbit.  Johansson or McKenzie would be anchored to Roman Griffin Davis.

Another name that’s floating around a lot is Jennifer Lopez who is fantastic in Hustlers and is probably overdue for recognition, as she’s turned in so many fine performances over the years, as she did in Out of Sight. I am particularly fond of the action film Enough. And I even like her in An Unfinished Life. I guess you could say I was a fan … of her acting. She will be on a comeback upswing from the disaster that was Gigli (overblown a wee bit, I thought). Ben Affleck had his comeback, now she can have hers. There is some rumblings about her entering the lead actress category – where she’d have to do battle with Renee Zellweger. Can she win for Hustlers? Sure she can. Maybe easier than in Best Actress but beating Dern is going to be a challenge. Lopez is anchored to Constance Wu.

One of the biggest standouts in Dolemite is My Name is Da’Vine Joy Randolph who has a once in a generation screen presence that you have to see to believe. If the film is well liked and if it gets any nominations at all for its acting, which it should, Randolph will be at the top of the list. Here’s hoping, anyway. Randolph is anchored to the great Eddie Murphy.

Another name buzzing around is Shuzhen Zhao as Nai Nai in The Farewell. And indeed, she is fantastic in the film, it must be said. She plays a Chinese grandmother who really is the anchor that holds the family together. She’s dying but no one is prepared to tell her (the real person, by the way, that she’s based on is still alive and well!). Shuzhen Zhao is anchored to Awkwafina.

Annette Bening is another strong contender for The Report, wherein she plays Dianne Feinstein. Bening, of course, as we all know, has never won an Oscar. She has been doing consistently good work for years. I’ve heard through the grapevine that The Report is playing like gangbusters with Academy members and if that’s true, Bening should have no problem getting in.  Bening is anchored to Adam Driver.

Waves has two great supporting actress contenders – Taylor Russell and Renee Elaine Godsberry in Waves. It is an ensemble piece and if it catches on the way it did in Telluride and Toronto one or both of them could get in.

Gugu Mbatha-Raw is one of the standouts in the actor’s showcase that is Motherless Brooklyn. She would be, of course, anchored to Edward Norton.

Two big movies coming later have potential supporting contenders in them – Greta Gerwig’s Little Women and Jay Roach’s Bombshell. Watch out for these two films to blast through many of the categories we’re planning out now. 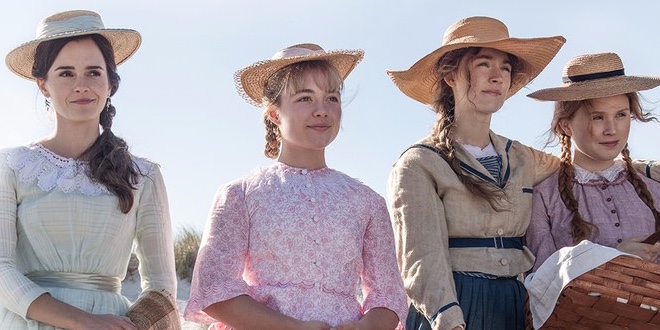 Florence Pugh is considered a sight-unseen contender by many of those I queried on Twitter. Nicole Kidman and Margot Robbie are potential contenders for Bombshell. Pugh would be anchored to Saoirse Ronan, and Kidman and Robbie anchored to Charlize Theron.

With so many options, it is impossible right now to narrow down a five. But if I had to — I’d probably go:

With Little Women and Bombshell TBD.