by Clarence Moye
in Film Festivals
27

“PARASITE is a magic trick of cinema by the visionary director Bong Joon Ho,” commented Tom Quinn, founder of Neon.  “We at NEON couldn’t be more thrilled and honored to have been invited to participate in this year’s “nothing finer than” 919 Film Festival.  So thank you Chapel Hill for awarding PARASITE with the Audience Award.  Your good taste is one hell of a treat.”

On the mouths of many after the Audience Award presentation and the explosive opening weekend box office, is Parasite a quiet front runner for the Oscar? We’ll see…

The festival, for me, was another rousing success. Both intimate and exceedingly well executed, Film Fest 919 offered a generous amount of American and international cinema. The festival’s slogan, “Catch the Films Before They Catch On,” seemed especially appropriate this year as many festival goers were likely just discovering what appears to be a pending tidal wave of awards for Bong Joon Ho’s tremendous Parasite. Nearly everyone I talked to at the festival – from casual moviegoers to budding critics – gushed about the film. So, it’s no surprise that the film received the Audience Award – it clearly built a consensus as the film everyone liked.

The same cannot be said for the closing night film, JoJo Rabbit. I absolutely loved the film as did many in the audience judging from consistent laughter and hearty applause when the lights came up. However, it is a divisive and challenging film as Waititi’s sense of humor doesn’t suit all tastes. For me, Waititi fashioned a daring concoction, a family-friendly film that blends the savagery of war with the innocence and naivety of childhood set against a Nazi-loving backdrop. The film’s humor fell flat with many, but Charlie Chaplin’s The Great Dictator was similarly received. JoJo Rabbit is outlandish. JoJo Rabbit is bizarre. I totally dug it. I cannot wait to see it again.

I saw a lot of other very good to great films during Film Fest 919. Aside from Parasite, James Mangold’s Ford v. Ferrari kind of stuck out like a sore thumb – a big budget, old fashioned Hollywood film doesn’t really belong in an indie or international-leaning film festival – but the audience warmly received it. Even if a little log, much of it is extremely entertaining, and the crafts are fantastic. While it didn’t ultimately factor into the final awards conversation, it did seem to be something nearly everyone at least liked, according to my informal polling of festival attendees.

Saturday was really my only full day of film watching as the “real world” tended to get in the way. But the buzz in the atmosphere and variety of programming tends to propel you through a full schedule. I started Saturday with a hugely anticipated screening of Craig Brewer’s Dolemite Is My Name, a film that received such a huge reaction in the room that I’m honestly surprised it wasn’t closer in the running for the Audience Award. Eddie Murphy is perfection in the lead role as comic Rudy Ray Moore as is much of the large ensemble. If the film had a larger cinema presence, then I would argue that Wesley Snipes would be a sure-bet for a Supporting Actor nomination for his scene-stealing role as director D’Urville Martin. Hopefully, enough Academy members will catch this on Netflix.

Second up was Amazon Studio’s The Aeronauts, a strange film that’s perhaps more remarkable for its mere existence than for the finished product. It’s an unusual tale set in the 1860s of a budding meteorologist (Eddie Redmayne) and a hot air balloon pilot (Felicity Jones) set out to break records in their balloon and maybe learn something about the weather along the way. The balloon sequences are the most fascinating and thrilling in the film, but they’re interrupted by mundane flashbacks that undermine the narrative. It wasn’t my tastes, but festival organizer Carol Marshall told me the film scored well with audiences. 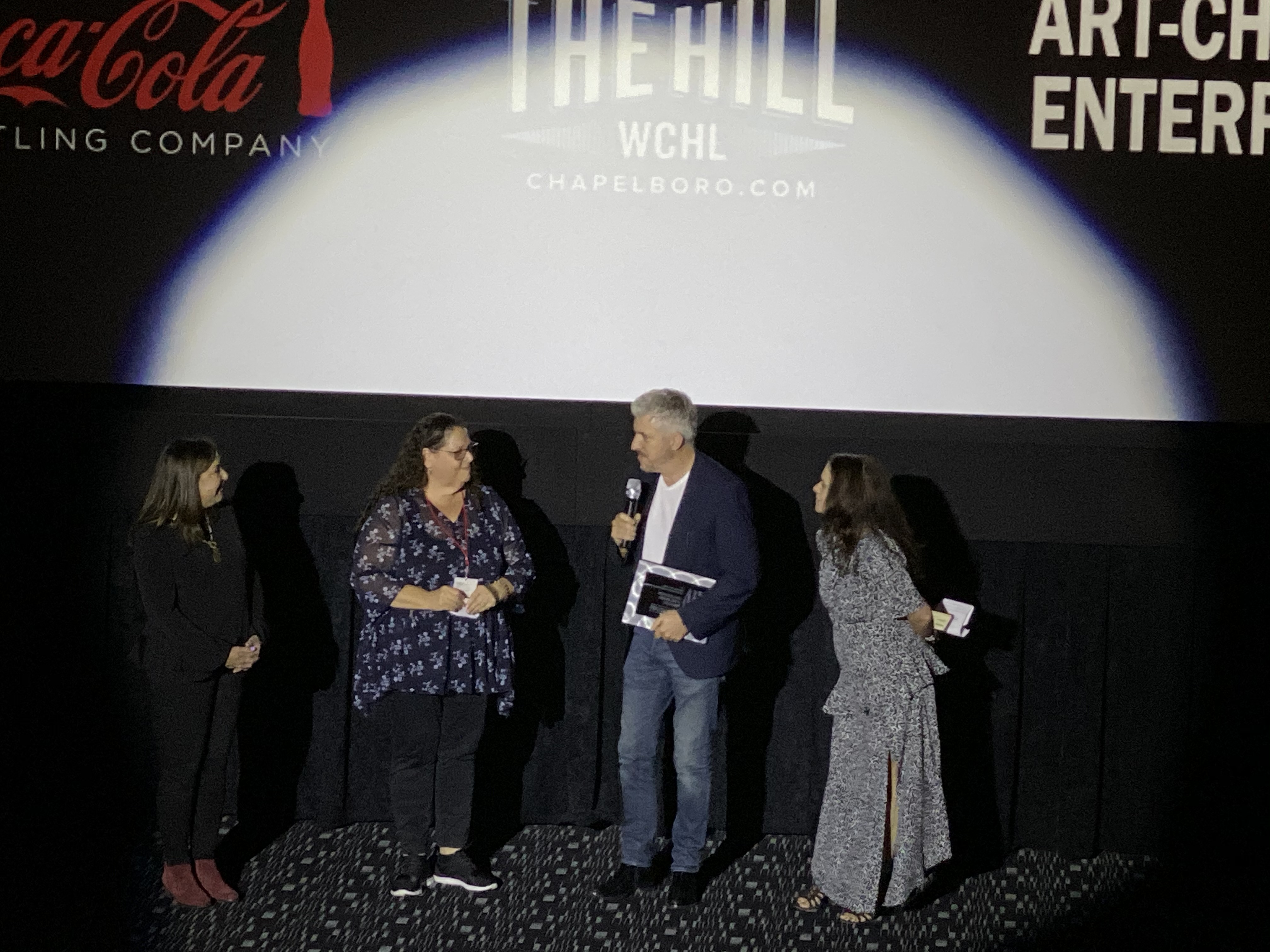 Saturday night closed with a screening of The Two Popes and an award presentation to screenwriter Anthony McCarten. McCarten received the inaugural Distinguish Screenwriter Award for his adaptation of his own stage play. The film details the vast philosophical differences between Pope Benedict XVI (Anthony Hopkins) and his eventual successor Pope Francis (Jonathan Pryce).

It’s a gorgeously acted, intense film filled with lofty discussions and heavy subject matter. After two previous shots at an Oscar (for writing and producing The Theory of Everything and for producing Darkest Hour), McCarten seems a top contender for his dense yet elegant screenplay.

McCarten held a Q&A following the film with festival organizer Claudia Puig. During the fascinating conversation, he talked about adapting the material and his inspiration for the story. As the main characters negotiate and eventually set aside their personal differences, McCarten drew parallels between their story and our modern political environment.

“The conservative and progressive arguments are becoming very angry and full of resentment. There’s a middle ground, and we need to reclaim the middle ground,” McCarten offered. “The middle seems to have collapsed in our society.”

It’s a note well attuned in the brilliant film, and it resonated with this festival’s audience.