Right now, at Gold Derby and mostly everywhere online, there are two competing stories for who will win Best Actor. The first is Joaquin Phoenix for his performance in Joker (our own Jazz Tangcay has him to win it), and the second is Adam Driver for his performance in Marriage Story. Both of these predictions are based on three things: how much people like the film, how impressed they are by the performance itself, and the third and most important, how they feel about the star’s “hero’s journey.” That is to say, is it at last the time to place the crown on the proper king? A large consensus vote requires that a lot of people agree on these three things. But the most important of these is how people feel about the star.

If an unknown actor had been cast as Joker and had given the same level of performance as Joaquin Phoenix does, there is very little chance that performance would be the frontrunner, if Joaquin is indeed the frontrunner. But it is largely out of love for Phoenix, and his body of work that many are supportive, with the sentiment being built that this could be his Oscar win at last. That’s how it often goes with actors. They get to a point where a consensus believes that “it’s time.” Rarely does the win go for just the performance, although arguably Eddie Redmayne, a relative nobody when he started his Oscar campaign for The Theory of Everything, might have gotten there just on performance alone.

Adam Driver has the harder job of convincing voters that this is his “time,” since he’s not been around nearly as long as Phoenix has. One could mount a pretty good case that by now Phoenix is overdue. He’s been acting for his entire life, starting out as a child actor in the 1980s. He really came up as a force with Gus Van Sant’s To Die For (still my favorite performance of his), but on the strength of films like Gladiator, The Master, Inherent Vice, and You Were Never Really Here, he has almost become a living legend. If the consensus is ready to give him his ovation now, this could be the year he wins. There is only one problem for Phoenix and that is that Best Actor is almost always tied to Best Picture. Moreover, Best Actor often goes to someone that people feel good about voting for. They’re going to feel kind of yucky about voting for a guy who shoots Robert De Niro point blank at the end of Joker, but they might feel good about voting for Phoenix.

Jazz and I had this conversation on Twitter and I said if Joker is nominated for Best Picture then it’s pretty much seals the deal for Phoenix. She argued that he could win anyway, like Jeff Bridges did for Crazy Heart for the same reason: people like him, people wanted to see him win finally. There is a slight difference between the two. To date, I have never seen anyone campaign harder for an Oscar than Bridges did that year. He made it very clear he was in it to win it. Phoenix has a more Brando-like approach to winning an Oscar and doesn’t seem to particularly care whether he wins, one way or the other. Not to say he wouldn’t be grateful but he seems clearly like the type of guy who is in it for the work. That can also work in his favor — a non campaign can sometimes be a great campaign, as Woody Allen can attest.

Adam Driver has two performances in play this year, with Marriage Story and The Report. He’s been slowly building an admirable body of work but really does turn himself inside out in Marriage Story. It is a hardcore, gut wrenching performance and will most definitely benefit from being a strong Best Picture contender. His also plays an admirable character and people sometimes feel inclined to vote for the role onscreen, where the empathy isn’t only wrapped up in an actor’s career trajectory.

The internet, or pundits on Gold Derby, also seems to believe that the next three contenders for Best Actor right now are:

Leonardo DiCaprio, Once Upon a Time in Hollywood
Robert De Niro, The Irishman
Antonio Banderas, Pain and Glory

Followed by Jonathan Pryce in The Two Popes and Eddie Murphy in Dolemite Is my Name.

I personally see Eddie Murphy as the actor who should win and the one who deserves to win. This too is based not only on his long career in Hollywood, but also on his outstanding performance as Rudy Ray Moore. Murphy gained weight for the role, and transforms himself completely into Moore. But the Oscars are a popularity contest before they are anything else and right now, for whatever reason, the conversation is more about the two at the top than Murphy. Dolemite is one of the best films of the year and deserves the full awards push from Netflix.

Robert De Niro has two Oscars but he hasn’t won since Raging Bull in 1981. He is more than overdue for a trifecta — and depending on how much voters like The Irishman he could be in line to win again. But he’s in competition with three other male performances in Netflix films: Adam Driver in Marriage Story, Jonathan Pryce in The Two Popes, and Eddie Murphy in Dolemite is My Name. Is that insane or what. 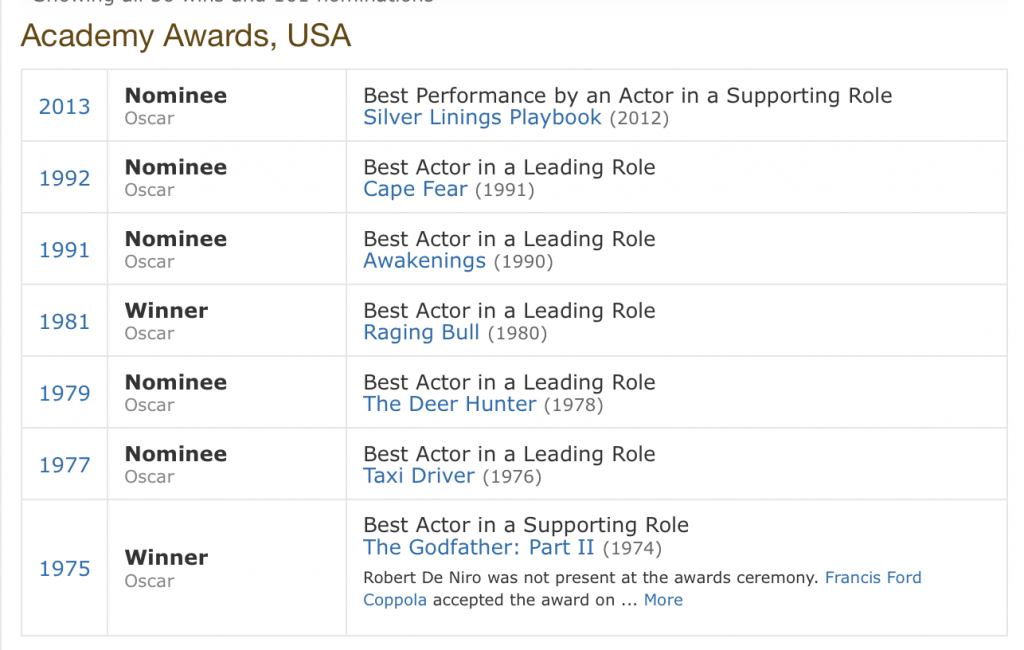 The other performance that can’t seem to get any traction but might surprise people when the votes start coming down is Roman Griffin Davis in Jojo Rabbit. Here is a performance that might get swept up in pure love for the film (and the performance). Every line delivery is spot-on. He anchors the entire movie, and handles the heavy emotional scenes well. Online platforms and film twitter don’t seem to be as passionate about Jojo Rabbit as people in the industry might be, so watch the buzz around that one.

There are so many great male performances that could replace any of these mentioned here. There is Adam Sandler in Uncut Gems, Edward Norton in Motherless Brooklyn, Michael B. Jordan in Just Mercy, Taron Egerton in Rocketman, Robert Pattinson in The Lighthouse, Mark Ruffalo in Dark Waters. It is astounding how many there are. What will likely make the difference, what will clear the path for a nomination are the three things mentioned above: likability of star, liability of movie, likability of character.

The big bumps that could solidify Best Actor will be New York Film Critics, Los Angeles Film Critics, The National Board of Review, and the Golden Globes.

If Joaquin Phoenix wins any of those, I’d say he’s well on his way towards claiming the win. His performance might be just too big to ignore. I will admit to having a slight blind spot when it comes to his performance and this film, as it left a bad taste in my mouth. If that is something voters also feel he might have a harder time winning. There are two other factors to consider for Phoenix — Heath Ledger already won for playing the same role and Phoenix doesn’t play a hero. Daniel Day-Lewis won for There Will Be Blood playing a very bad man so being an admirable fellow isn’t always a requisite. But There Will Be Blood almost won Best Picture too, so if Joker is that admired then there is no more discussion and Phoenix will win the whole thing.

How might the Globes go for Musical/Comedy? The first question to ask is which movies will be placed in the comedy category and which movies are going into drama? But the way it’s looking now, the comedy/musical contenders could be:

Gold Derby sees it that way, anyway — but here’s the thing. If Jojo Rabbit is put in comedy, nobody thinks Roman Griffin Davis is getting in? It doesn’t look like it at Gold Derby but I think that disconnect might need to be rethought a bit. If the kid starts to show up in nominations, or wins, that shows that the love for the film is real.

I think there is a pretty good chance Jazz might turn out to be right about Joaquin Phoenix winning — but I’m not 100% sure yet based on the film itself. Will it show up for Best Picture? How will Academy voters feel about it? On a tragic note: will there be any mass shootings between now and voting and if so, how will that impact the film? And Marriage Story also needs a chance to bake with actual audiences and voters reactions outside the festival scene to see how well that movie plays. We are still in the beginning phase of this very competitive race.

I’m going to run a poll against my better judgment, since it’s going to be very likely skewed towards a certain someone, but what the hell. Let’s do this.

'The Crown' Season 3: Netflix Finally Gives us a Full Trailer