Rudy Ray Moore and Eddie Murphy back in the day

There are parties everywhere this weekend. Screenings are happening with big stars coming out to capture attention. They’re competing against each other, which is driving people crazy – except those who rarely attend such gatherings (raises hand). But by far one of the ones I should not have missed was Quincy Jones hosting Eddie Murphy for Dolemite is My Name. 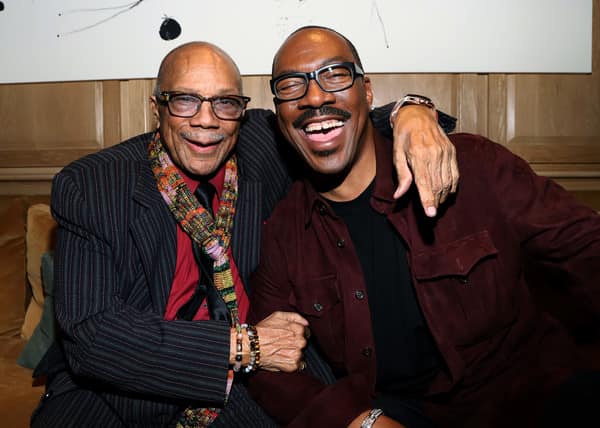 Dolemite is My Name has dropped on Netflix, which, believe it or not, gives it an advantage in an awards season this crunched. With everything pushed back, even by one week, there is a mad dash to this finish, figuring what will get in and what won’t. If Dolemite is My Name is on Netflix, well, that makes it much easier for people to watch it without having to wait for a screening or a screener, anywhere in the world. That’s quite a reach when you think about it.

It used to be that movies that came out early in the year hit streaming, or Netflix, and were available by the time voting came around but Dolemite is getting in earliest – with Irishman and Marriage Story and The Two Popes coming later. It’s making me wonder how it will ultimately do, given its ubiquity heading into the first phase of voting. We won’t know until the end of November where the critics are headed — but if you ask me, the critics are going to be easy to predict this year. They’re most definitely going to go all in for the following three films: Parasite, The Irishman and Marriage Story. I suspect Adam Sandler will get a boost for Uncut Gems and I’ll be watching to see if Joaquin Phoenix starts picking up early awards for Joker, which he might but again, we don’t know how it’s going to land. If he’s Daniel Day Lewis in There Will Be Blood he will start winning early and never stop.

But I would watch out for Eddie Murphy. He, along with Jonathan Pryce in The Two Popes, have the kind of character you VOTE FOR because you feel good about doing so. Both of them represent (and yes, I know we’re still talking ALL Netflix ALL the time, and the jury is still out on THAT one too) making the world a better place. For Murphy, with Dolemite, it’s defying the white wall of how Hollywood presented stories, representing only white people, and their white jokes and their white romances. The movie is about not listening to anyone who tells you can’t do something you want to do in terms of art. In the film someone says “you can’t sell a movie to just five blocks of people.” And Murphy’s Rudy Ray Moore says, “well in every city in America has those same five blocks.” The screenplay is so good, so well written – without ever sacrificing the funny.

Pryce plays Pope Francis, who confronts the old ways of the Catholic Church and forges a new path to bring Christianity back to where it started, to the people, away from money and power. He captures Francis so well, just as Murphy captures Rudy Ray Moore so well, that you really do forget you’re watching these actors.  That is going to make Best Actor at the Globes, if you fold in Sandler and Leonardo DiCaprio in Once Upon a Time in Hollywood and Taron Edgerton for Rocketman extremely difficult to predict.

On the flip side, in the drama category you have one of the darkest Best Actor contenders – sure, there was Forest Whitaker in Last King of Scotland and Day Lewis in There Will Be Blood and Anthony Hopkins in Silence of the Lambs but here we have a character who would have a really easy time winning the Oscar if he did everything he does up until the time he gets a gun and decides it makes him powerful. While that works for a super villain origin story, does it work if you’re making the case that it isn’t a super villain origin story? That it isn’t a “comic book movie”? I don’t know. I could see it going either way. Clearly it has struck a chord with white men, or maybe men in general, who feel ignored, dismissed, ridiculed, blamed for all of society’s ills. When you are white and thus born into a world that promises you the American dream, I can imagine it’s frustrating when that dream doesn’t come your way. Or worse, you’re pushed aside because of a disability. Still, it’s hard to compare it to Rudy Ray Moore who was a potato peeler in the early part of his life and never even shown a door to open, and look at how he simply didn’t accept it. Joker doesn’t accept it either but he turns, instead, to violence. Moore turns to art.

This week, Cynthia Erivo’s Harriet will premiere, Charlize Theron is hosting a screening for Bombshell, Marriage Story had a party last night. It’s all happening.

Tags: Dolemite is My NameEddie Murphy

by Megan McLachlan
4
No Result
View All Result