Interview: Barbara Ling Turns Back Time For Tarantino’s ‘Once Upon A Time In Hollywood’

by Jazz Tangcay
in Interviews
4

Barbara Ling’s greatest challenge on Tarantino’s ‘Once Upon A Time in Hollywood’ was working against construction and demolition as she tried to transform Hollywood 2018 into Hollywood 1969.

The production designer who has contributed to films such as Batman & Robin, Falling Down, and Fried Green Tomatoes was tasked with finding iconic locations in Hollywood for Tarantino to shoot. Except that Hollywood, 2018 looked very different to Hollywood 1969. Where old classic buildings with classic facades once stood, tall glass buildings had replaced them.

Quentin Tarantino wanted his film about Hollywood to feel real. There was no green screen. He wanted his film to smell and feel real. Ling was able to find a block or two on Hollywood Blvd, but just a street over, Sunset Blvd posed a challenge or two for the production designer as demolition crews moved in to build parking lots before she could even start working.

Then there are the locations that still remain, the restaurants; Casa Vega, Musso and Frank’s, and El Coyote. Generation after generation have kept those institutions authentic and helped Ling when it came to creating the sets Tarantino needed.

I caught up with Ling to discuss how she transformed Hollywood for Tarantino: 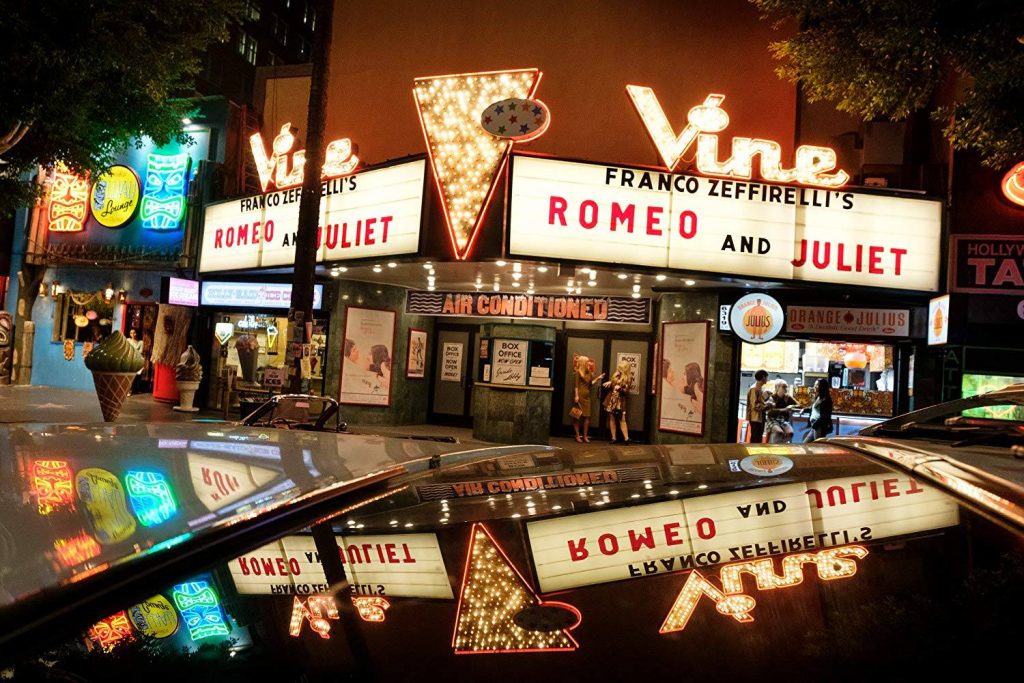 Oh, we couldn’t work fast enough. We’d find a location, and I’d think it was great. Before I could even bring Quinten back, I’d get a call saying, they’d already demolished one side of the building. They were tearing down buildings faster than we could do this movie.

We took sections that had some capability of putting the facades back on them. In other words, the buildings still had the shapes. They weren’t towers. They were two-story buildings. Luckily, Hollywood Blvd had two sets of blocks that were that way.

With Sunset Blvd, we could only use the Cinerama Dome. Even where I did the Aquarius, which was a heritage building. They weren’t supposed to tear down the Earl Carroll Theatre. I started in February and in January, in the middle of the night, the developer working there tore into the parking lot and tore a 60-foot hole for parking.

We said, “This is a heritage building,” and this developer said, “Yeah, we left the building.”

So, you had just one front of that building and we got that. It was happening so fast.

I’m an Angeleno, and I was born and raised there, but we’ve never preserved and it was so sad. Right now, it’s happening so fast. The need for the glass and steel loft buildings everywhere is just incredible. I don’t think even Hollywood Blvd will look like itself for that much longer.

Then, you still have the classics like El Coyote and Musso and Frank’s that are still Hollywood institutions.

The great thing about El Coyote, Musso and Casa Vega is that they are part of this important history, but it’s really Quentin focused. It’s his life and what made him a filmmaker to be in LA. Those are three of his favorite everyday restaurants. He doesn’t just shoot them. We could have never even gotten the time we got to close them if not for him. He has loved Musso ever since he was a kid. Casa Vega is his favorite place and so is El Coyote. It’s fantastic that they are still there. They’re reinvented with each generation, so they’re still holding on to it. The generations coming up love it as much as the generation leaving. I hope they don’t become outpriced for where they are because it’s always about land, rentals, and how much people can make. I do think those three will stay for a while.

We didn’t have to do a lot. There are a few things in the front that we had to do, but inside, we had to get rid of the digital cash registers. Other than that, they’re pretty iconic interiors.

Quentin is so thorough with his process and what he does. What was that conversation he had with you about transforming it?

His main thing from the moment we sat down was, “I want this to be real. I want to see. I want to smell and I feel that Hollywood. I don’t want to do green screen over here or have the digital interpretation. Let’s really change the billboards and let’s put the real facades back on.” That is, to me, very exciting. It’s something we don’t do much of anymore. I knew that what he wanted was to encompass himself, and the actors into an environment that you could feel are real. You’re not just staring at something that’s a piece of green screen where we piece together later. That was the starting ground of this.

I had to go out and figure out where I could attach real things to. It was quite an engineering feat to do, particularly on Hollywood Blvd, to say, “I want the Pussycat Theater back.” To build those marquees, it’s added weight. These are old and fragile buildings that we were working with. We had to also work with engineers to make sure we weren’t going to pull the facade off once we rebuilt the old signs. It was laborious but well worth it.

The night of the first shoot when all the neon lit up the period cars came out and Ari’s costumes were out there, you absolutely believed you were in 1969 because everything was real. It was a movie filming a real street. We pretty much carried that theme through Westwood and everywhere we shot.

We worked in a military fashion of who went in first and the carpenters went in. The painters and decorators had the last layer of dressing the windows and storefronts. I think the reason this movie feels so good is that it is so real. It’s recreating a time in reality.

If you notice, when we did the flashbacks, we would use the real footage and we shot footage that matched into the footage. We did that for FBI and it made it work so much better. 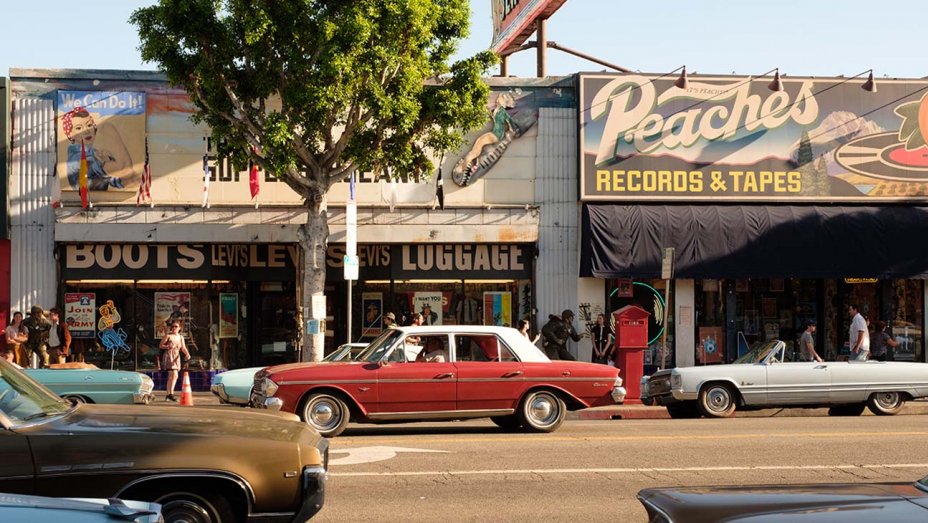 It’s a lot. When people see it the first time, you’re totally bedazzled and it’s a lot. When you see it the second time, you start noticing, but that’s Quentin. There’s so much to see and take in. In 1969, you could have dinner in Westwood and zip down to Hollywood and see a movie. Now in 2019, you would never be able to do that. You stay within your hood. You stay on the Westside. Back then, you could go from Santa Monica to Westwood to Hollywood in one night. That whole idea of driving and the landscape of LA is varied, but you could zip around then. He wanted to show the larger landscape back then. Hollywood was the center, but now, it’s a souvenir land. We just tried to evoke what it was back then; a real place that people went to.

That vastness is what I loved that he wanted to capture. We did the Valley too, and that was important to Quentin. To me, it’s very much a story of Quentin because that’s where he grew up. It’s his view from”everything that made me who I am,” as he says. 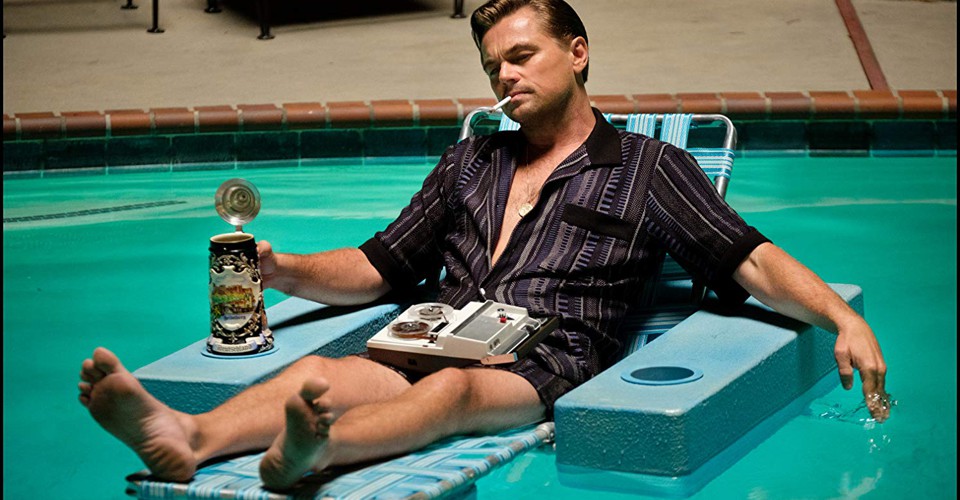 You did the wonderful thing with the houses. The Polanski house, the Dalton House, and the Ranch.

Quentin in his head knows as he’s writing how he’s going to openly stage something. For him, the first thing, those two houses had to be in juxtaposition where you could have a guy in the pool and a crane shot would pull up from the pool, come over the fence and you’d see Tate and Polanski getting in the car. It was such a dream shot. That was the hardest set in the world to find. We knew we needed two houses that had to have certain looks, and I’d make the changes. Also, we needed something where we could have that very specific shot. This was location scouting from Google Earth and walking up and down blocks. Finally, we found a combination that we could make work.

We built the interior of the house on a stage, but we used the real pool and we built the interiors. For that, we then had a piece of the pool that you could see outside the window. It was a complicated setup, but this is where Tarantino shines. He worked out the choreography that as you went out a set door, you went out a real door. The inside, we always knew we’d build that because of the ending.

In designing that, I worked with him because he had this incredibly visceral scene of how he knew he wanted to stage it. He’d say, “Give me a door here and give me a kitchen here.” He knew exactly what he wanted.