Interview: Ruth Carter On The Bold Style of Eddie Murphy in ‘Dolemite Is My Name’

by Jazz Tangcay
in Interviews
4

The last time I saw Ruth E. Carter was in the press room at the 91st Academy Awards. She made history when she became the first — that’s right, FIRST — African-American to win the Oscar for Costume Design. Carter was recognized for her work on Black Panther.

Carter tells me she hasn’t gone back to revisit that moment. “I still can’t watch it. I have to get past all of the anxiety of that day.” She laughs. “I knew that speech before anybody.”

Carter is currently working with Eddie Murphy on Coming 2 America, but we’re here to catch up on her latest creations in Dolemite Is My Name. It’s their sixth time working together.

I heard you only had six weeks to put all the costumes together for this.

I had about six weeks so we had to hurry and put things down on cutters tables. We had to get shoes started. It was really one of those fast preps and when that happens you feel the movie is prototyped. You know, try it on in the scene and we were improving it as we went along.

What were your influences for the film and how did the fabric houses work?

I had to find 70s fabrics because the thing that will kill a good remake is the wrong fabric. We went to a company that I knew had that stuff, and that stuff was all very 70s bulks of fabric. It was double knit polyester and different tones. I had picked so many bulks of fabric from this store that we had to send a special truck to pick it all up. Once we got it back to the studio, it’s basically what survived. It’s not necessarily curated for your film. I went to the really bold colors, and I sent them out to be over-dyed so I could make some clothing out of it and not just be 70s explosion.

We did pull some real vintage. We went to the costume houses, and we pulled real vintage, but even then, there were so many style pockets in the 70s. You had the hippies, the pimp style, and that was the hardest to find. I really wasn’t trying to make everyone a poster for the 70s. I wanted a realistic version of life on the streets in the 70s or inside the nightclubs. I wanted people to feel good in the scenes.

One thing about background a lot of the times is that when you style a scene and people feel the dress and their character, they come alive.

We had a shot of Eddie on stage and they decided to put his hat and his white fur coat on one of the ladies who was sitting in the front row. It just worked so perfectly. When that magic happens, I feel really proud that it’s a result of us designing the background to be as important as a character in the film.

My costumers went about pulling clothes that weren’t always screaming bell-bottoms, platform shoes, and big round Afros. I did a line-up every day of all of the people in each scene. I’d walk and check them out personally to make sure that there was nothing wearing them. I wanted to make sure they were wearing the clothes naturally and normally. Whether they were walking down the street or going into the nightclub.

I remember some of the trends. I had the jeans that had the little rainbow on the pockets. I had the cropped tops. I’d wear jeans with Converse. So, it was important to see that and to feel like I was reminiscing some of those years when I was in my early teens.

It was the same with the cast. Mike Epps could wear real vintage. For Craig, I had to build everything because he’s a bigger guy. Those big sizes just don’t exist in vintage collections. I’d take ideas that I saw on album covers. One thing that was popular was the big dog-eared collars. It was really popular in R’n’B, and they were seen in every singing group. The Four Tops, and Earth, Wind and Fire all had the dog-ear, those long, rounded, point-ear collars. I got those made for him.

He came to us at the very last minute, so we were rushing around. I had every tailor that I knew in Los Angeles making something for us.

When you’re watching the movie, you really get the sense of the naturalness of the actors in those clothes. And that’s what I was going to ask you: if you were inspired by the album covers or bands?

BT Express. Oh my God! They had the best clothes.

You’re dealing with the transition of a character as he goes from Rudy to Dolemite. How do you imagine that transition?

I have done six movies with Eddie. It had been probably ten years since I’d last done a film with him. So, my imagination of what I wanted to put on him for the record store as Rudy Ray Moore was the guy who is making record store money. He’s in a t-shirt, jeans and maybe a layer of a leather jacket.

When I fitted Eddie, I started to realize that he’s a grown-ass man and that t-shirt with The Chi-Lites on the front may not really be telling the story of Rudy Ray Moore enough. In conversation with Eddie, we were talking about these leisure suits. The casual clothes of the 70s were double knit polyester. It was high-waisted polyester pants. Sometimes, you could wear it with a t-shirt casually. It was the look of an everyday guy.

He suggested we wear leisure suits as Rudy Ray Moore to tell the story that this was someone who had other successes. When you meet someone like that, you see remnants of their past life. You see remans of the story because we don’t throw our clothes away. He’s working at a record store and still trying to push his record. He’s trying to reinvent himself. He’s someone who really believes in himself.

When we finally see him leave the record store and he’s trolling down the street, people know him. He slaps somebody a five. He actually has a stroll and a personality in the community that people recognize. I think that gives him a little more status. I thought that was a good way to show Rudy Ray Moore, so you see him a lot with the printed shirts and it’s all casual, but the clothes look like they belong to another life.

Let’s talk about some of the outfits. Let’s start with the rose outfit 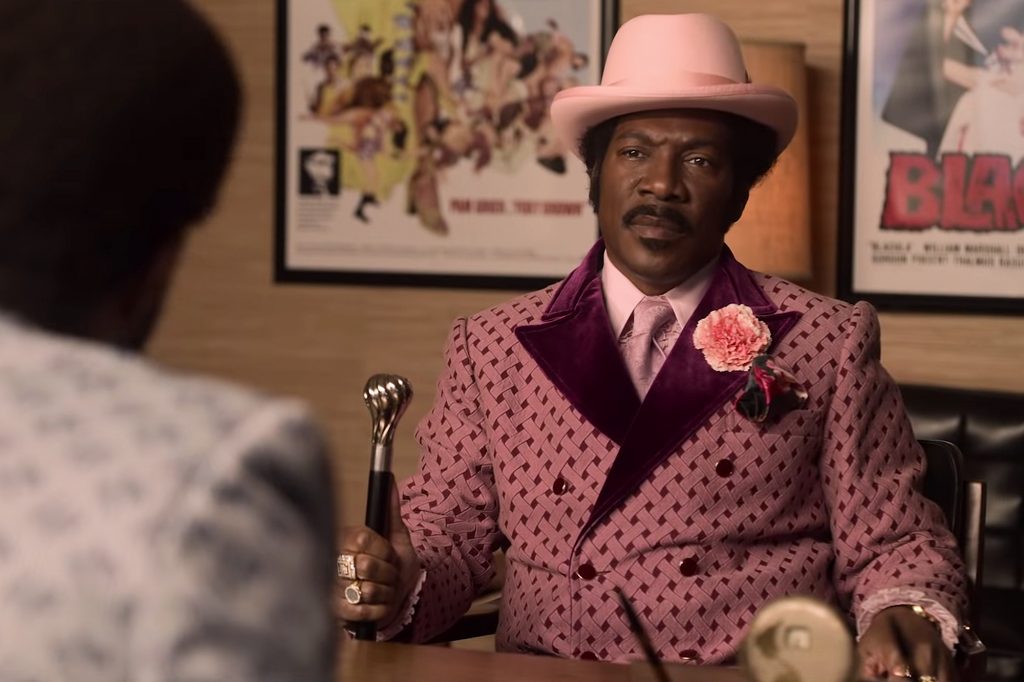 He’s dressed to impress. Although his stage character is Dolemite and that’s how Dolemite dresses. When he’s trying to impress, he puts on the Dolemite look. What I observed about the real Rudy Ray Moore when he was playing Dolemite, he did certain things. He’d put a rose appliqué on his lapel. He made this costume that had this pimp flair that was a little bit in your face and a little bit over the top. There were so many outfits that I wanted to do, but because we were shooting the making of the first movie, Eddie didn’t want to include too many things of his later movies. He felt that would be confusing for the Dolemite fans so I made some things up that didn’t exist. For the most part, everything came out of Human Tornado.

Strawberry pie! I love it. I’m going to watch Dolemite again and if I’m with an audience and I start laughing, no one is going to get it.

The cream suit has little stripe accents. Let’s talk about this.

Again for that, we looked at outfits that Rudy Ray Moore had. It was astounding how he had his own style. That style, the tailored was the look of the wealthy street dandy. You had to go to a tailor and it was all about expression. Rudy was someone who totally believed in himself and his brand. He was someone who believed in his entertainer style. That look, I think represented Dolemite in his perfect scenario. It’s patchwork all over the place. The back is solid. The front is pinstriped. There’s velvet on the cuff. There’s a tuxedo shirt with a necktie. He’s expressing himself totally unique from everyone else, and I liked that about that look when I saw photos of Rudy Ray Moore wearing it and so I mimicked it completely.

Da’Vine’s outfits are stunning. What I loved was her transformation too, but also how you dressed her.

For me, I have seen throughout the years, and it’s a designer’s choice, I’ve seen the full-figured girl get short-changed. I’ve always seen the full-figured girl getting a kaftan. I think it’s because we’re in a culture where everything is designed for a very small-figured woman. When you’re given the curves you don’t know which way to go because it’s an aesthetic that takes a lot more work than it does on a smaller figure.

For Da’Vine, I felt she was someone who Rudy Ray Moore chose to be his ingenue in his films. She was a madam. She was a boss lady, and she was the only female within the troops. He was doing all this custom work on his clothes, so why wouldn’t she have the same resource? My feeling was to find my favorite vintage look and transfer them on to her.

I’d find the right fabrics that spoke to her coming out. For the Juke Joint, I found this nice vintage piece that had these nice pleated palazzo pants. I loved it. I thought what fun this it. I thought let’s remake this for Da’Vine. We went to a really good tailor, and we just fit it to her body. That I feel is really the bottom line that you can wear anything you want as long as you have it fit to your body.

I love that you didn’t cover her up and really showed off her look.

Not in some flowly butterfly kaftan. There was this long full-length or midi-length in velvet. It was big in the 70s. The maxi and the midi. That’s what girls wore. I remember my sister when she went to Northeastern. She had a long vest with palazzo pants and a revolutionary t-shirt.

'The Morning Show' is a Showcase for Jennifer Aniston