Predictions Friday – Just How White Are the Oscars Going to Be?

I was a little surprised that The Hollywood Reporter’s Netflix story asks whether there would be three Netflix nominees for Best Picture and not four. The world of punditry, blogging and film criticism is a bubble but it can’t possibly be that insular not to have noticed how well Dolemite Is My Name has landed. Of course, it’s true that it would have been helped by coming into the race with box office clout — like a $100 mil kind of clout, which it would have easily earned. No one else would make the movie so Netflix did, but it is the only one of the four that clearly isn’t going to benefit from the streamer’s profit model. The bloggers are hard core in the tank for The Irishman, Marriage Story, and The Two Popes but I can tell you, without singling anyone out, that Dolemite Is My Name is better than at least two of those.

The outright dismissal of the film by so many of those who cover the race is a little shocking, considering most are banking on it being in the Best Picture lineup. Oh sure, they continue to advocate/predict by cherry picking those they feel give them street cred.  They select a contender here or there to make sure their predictions aren’t 100% white.

If no film with an all black cast is selected this year it will break a strong and significant trend that has been in place since the ballot expanded. With a few exceptions, the expansion of the race and the invitation of new members to break up the “old white guy” contingent at the Academy has resulted in a definite shift. It also coincides with a strong wave of films by black filmmakers about black characters. Dolemite Is My Name is a culturally important film about the origins of hip-hop, with Moore’s patter now widely regarded as a catalyst for rap — but more than that, it’s about a resourceful entrepreneur of color who never accepted the barriers put up in front of him.

It’s a perfect film that hits its tone exactly right – it manages to deliver its hard hitting message without sounding preachy and honestly, if this film is in the race it would bring a gust of fresh air into the proceedings like no other.

Here’s the rather shamefully scant history of films nominated for Best Picture that had predominantly black casts:

And the handful of films nominated for Best Picture that had predominantly non-white casts:

And indeed, Parasite’s all but guaranteed inclusion means they’re “off the hook” because that means it’s not going to be a 100% lineup. The thing is, Dolemite doesn’t need to be guilt-predicted into the race because it’s easily one of the best films of the year. And yet, it’s way down on the list for most pundits.

Seriously, at Gold Derby right now it’s underneath Avengers: Endgame. (Gold Derby is currently predicting Awkwafina as their only person of color to be nominated.) I’ve already spoken to about five people who don’t have their heads plugged up the backside of Oscar punditry that call Dolemite Is My Name their favorite film of the year. That means all it is going to take is for 200 or 300 Academy members to do that and the film is in. With that big of a cast, with people like Spike Lee and Jamie Foxx championing Eddie Murphy and the film, with it being on Netflix now so everyone can see it, are you all 100% sure it’s not getting in because those three Netflix movies are “better”?

It is my hope that SAG voters shut down this argument. It is my hope that this isn’t a year where only the stories in the mix are about white people matter — Parasite not withstanding. And indeed there is another movie coming out with an all-black cast that people should pay attention to and that’s Queen & Slim. There is also Harriet. And Jordan Peele’s Us, which earned $178 million at the box office. And there is one of the most entertaining and thrilling movies of the year that doesn’t have the opportunity to come into the race with the box office success everyone knows it would have gotten and that’s Dolemite Is My Name. I’ve seen all four movies. I liked all four. I loved three of the four but only two of the four I think are worthy of a Best Picture nomination.

Probably you all out there dismissing Dolemite Is My Name will be right. Probably you will circle back to remind me and mock me and laugh about how absurd it ever was to see this movie as an Oscar contender. You can do that and it might make you feel good for about five seconds. But I can tell you this much – macro out from that joy you receive and think about what that really means.

This is a wide open race. The Oscars are fluid, not static. What happens around us changes how the consensus ultimately votes, what it votes for and why. People who pretend to know how it’s going to go right now are, not to be crude, talking out their ass.

We haven’t seen the shitstorms that will be forthcoming and there will be many. This is the season of screenings, where films are hand-delivered to Oscar voters with high-profile names introducing them to get people to come out and see them. If any high profile name likes a movie they are asked to host a screening and invite bloggers and influencers to attend. The old model was – a movie is released. Do people actually like it? Yes. Do critics like it? Yes. Then it has a chance to be nominated. But everything has changed and changed really fast and we’re living through an era where critics barely matter.

Somehow, through it all, the Oscars still matter. They are supposed to reflect high achievements in film by the members each selecting their number one favorite films. I have the small handful of films I think are the best of the year and believe me, Dolemite Is My Name is right at the top of that list. And it’s an easy call. And sure, I know we’re still talking about the Academy has having a very specific kind of taste. I’m betting that taste has evolved, if recent history is any indication.

The films that, so far, stand out in my mind and continue to resonate long after I’ve seen them this year and will likely make my top ten list also include:

I expect some of these will get in, but it’s probably not likely all will. That doesn’t mean they aren’t contenders. You can’t second judge voters until REAL PEOPLE see the films and watch how the votes go down. After all, everyone on Film Twitter underestimated Bohemian Rhapsody and overestimated A Star is Born last year — and I was skeptical about both of these takes – and yet, everyone still acted like they were right to be 100% confident. I was wrong about Black Panther and First Man, without a doubt, but both of those were evaluated in what is a fluid race, not a static one. 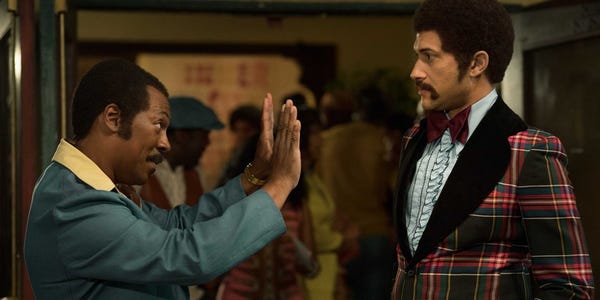 97% on Rotten Tomatoes with a 91% audience rating — it would have gotten an A+ CinemaScore if it had been given a regular release, and very likely a $100+ mil box office take. And it’s a movie about determined filmmakers making a movie.

What I’m saying here is that, at the very least, it is a CONTENDER.

Last year around this time I had Green Book in the number one spot to win and had 6 out the eventual 8 Best Picture contenders. I was missing Bohemian Rhapsody and Vice. I was still thinking First Man and If Beale Street Could Talk would get in. I very stupidly had Bradley Cooper and Lady Gaga winning in the acting categories too. You see, I do follow conventional wisdom some of the time.

Here are my current predictions, for what they’re worth — and yes, I’m giving voters the benefit of the doubt that they will be smart enough to know a good thing when they see it.

A couple of things to go by:

Sound Mixing
Ford v Ferrari
1917 (sight unseen)
Rocketman
Once Upon a Time in Hollywood
Star Wars: The Rise of Skywalker

Sound Editing
Ford v Ferrari
1917 (sight unseen)
Rocketman
Once Upon a Time in Hollywood
Star Wars: The Rise of Skywalker

And that is all she wrote, for now, which is more than enough.

Lorene Scafaria on the Best Birthday Present 'Hustlers' Gave Her