The great Robert De Niro will be honored with a Lifetime Achievement Award at the SAG Awards this year. Would you believe that this actor has never won a SAG award? I can’t believe it. The SAG Awards haven’t been around as long as De Niro has been acting but still – arguably one of the greatest living actors has never won an award with them.

Does that help or hurt his chances to win this year? I don’t know, but it’s one very public way of reminding people that he has never won one. 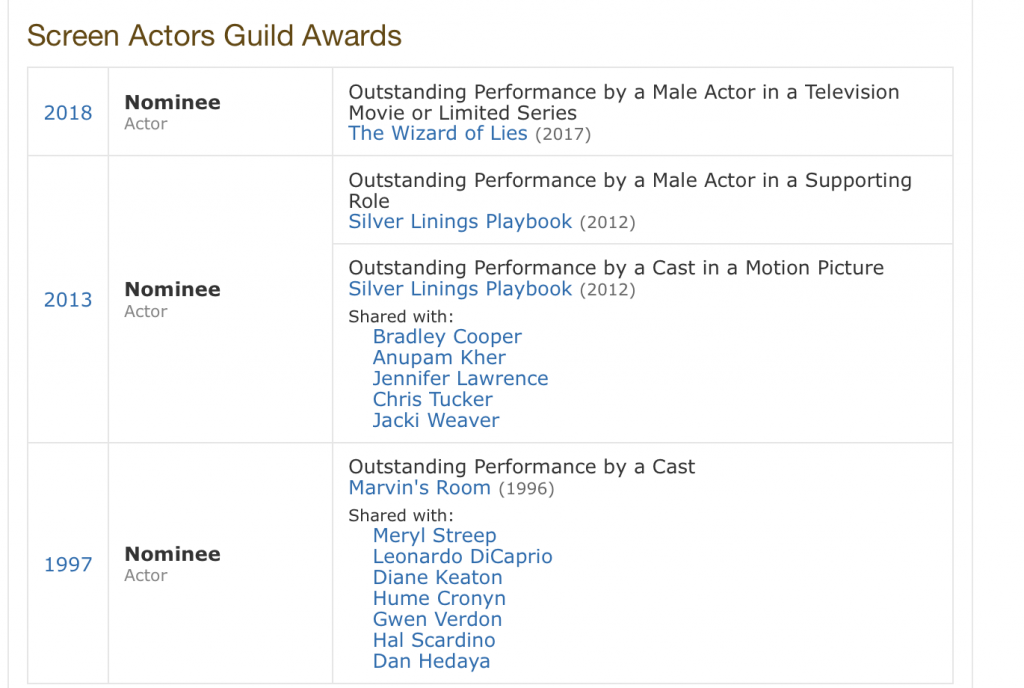 The SAG Life Achievement Award is given annually to an actor who fosters the “finest ideals of the acting profession.” De Niro will add the award to his extraordinary catalog of preeminent industry and public honors, which includes two Academy Awards®, a Golden Globe® Award, the Cecil B. DeMille Award®, a Silver Berlin Bear, a Kennedy Center Honor, a Presidential Medal of Freedom, a GLADD Excellence in Media Award and the Film Society of Lincoln Center’s Chaplin Award.  He was also awarded an honorary Doctor of Fine Arts degree from Brown University.

“Robert De Niro is an actor of extraordinary depth and ability. The characters he creates captivate our imaginations. From the smoldering inferno of young Vito Corleone to the raging bull Jake Lamotta and everybody’s grandpa Ben Whittaker, he continues to touch our hearts and open our minds to new and exciting worlds of understanding and emotion,” said Gabrielle Carteris, President of SAG-AFTRA.  “It is my great privilege to announce that SAG-AFTRA’s highest honor will be presented to one of the most singular talents of our generation, Robert De Niro.”

“I have been a member of this union for over 50 years. It’s an honor to receive this award from SAG-AFTRA,” says De Niro.

Frontrunners and Their Challengers - and the Illusion of "Buzz"