August 25th, 1970 – the night that Elton John stepped on stage at The Troubadour and immediately skyrocketed into rock and roll stardom. Although that historic night was nearly 50 years ago, it was recreated for modern audiences in the breakout hit Rocketman. Performing for the first time in the United States, Elton transforms from a petrified young man into the confident superstar we’ve come to expect as Taron Egerton plays him performing “Crocodile Rock.”

Awards Daily had the opportunity to speak with three members of the sound team that crafted those moments between reality and fantasy and turned them into one of the most spellbinding films of the year. Danny Sheehan (supervising sound editor), Matt Collinge (SSE and re-recording mixer), and Mike Prestwood Smith (re-recording mixer) detailed how they created the soundscape of Rocketman, pinpointing the vocals of Taron Egerton, and highlighting the music that we all know and love.

Blending The Worlds of Fantasy and Reality

One of the reasons Rocketman and the story of Elton John stood out in a sea of music biopics is the way the film was able to use his music to transport audiences into a completely fantastical realm whenever he took the stage. That idea is represented perfectly in Danny Sheehan’s favorite scene of the film, the titular sequence itself: “After we see him take all of these pills, we dive into this fantastical world where we find him [Elton John] underwater singing the song with a younger version of himself and from there the scene morphs into him performing the song in a stadium of 80,000 people. Then it jumps right back into fantasy with us utilizing the music and special effects as he rockets into space.”

All three men emphasized that one of their most important goals throughout the film was to ensure that the two worlds felt integrated without the audience ever feeling like they were being pushed from one world to the next. As Oscar nominee Mike Prestwood Smith put it, the first way to achieve that was zeroing in on Taron’s voice: “A large part of all of this was grounding Taron’s vocals and performance to make sure the audience felt like everything was happening in front of their eyes even though we drew from many different recordings including live, pre-, and post-production. Accomplishing all of that then made it easier to jump between fantasy and reality seamlessly so that the audience never felt a shift.”

Supervising sound editor and re-recording mixer Matt Collinge emphasized the need for everyone watching to feel as if Taron was right there telling the story live in front of them, whether in the theater or at home in their living room as opposed to the feeling of a detached pop video.

Crafting The Soundscape of The Troubadour

To capture John performing for the first time in front of American audiences, the creative team behind Rocketman knew that it was going to be a special moment for the film. As he performs “Crocodile Rock,” the audience watches as John transforms from nervous wreck to one of the most celebrated musicians in modern history, literally sweeping everyone off their feet.

In fact, the scene stands out to Mike Prestwood Smith as the one that perfectly encapsulates what they aimed to achieve throughout the film: “It had everything we were trying to do condensed into one scene. The moment begins with a very personal close-up with a close proximity microphone exuding this very literal feeling and then as soon as the music drops we dive into this explosion of fantasy and fun. That big shift personified what the movie does best, which is fantasy grounded in a real life experience and it treads the line perfectly.”

The scene begins with a petrified Elton, a surprising sight for anyone accustomed to the confident pop star we’ve come to love. There’s a realness element that Matt Collinge really wanted to highlight in the design, in everything from his shaky vocals to the intimidating sound of the audience to the intimate sounds of whispers and clanking glasses. 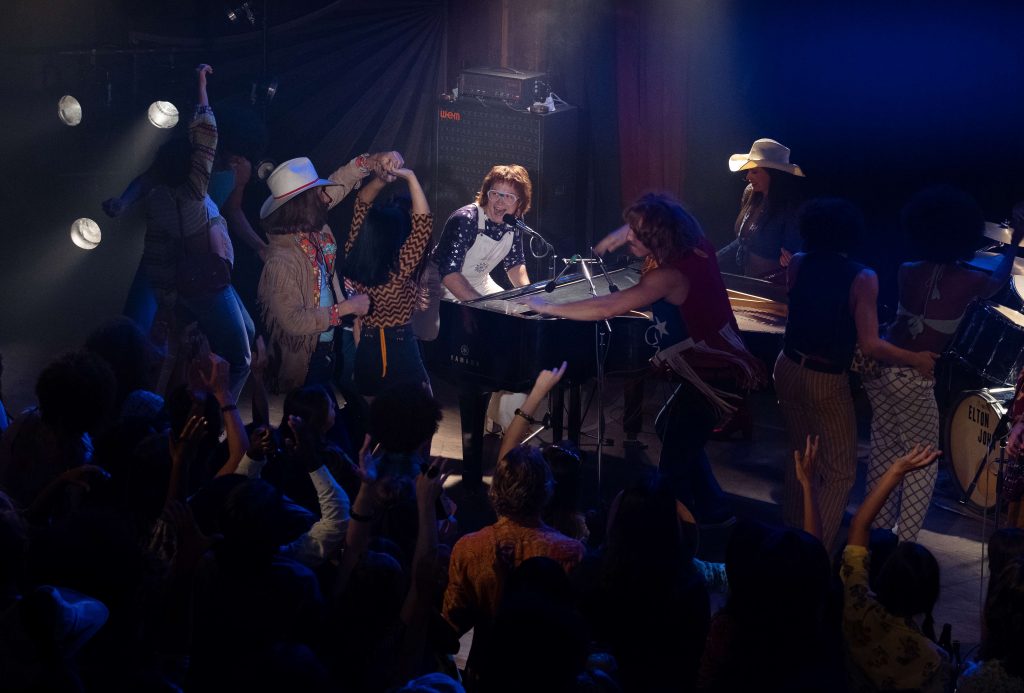 The intimate details at the beginning only helped the audience become sucked in as “Crocodile Rock” begins, and the audience is lifted off into another dimension. “It was a major shift both narratively and technically, and we realized that the more real it felt in the beginning, the more fantastical the other side would come out. We really aimed to zero in on the authenticity of that first half and let the second part do its job and sweep you away,” Collinge said.

For Smith, it was also important to single out another dichotomy prevalent in the scene that also pops up throughout the entire film: one of subjective and objective reality. “As the audience watches Elton walk out, everything is tilted down, from the musical effects to the sound design, including how he’s feeling and the way he is being received by the audience. Then we pan out to the audience and finally get to hear their own reactions of excitement and clapping. It’s the perfect example to show how he was constantly battling his own perceptions against actual reality.”

Rocketman is now available for viewing on Blu-Ray, 4K Ultra HD, and Digital.