Best Actor Is a Fluid Race, Despite Conflicting Narratives

There are, it appears to be, several schools of thought where Best Actor is concerned.

Theory #2 – No way, are you crazy? Nobody is beating Joaquin Phoenix. It’s just something you can sense. It’s TIME for this amazing, versatile, chameleon-like actor in a film that upended the superhero genre entirely and has soared past a billion bucks worldwide.

Theory #3 – What kind of crack are you smoking? It’s not going to be either of them. The Academy needs to FEEL something about the person they’re voting, and it isn’t going to be two people who are marginally likable. Rather, it’s going to be Jonathan Pryce for The Two Popes or Antonio Banderas for Pain and Glory — two performances that touch the heart and the heart leads.

Theory #4 – Eddie Murphy’s time has come. How long is Hollywood going to hold out on major wins for black actors? The last time a black actor won in lead was in 2006, 13 years ago – Forest Whitaker for Last King of Scotland. And it isn’t JUST that. He plays a heroic character (a heroic filmmaker, no less), though not quite to the level of Pryce. In his own time and that place, Rudy Ray Moore made a difference.

Theory #5 – Nah, man, this whole scene is WRONG. It isn’t going to be any of them. Robert De Niro has this thing LOCKED because he’s giving the performance of his career in The Irishman, and he’s only won once in lead (once in supporting). This might be his last shot at a major role this meaningful and profound.

Theory #6 – You are all WAY WAY WAY underestimating Ford v Ferrari. When that thing catches fire it will win many of the top categories.

Box office – Netflix faces a wee bit of a snag when it comes to measuring success vis-à-vis Best Actor. Only two really can walk in with a massive load — Joaquin Phoenix, and either Matt Damon or Christian Bale for Ford v. Ferrari. Netflix can’t boast box office, even though Eddie Murphy would plausibly have sold more tickets than any of their other contenders. Dolemite could have walked in the door with a $100 million take, but it didn’t have that chance. Neither will The Irishman, Marriage Story or The Two Popes. The Netflix model is not about box office. And while box office doesn’t necessarily matter when it comes to the Oscars anymore, there is no doubt that in a competitive year it might HELP distinguish one from the other. Without it, you have to rest on:

If you pack on some box office clout it makes it a little easier to see how Phoenix to stand apart. Far apart. One billion worldwide is shocking and impressive. No one can really compete with that. So either it will matter or it won’t. Now, people will get very haughty if you bring this up but in the Oscar race perception is everything. It is a testosterone thing. It rises if you think about a “winner” and drops if you think about a “loser.” It sounds like a wacky theory but it will serve you well in Oscar predicting. Phoenix is a testosterone riser because of that box office number, and it just puts a halo over his performance and him. Remember what our leader Bob Dylan says, people mostly want to be on the side that’s winning.

Both Gold Derby and the Gurus of Gold have Adam Driver in the number one spot. This is not my personal theory about how this going to go because regular people have not yet seen Marriage Story. Driver’s performance, while impressive, is not unequivocal. I guess the theory here is that the Academy is going to go ALL IN with Netflix, giving Irishman Best Picture and Driver Best Actor. Color me a wee bit cautious on that front. Put it this way: I will have to see it to believe it. Remember, there is no box office factored in with either of these movies so word of mouth is going to matter a lot – not blogger/critic word of mouth but by actual people out there in the world.

Keep an open mind is all I’m saying. I guess what perplexes me is why Phoenix isn’t the front runner at these two sites when he seems to me to be very nearly locked to win. Is it the worry that the film is too dark for Academy members? Heck, if you think Joker is dark, try The Lighthouse or Uncut Gems. If we’re talking dark. Joker is mild by comparison. I am only half-kidding there. Not only that, but he’s an international symbol at this point. It’s the biggest thing Phoenix has ever done. How does anyone top that?

So whether or not Driver wins depends on whether the regular people out there in the world are as in the tank for Marriage Story as the bloggers are. Maybe they will be, maybe they won’t be. I certainly don’t know how this is all going to turn out, but I guess I am a little surprised that there is such a strong consensus at this early stage. My own opinion is that if The Two Popes gets in for Best Picture there is very little chance Driver will beat Pryce. If it doesn’t and it’s just Marriage Story and The Irishman, then Driver has a slightly better chance. So if you’re predicting The Two Popes to be strong enough to get in for Best Picture, then you’d better be predicting Pryce because that is how that is going to go.

Here is Gurus of Gold: 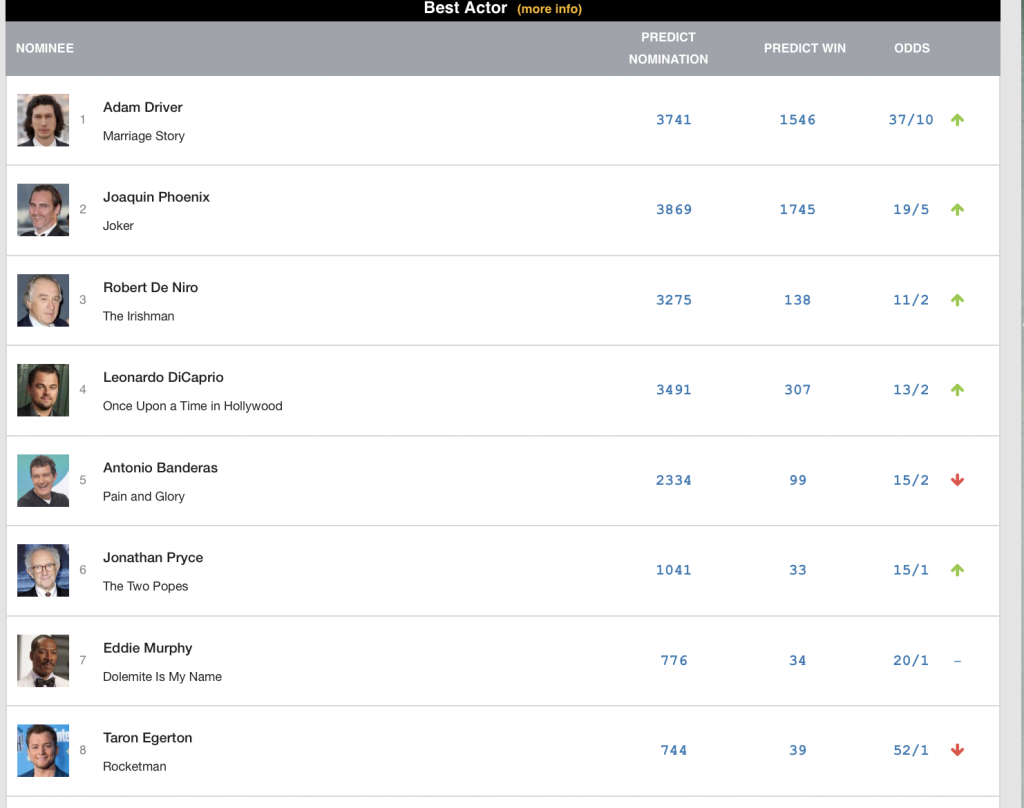 What all of this tells me and in looking at the charts is that there is a definite bubble where Oscar punditry is concerned, and I would be very skeptical of that bubble at this stage. No one really knows how it is going to go, but there is a very good chance it all switches around in a few weeks.

We just have to see how the films land, but keep an open mind. This is all very fluid and malleable.

by Sasha Stone
50
No Result
View All Result