by Shadan Larki
in ADTV, Interviews
1

Jake Monaco is a composer whose credits include Dumplin,’ Keeping Up with the Joneses, and Absolutely Fabulous: The Movie, among many others. Most recently, Monaco composed the music for the new Disney+ series, Forky Asks A Question. Each episode is a short film that follows Forky, the adorable spork from Toy Story 4, (voiced impeccably by Emmy winner Tony Hale), as he attempts to find answers to some of life’s fundamental questions, such as “What is a Friend?” and “What is Money?”

We spoke to Monaco about his career, working for Pixar, the movie moments he just can’t let go of, and so much more. Read our full conversation below:

Awards Daily: How did you get involved with Forky Asks a Question & Lamp Life?

And from there I had met a lot of the people involved in the Disney Animation and Pixar music world. In the beginning of 2016, I got a call from Tom MacDougall, who is the head of music for Disney Animation and Pixar, and he asked me to come in and help out a little bit on a short called Piper. I worked with the composer of Piper, Adrian Belew and that went very well! [Piper won the Academy Award for Best Animated Short Film in 2017].

Shortly after that, I started to do some promotional work with Pixar. And from there Forky [Asks a Question] came up and Lamp Life, and another SparkShort that’s coming up.

AD: How was this experience different from your work with Pixar in the past? 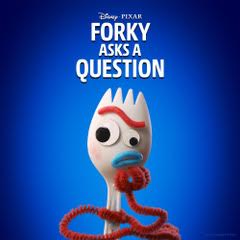 With Forky, it’s a very specific way of scoring. The director, Bob Peterson, wanted [the score] to just kind of sit in the background and offer a little bit of pace to the scenes. Forky is an amazing character and Tony Hale does such an incredible job with the voice acting, that really it doesn’t need a ton of support from the music (laughs).  [The music] can just help support the scenes a little bit, it doesn’t need to be commenting, necessarily, on any specific action.

And again, it was about developing a musical identity that can evolve throughout the course of the short, showing Bo Peep’s growth and self confidence and breaking out of her normal, which was being stuck on a lamp, to being in this amazing playground environment where she eventually runs into Woody.

AD: How much of the story are you given in advance to help you craft the music?

JM: For these, I wasn’t brought on too early; the story had already been established. They were about 60 or 70 percent into the animation, so it was just a matter of discussions about how the music can help support each of the stories.

AD: You’ve worked on projects of various sizes and budgets throughout your career. What is Pixar like as a studio? Are you given creative freedom? Or are they pretty strict about what they want?

JM: I feel like it’s a very healthy balance. They have a good concept of the story points they want to extenuate, but they’re very open to the freedom of, “what can I do to take what they are saying and create an original palette for that specific story?”

They are definitely very open, the director of Lamp life Valerie LaPointe, wanted to push for a 80s feel. She knew she wanted to go in that direction, but it was up to me [to decide] how I wanted to incorporate that into the overall concept of the score while maintaining a cohesive story arc from beginning to end.

AD: Did you draw any inspiration from the scores of the previous Toy Story films? Obviously, those Randy Newman scores are so iconic. Or did you start from scratch?

JM: They are incredibly iconic! What Randy Newman did so well in the quartet is be able to establish this sense of nostalgia and this familiar tone that a very wide audience can all relate to. It’s incredibly emotional. For me, I wanted to be able to start with a more familiar or nostalgic sound, but we had the freedom to then push some of those boundaries.

While I’m not actually invoking any thematic material from Randy’s score, I’m still pulling that sense of nostalgia and I tried to embrace that as much as I could in the original pieces written for Forky Asks a Question and Lamp Life.

AD: Did you feel any pressure stepping into the iconic Toy Story universe? What was that like?

But as we start to get into it and by the second or third playback, we are usually pretty honed in.  At that point some of the pressure starts to drop off. It becomes more fun to work in the minutia and detail work of each one of these, once the entire plot is laid out musically.

AD: With Forky, each episode is its own short film. How does that work when you’re scoring? Does the score for each episode work together or stand on its own?

JM: While there’s no recurring main theme for Forky himself throughout the shorts, the director (Peterson) wanted to evoke a small jazz band, and that had a good, familiar, and nostalgic feeling for Forky. The ensemble is pretty consistent throughout all 10 of the shorts, which actually makes for a very nice listening experience for a soundtrack, which will hopefully be released in the next month or so.

There are a few shorts that divert even further from that. There’s one episode called “What is Art?” It is really Renaissance-based so we got to really explore tons of different Renaissance instruments that were specific to that period. [We tried to] take those and maybe play them in a slightly more modern or contemporary way while still being able to evoke a similar feeling that the other shorts have had.

There’s one that goes into a L.A. noir type of vibe. There’s another episode that starts with a jazz feel and then diverts into this full orchestral space adventure.

There’s quite a variety from short to short of where the music ends up going to, but we usually start from the jazz ensemble.

AD: I’m curious, since you’ve done scores for both animated and live-action projects, is there a difference in how you approach the score?

JM: It really depends more on the age group or the demographic that the project is for. If we’re taking The Stinky & Dirty Show on Amazon Prime that is mainly for preschoolers, I’m definitely scoring that in a much different way than a Rated R hard comedy like Absolutely Fabulous, for instance. With the preschool show, I might lean more in the direction of being very specific with the music tying into the visuals on screen. When something is happening that we want the 3 to 6-year-old age demographic to really pick up on, there might be a certain theme that accompanies a question or problem that happens on screen. Whereas, with something like Absolutely Fabulous or any project geared toward a more mature audience, or even Forky and Lamp Life, I’m never aging that stuff down. I’m always trying to age it up so it’s not only the best that it can be for younger kids, but also for the adults and parents watching. I try to make longer story arcs musically with more connective tissue between the different subject matters so it feels like one, longer cohesive piece versus something for preschoolers that might be shorter.

AD: Can you tell me about the team you work with?

JM: I have a few people that work with me. Each person I feel definitely has their own strengths, and I rely on those strengths, just as much as they might rely on me for feedback. I don’t have a strong jazz background, per say so I might be able to score the piece or write the music. One of the guys who works with me has a very strong jazz background so he can teach me how to push [the piece] even more into the jazz realm. And each time we do that, I’m learning more from him, and he’s learning more from me about how to score and shape a piece of music.

AD: Shifting gears, when you were a kid did you have a toy like Forky that meant a lot to you?

JM: Oh, that is a good question! I loved Ghostbusters when I was in that 6 to 10 age range so I actually had a small Marshmallow Man fluffy plush toy. I still have it actually; it’s in my son’s room right now. I do remember that being with me for a lot of my childhood. My mom actually saved it, and when my husband and I had our son, that was one of the first things that she gave back to me so that I could pass it on.

AD: That’s so sweet! As you were saying, the Toy Story music is so iconic and Pixar is so iconic. There’s so much nostalgia that goes into those movies. Can you talk about what Pixar has meant to you in your own life?  Is there a moment or cinematic experience that stands out to you?

JM: WALL–E, specifically. That movie is just wonderful. The visuals. Thomas Newman’s score is unbelievable. The scene where WALL-E and EVE are dancing in space is just something that sticks with me. My husband and I actually used that piece of music (“Define Dancing”) in our wedding.

JM: It meant so much to us. That one scene just sticks with me. And there are so many little things like that [from Pixar movies] that I retain. I think that’s what Pixar does so well, everyone can find something they can relate to their own lives, and something that they hold on to, that is, in turn very special to them.

AD:  Each Forky Asks a Question short focuses on a big life question Forky has, what’s one question you’d like to see them tackle?

AD: If you had your own episode where you got to explore one of life’s big questions, what would it be? What great mystery would you dive into if you had the opportunity?

JM: (Laughs). I guess the big question would be, are we alone out here?

AD: Great choice! Before I let you go, is there anything else you wanted to discuss?

JM: Saks Fifth Avenue is having their big, window display reveal spectacular on Monday, November 25. And it’s all based on Frozen II. I was very fortunate to be involved with a lot of the arrangements that are done. Not only for the live show opening on the 25th of November, but also for the light show that will be running every evening from the 25th all the way into January. It’s really spectacular; if you find yourself in New York City, I highly recommend it.

AD: And what are you working on now? Is there anything you’re allowed to talk about?

JM: I am finishing up a short for the SparksShort program at Pixar, which I’m hoping will be announced shortly, but you can look for that in the spring.

AD: Perfect! Thank you so much for your time! This was a blast.

JM: Thank you. I really appreciate it.

You can watch episodes of Forky Asks a Question right now on Disney+.  Lamp Life will hit Disney+ on January 17, 2020.