1917 Closes Out the Year with a Grand Slam

Although there is a review embargo in place until tomorrow, social media erupted with praise yesterday for Sam Mendes’ 1917 — raves that have now been backed up and repeated today as several screenings rolled out across the city for anyone who could score a ticket. There is much to say about this holy-shit mind-blower of a movie, but for now we’ll talk briefly about what a year it’s been, especially for actor-driven films and ensembles, and how it has been mostly relentless since Telluride.

There is something for everybody in this year’s Oscar race, depending on what you’re looking for. But just when you thought it was time for the major studios to pack it in, they come roaring back with guns blazing. Warner Bros. has Joker, Richard Jewell and Just Mercy, Fox has Ford v Ferrari, Fox Searchlight has Jojo Rabbit, Sony has Once Upon a Time in Hollywood and Bombshell, and now, Universal has 1917, Queen & Slim, and Us.

Then you add in the independents, with Neon and Parasite, A24 with Waves and Uncut Gems, Lionsgate’s with Knives Out. Then it’s the  hybrids – Netflix with FOUR in the race, The Irishman, Marriage Story, Dolemite Is My Name, and The Two Popes.

What a year for the Oscar race. We haven’s seen a year this packed in a while. Add to that, there is a much shorter season than usual. SAG voters are voting RIGHT NOW. The Golden Globe voting starts in two days. We are just a week or so away from the National Board of Review and the New York Film Critics announcing.

Once December starts, then it’s nonstop December festivities, as packed with awards voting as it’s ever been, and then in less than a week, from January 2 through January 7, Oscar voters mark their ballots.

To make matters worse, the PGA, the DGA, and the Oscar ballot deadlines are ALL on January 7. It’s complete insanity.

Here are a few factors to consider.

How has the trophy tally added up, in the two distinct Oscar eras of the 21st Century? 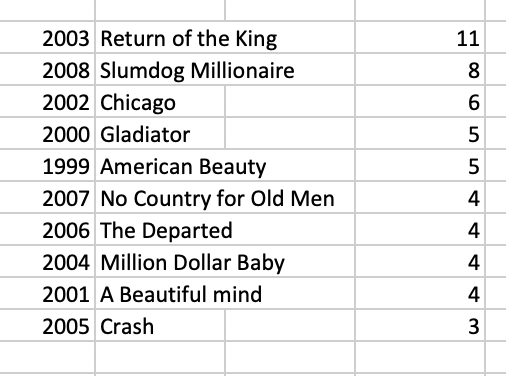 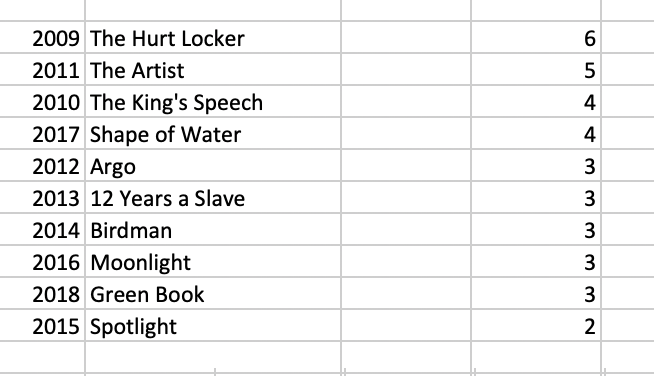 See the difference? Nowadays, films that win Best Picture, more often than not, win 2 of 3 big ones. Either Picture + Screenplay or Picture + Director – but rarely all three. The Hurt Locker remains the biggest winner with 6 but we’re not getting anywhere near the larger sweeps we sometimes saw with a film that hits it out of the park.

There are simply so many favorite movies admired by so many diverse voters, it splits up the vote all over the place, so that all the top movies that are nominated often win at least one Oscar (though it does rarely happen that a movie – like American Hustle – goes home empty handed).

Figuring out how to divide up the awards is the trick. Figuring out what most people will do — where they’ll lay it down and why —  that’s the trick.

The question before us now is — are sweeps still even possible? I’ve been waiting since 2009 to see one and every time one comes up, it slips at the final envelope and loses Best Picture, like:

These films with the big technical achievements come close to sweeping but then don’t hit the target with Screenplay and Best Picture, though two of those have won Best Director.

What these films lack, though, are a couple of things. Their scripts weren’t strong enough to win Best Picture. As good as they were, they were driven by their director and the crafts involved, not by the writing. The writing is key. When you get to Best Picture, if you aren’t winning on the first round of voting, that kicks in a recount and then being a movie like this hurts your chance to win Best Picture because it will almost always come down to the writing.

We’ve proven this many times over, how important screenplay is to the big win. Look at Spotlight – it won only two Oscars but one of them was Screenplay.

All five of this year’s Best Picture frontrunners have great writing, and aren’t just technical achievements:

1917 – We watch the hero’s journey unreel in real time. We see the reluctant call to save the troops from attack. We watch the struggle to get to the destination, then we see the transformation on the face of the film’s main character as he goes from a frightened, somewhat indifferent soldier to someone willing to risk his life to save many more lives. It is an astonishing film on every level. From the directing to the writing to the acting. It’s only drawback is that it is arriving late in the game and because it is a war movie many will be tempted to put it on the same shelf as some of the other recent movies that tread similar ground. That would be a mistake. The key to this movie is the way it’s written. Everything starts there. And where it started was with Krysty Wilson-Cairns’ pitch to tell a story of WWI in real time, then co-written by renowned visual-stylist director Sam Mendes to explore this idea of what would happen if you brought your camera onto the battlefield and saw the transformation of your protagonist evolve before your eyes. I mean, wow.

Once Upon a Time in Hollywood is pure Tarantino in both writing and directing. You can’t really separate them. His film closes out a revenge trilogy with the best of the three — the redemption comes not to the characters but to those who are watching, all of us who are reaching out for relief from the agony of carrying around such a horrific tragedy in our minds. Tarantino has made a personal film, even if many of us who watch it identify with the nostalgia of a time long gone. It is as good a script as Tarantino has ever written.

The Irishman brings with it the language of the book, I Heard You Paint Houses, but adds layers from the sharp mind of Steve Zaillian’s careful assembly and deconstruction of a dual life. A man who is one thing to his family, and another thing to the mob. A man who is lying as much to himself as he is to those closest to him. But there is another language brought to it and that is the language of Martin Scorsese’s version of the mob, which includes the language of Joe Pesci, Robert De Niro, and Al Pacino. These voices resonate powerfully in our heads and are folded inextricably into this complex narrative.

Jojo Rabbit is so packed full of funny lines it takes multiple viewings to get them all. It springs almost completely from the mind of its director Taika Waititi, even if it was a loose adaptation of the Christine Leunens book. Again, it all starts with the script and without the brilliant writing the actors could not walk that careful lines between comedy and horror and melancholy. The lines from Jojo Rabbit chase after the scene you just watched and they land well into the next scene. If some people find they can’t laugh at something so ridiculously surreal, what is there left to say? If you’re in the right groove, Jojo Rabbit is the one of the few films that makes you feel really good about the best of humanity by time it ends.  And that makes it one of the strongest contenders to win, especially if you’re looking at a Picture + Screenplay plus one other award kind of thing, which is the most common trend. If 1917 or Once Upon a Time in Hollywood or The Irishman wins? You’re looking at a much bigger haul.

Parasite wouldn’t be the first foreign language film to win Best Screenplay. Pedro Almodovar did it with Talk to Her. Bong Joon-Ho and Jin Won Han’s carefully constructed morality play about society’s unfair hierarchy and how people can literally be living right on top of each other and not know what kind of suffering endures in the hidden places. Parasite is thrilling to watch unfold, especially if you don’t know what’s going to happen. With careful and deliberate use of symbolism — a mystical stone to represent the promise of wealth, the mirror image parallels a two nuclear families — one living in wealth, one living in poverty.

The big question will be whether one movie can rise to dominate and make a clean sweep of the guilds. Or will they split, leaving us all to scramble in the last act, parsing the precedents to predict what might squeak through on a preferential vote. It could be any of these five, or any in the race.

Having now seen all of the films, I think the strongest for Best Picture right now would be:

I could be wrong but that’s how I see it going down for now.

I will not be surprised if any of these movies get traction and show up: