Colleen Atwood fashioned a career designing some of the most visually extravagant costumes of the last four decades. She’s had a strong creative partnership with Tim Burton going back as far as Edward Scissorhands. She had a strong hand in creating the fantastical worlds of franchises like Fantastic Beasts and Alice in Wonderland. She’s also the go to designer for some of the biggest musicals of recent years from Chicago to Sweeney Todd.

Now, four decades into her career, the four-time Academy Award winner is still challenging herself in unexpected ways. In between two Disney live-action remakes, she went in a completely different direction with Bombshell. Recreating the workplace clothing culture of one of the biggest news corporations in the world Atwood played a key role in transforming Charlize Theron into Megyn Kelly, Nicole Kidman into Gretchen Carlson, as well as dozens of other major media figures.

In preparation of the film’s premiere Atwood took the time to speak with Awards Daily on what inspired her to join the project and what it was like to recreate the wardrobes of some of the most well-known names in our modern era.

Awards Daily: You’re most well-known for your work in a variety of genres including fantasy adventures, international period dramas, and extravagant musicals. What inspired you to work on a film like Bombshell?

Colleen Atwood: I began working on Bombshell after I finished Dumbo which was a year-long epic in the costume sense. I came back to LA, and I heard about the script and immediately began pursuing it. I was won over by the idea of doing something that was like this and the script is so good and I really like Jay Roach’s work as a director. So I was really hoping they would consider me because like you said I am known for other things and whenever I want to branch out to something new that question is always there. So this was a different kind of challenge for me but one I completely embraced.

Covering a massive news organization like Fox I can only imagine what the research process was like with hundreds of hours of footage at your fingertips. How did you approach the research process? Were you looking for specific looks to recreate or was it about finding specific trends for inspiration?

There were aspects of both. We had specific footage that we needed to work into the movie that we mainly saw on screens and monitors like what Megyn Kelly wore in the debate or what Gretchen Carlson wore on her TV segments. With stuff like that I duplicated what we saw on screen and tried to match them as best I could.

For the moments that were new to our story that we couldn’t match to anything I took real images of the ladies and images of the news world and structured their looks based on that. With Megyn I used less bright colors and more minimal classic colors like navy, black, white, grey, and a touch of red to give her a Fox nod. With Gretchen’s clothes I used more vibrant colors, colors typical to news like bright pink and bright blue to convey a more feminine and less traditionally sophisticated style on camera. Gretchen also had a lot of clothes that were post Fox News in her story. I based them off of an interview I saw in her home in Connecticut. She was wearing a pale, cashmere-y outfit, suburban cashmere as I like to call it. I based her softer palette off of that interview. 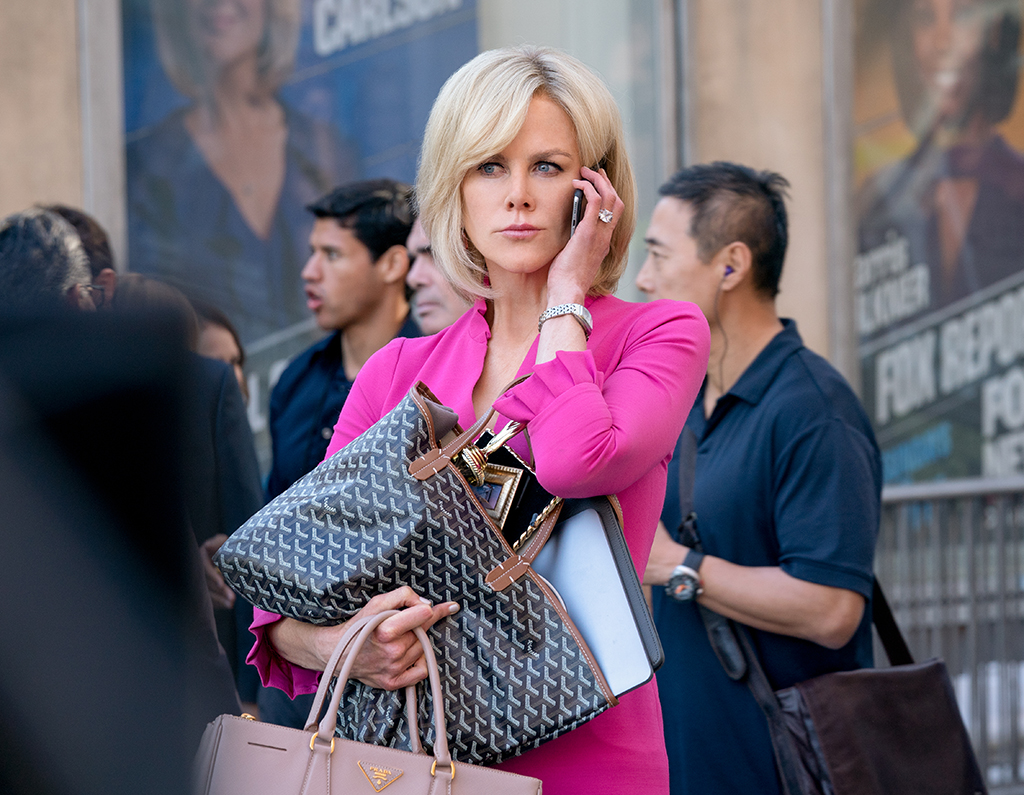 Margot’s character Kayla came from South Florida so I used a softer Florida vibe in the beginning with pale yellow and pale blue. As she got into New York and more into the world I used less soft fabrics and more sculptural fabrics with colors like soft pink, black, and white. As she became a news person I used more nude, black, and white. As she walks away from it all we decided that she would wear jeans as she packed everything up and said goodbye. That was her entire arc told through her clothing.

Throughout the film we also see explorations of many of the characters personal lives outside of the news bubble, particularly Megyn and Gretchen. For aspects of their lives that were less publicly documented how did you look for inspiration? Was it a matter of finding paparazzi photos or did you to keep to what was in the script?

I drew from a combination of different starting points. The red, white, and blue dress that Megyn Kelly wears at the beginning of the film was specific to the script so I created that look  based off of that era and the color blocks that were popular in the moment.

Some of her other looks were based off of photographs but sometimes it was ideas that came from my own head. I put Gretchen in a leather jacket because of a photo I saw when she was out in the field so I inserted that into the film but it was never attached to a specific moment. For Megyn and Gretchen especially I tried to draw inspiration from photographs and plug that into their day to day lives and then for news room scenes I took the general style of Fox News and expanded on that take as opposed to an exact match. What I drew from the news room included the bright colors, the Barbie doll silhouette, slightly body clinging clothes with a little bit of taste like a good girl with a naughty dress on and super high heels.

Megyn Kelly is a media figure that just about everyone in America has an opinion of and the film portrays her in a lot of ways that audiences might not be used to. Is there anything you tried to convey in the way she dressed that help people look at her in a different way?

I really wanted Megyn to be real in those scenes and I wanted to humanize her. She’s a known face with a husband, two kids, and a private home life. I dressed her in a modern casual way that I think someone of that income level and lifestyle would dress like. I know people like that in my own life. I gave her a feeling of comfort and some sort of approachability when she wasn’t at work. 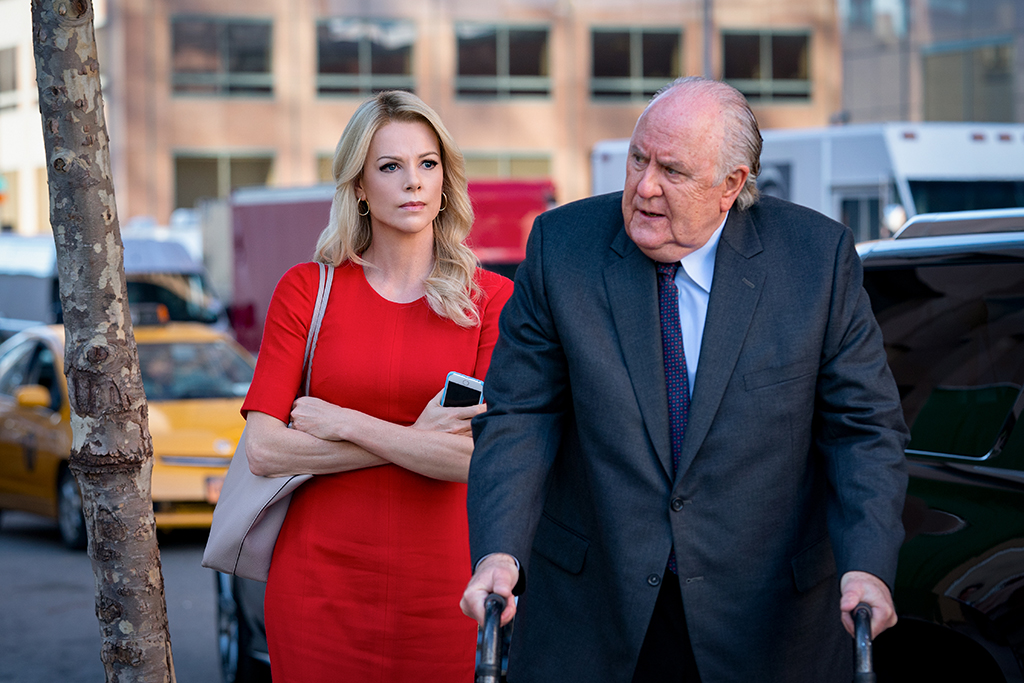 Bombshell features portrayals of just about every major Fox News figure including Sean Hannity and Jeanine Pirro. Was there anyone in particular that was a particular challenge to recreate the essence of?

The casting was so good and we had an extensive amount of research that it really helped the process. There were details that were difficult like trying to match an exact color or something like that but overall things went smoothly. Take Spencer Garrett as Sean Hannity for example, he walked in and nailed it. With John Lithgow as Roger Ailes I created a fat suit based on pictures of Roger. I built his loose fitting suit over that and it was an evolutionary process.

Then there were the people in the background of the newsroom. We created a wardrobe for all of them because we changed them four or five times a day because we were moving so quickly through the scenes. It was a revolving door of costume changes throughout the tight schedule and we were scrambling to keep up. It was hectic but focused.

A lot of the conversation around the film has been focused on the spot-on portrayals of these very famous media figures, with the exception of Margot Robbie’s Kayla Pospisil. How did you approach designing the wardrobe for her?

Kayla also wears one of the more memorable outfits of the film with a seemingly simple black dress that she wears to her first meeting with Roger in his office. Kayla’s wardrobe came from hanging out in that area of New York that the Fox News headquarters is and watching young people come in and out of work. I reached out to young girls I know that work in media and then some of it was based off of her origins from a small channel in Florida. She had a humility and simplicity that wasn’t refined or New York at all. She was softer and more girly and then she evolved from there. I took her from softer colors to harder colors. There was a lot of complexity to her. In terms of Kayla the movie is really interesting because in a lot of ways it’s about someone trying to figure out who they are and what they really want in the world and thinking they have it only to see it all crumble in front of them.

It was tricky because it needed to serve a purpose. It needed to feel a little awkward. We had to go through ten pairs of underpants and try to figure out which one is exactly right and we laughed along the way because it’s a pair of underwear you wouldn’t want anyone to see. For the scene I liked the imagery of white underwear with a black dress because it was graphic. We made the dress a little too tight so it was harder for her to pull up making it uncomfortable and then she [Margot] took it from there.

When you think back to everything you designed for the film is there one outfit or moment that sticks out in your mind?

It’s funny because I think of it more as not one thing but as these three iconic women. There was never one dress or moment that sticks out. The elevator scene was so indicative of my experience designing for these three women. It says it all.

There’s a pivotal scene in the film that takes place in the Fox wardrobe department that highlights how Roger’s toxic culture played out throughout the entire organization. Did you speak with anyone that worked in that department or anywhere similar?

I did not but I did see photographs of rooms like that and I did see footage of different offices and in the back of the room there would always be rails of four or five bright dresses and heels. Jay was very into that scene and it was important to show how a look is created as opposed to our naive belief that everyone just walks through the doors like that ready to go on air.

Without spoiling the ending of the film for our readers there’s a scene that raises the question of whether or not the culture of the studio changed post Roger Ailes. After going through the hours of footage what is your take on the culture of Fox post Roger?

I think that it opened the door for more looks but I think the brand of that is still very strong at that station.

Your other major projects this year included two live action remakes of Disney classics (Dumbo and Lady and the Tramp) as well as the upcoming The Little Mermaid. What has it been like taking on so many beloved classics and how did you go about putting your own twist on them to keep them fresh?

It really depends on how long ago your childhood was. I mean The Little Mermaid was 30 years ago, it’s shocking. For me before there were the cartoons there were the stories. I try to honor the icon that everyone remembers but I also try to revisit the origin of the story. That frees me and allows me to create a bigger world while also paying homage to the films they’re based on.