The award-winning producer talks to Awards Daily about working with Martin Scorsese and Netflix on the acclaimed film.

by Clarence Moye
in Interviews
1

Look back at films of the last twenty years and, more likely than not, you’ll see the name Jane Rosenthal repeating through some of the very best and biggest cinema offered. Wag the Dog. Meet the Parents. About a Boy. And this year alone Ava DuVernay’s When They See Us and Martin Scorsese’s The Irishman. Plus about 50+ other major titles and box office smashes all while serving as CEO and co-founder of Tribeca Enterprises, a global media company that includes the renown Tribeca Film Festival. 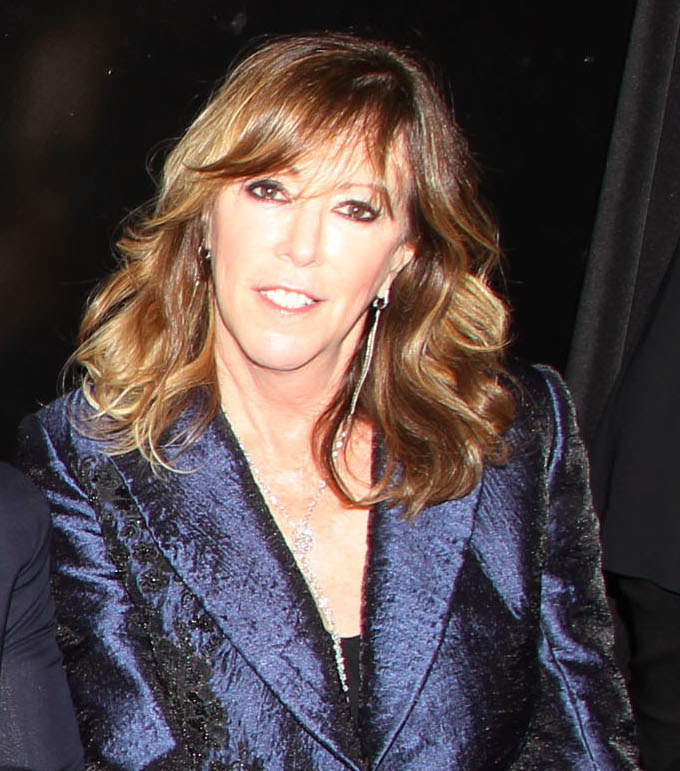 In honor of these contributions in both film and television, Rosenthal will receive the New York Women in Film & Television Career Impact Achievement Award on December 10. It’s an apt recognition for a woman who serves as an inspiration to rising female producers. It’s an award that holds significant meaning for Rosenthal.

“It always wonderful to be recognized by your peers,” Rosenthal gushed. “I feel like I have an awful lot left to do in my career, and I look forward to that. But I’m overwhelmed at how time flies when you’re having fun!”

Rosenthal certainly appears to be having fun this year with two major titles stirring awards buzz in both film and television circles. Earlier in the year, Rosenthal unveiled When They See Us, the result of a close partnership with director Ava DuVernay about New York’s Exonerated Five. The Netflix limited series received multiple Emmy wins including one for lead actor Jharrel Jerome. This fall, Rosenthal returned to Netflix for Martin Scorsese’s epic The Irishman, which many critics are hailing a late career masterpiece for the Oscar-winning director. The film puts Rosenthal and The Irishman team squarely in the conversation for multiple Oscar nominations. The film debuted in theaters earlier in November and on Netflix on November 27.

Here, Rosenthal talks about bringing The Irishman to Netflix with Scorsese and how Netflix changes the producing game for major cinema. While she remains cautiously optimistic about its eventual reception at the Academy Awards (she’s a bit superstitious), all early signs point to a warm welcome come January’s nominations.

Awards Daily: The numbers of women working behind the camera have increased but still have an extremely long way to go to achieve parity with men. As a female producer, how challenging has it been for you and what kinds of growth have you seen in this male-dominated industry?

Jane Rosenthal: It’s still challenging, although it definitely is changing to see more women behind the camera. You certainly look at the Annenberg statistics, and there are still very few women who are directing films – by films I’m putting limited series and the streaming world in there too. More women are directing, though you still don’t have enough women behind the camera. Certainly when we did When They See Us, Ava and I made a real choice to make sure we had a lot of women on the crew as well as people of color. That was very important for us.

But you also realize there has to be a mentorship or training. You have to nurture people and mentor people to come up in the business. That’s certainly something with my Tribeca hat we’ve tried to do in the Tribeca Film Institute. We have programs such as “Through Her Lens” which we’ve done with Chanel for the past five year to provide mentorship for women on all sides of the camera.

AD: That’s an amazing contribution for sure. Talking more specifically about The Irishman, other than working with the great Martin Scorsese, what compelled you to get involved with the film?

JR: I’ve been working with Bob (DeNiro) for about 30 years. I met Bob through Scorsese after working at Disney where I worked on The Color of Money and got to know Marty very well at that point. Next thing I know, I’m moving to New York to start Tribeca with Bob, working from his kitchen table at that point. It was around 2006 when we developed a project called The Winter of Frankie Machine (based on the novel by Don Winslow) which was about a hitman. It was a different kind of story that took place on the west coast. At that point, that’s when Marty got involved, and then Bob read as research material I Heard You Paint Houses. The more he got into that, he told Marty that was the film that we should make. We brought Steve Zaillian in to deliver the first draft of I Heard You Paint Houses around 2009. Then, it was a long process trying to get the film financed and working around Marty doing Wolf of Wall Street and finding a way to do the VFX correctly. That’s a brief version of the whole origin story.

AD: You talked about finding the right place for the film. The Irishman was shopped with traditional studios before landing at Netflix. Can you talk a little about the process and what the ultimate driver was in taking it to Netflix?

JR: It was originally developed at Paramount, which was also developing The Winter of Frankie Machine. They were interested in it, but I think the epic nature of the film scared people. How we were going to shoot it? Were we using digital effects? I was shocked at how many “No’s” we received because Scorsese and DeNiro have a brand in the mob movie genre. I thought it would have been much easier. Everybody wanted to meet on it, but we wouldn’t put the guys in the room unless we knew we were going to get a yes. So many were like “Oh I want to hear the vision.” Well, read the script. There’s the vision.

So, it got to the point where we were going to split rights with STX and do foreign versus domestic. The guys at STX were terrific, but it was just such a big movie and a difficult process. Later, we saw what Netflix did with Roma and that Netflix wanted to do in cinema. Ted (Sarandos) is a real cinephile, and I’ve gotten to know him over the years. We finally thought about talking to Netflix because they were so passionate about film and would support Marty’s vision 100%. And here we are.

AD: You’ve done a few things with Netflix now. What do you think the major differences are between Netflix and a traditional studio structure?

JR: They hire good people and let them do their jobs. They’re 100% supportive. It’s been a freeing experience. I’ve been in the studio / network system basically my whole life. If Netflix is going to do something, then they support it 100%. As our industry is changing, which is kind of glorious if you’re a storyteller, there’s a place for short films, a place for animated films, and a place for traditional films. With something like When They See Us, it was originally developed with Participant as a movie, and Ava thought it would fit more as a limited series. We went to Netflix with our vision, and there was a place for it. It wasn’t like we had to fit it into individual fifty-minute time slots and only cast X or Y person because of their TV Q.

AD: Will that change the way that you produce projects moving forward?

JR: Yes! I’m personally only wanting to be at Netflix. I’m very happy. Look, I think every story has the right place for it to be seen in the world. There are certain stories that make sense for broadcast television, certain stories that make sense for traditional theatrical distribution, but the industry is changing. I look back at the movies I’ve made, and I question if half of them would have been made as theatrical releases now. Certainly, Wag the Dog wouldn’t.

AD: Sure, and you look at Marty’s comments around Marvel films, and it makes sense that someone would look to work with an alternate company like Netflix. To someone making more traditional films, it doesn’t seem like studios are as interested in working with them as they once were.

JR: Read Brooks Barnes’s piece yesterday in The New York Times. There’s a wilting theatrical market, certainly for mid-level movies. Those are completely disappearing. Francis Ford Coppola, several years ago, someone asked him if he’d ever do a limited series, and he said he’d think about it. He looked at the fact at where some of these limited series are right now, and it is like independent film in the 1970s. We’re in a place right now where there’s so much content, so how do you differentiate it? Where are you telling some of the best stories? If the goal is to give artists like Scorsese a real voice and let him go make the movie he wants to make, then that’s certainly what Netflix did.

AD: Last question for you, as we head into the Oscar season, Netflix has a bevy of contenders including The Irishman. Since no streaming film has ever won Best Picture, are you at all apprehensive about voting members of the Academy holding a bias against streaming films?

JR: Certainly with all the talk that The Irishman is the largest theatrical experience that Netflix has had thus far… and the Academy was very supportive of Roma… we hope they will view this in the same way. I’m too superstitious to talk about it. (Laughs) Right now, we’re in a period where the audience has more choices than ever before about how, when, and where they want to watch something. So, being on the platform and being in theaters are not mutually exclusive. You can watch them in theaters. You can watch them at home. Then, you can watch them in theaters again. They’re not mutually exclusive, and it’s the changing pattern of the audiences. The other thing to point out is, here in New York, how many seats have we lost? Audiences want reclining seats. They want meal service, and I guess my attitude is if I’m reclining in my seat and eating a meal, then I hope I’m being transported somewhere magical!

The Irishman is now streaming on Netflix and is available in theaters nationwide.

Just How Many HBO Shows Will HFPA Nom: Our Golden Globes Drama Preview

by Sasha Stone
50
No Result
View All Result