Twenty-three years ago Marianne Jean-Baptiste broke into Hollywood with her Oscar nominated major debut in Mike Leigh’s Secrets & Lies. Since then she’s made a strong impression with a handful of major shows including a starring role on Without a Trace, the second season of Broadchurch, and a recent turn on Homecoming. This year she’s going back to her independent roots with Peter Strickland’s In Fabric, a heavily stylized horror film about a killer dress or as Jean-Baptiste describes it, a “chiller.”

Marianne Jean-Baptiste stars as Sheila, a recently divorced woman who seems to be underappreciated and sometimes downright dismissed by everyone in her life from her son and his intimidating girlfriend to her coworkers at the local bank. In an attempt to gain a sense of agency in her life Sheila signs up for a by-mail dating service. After treating herself to the perfect red dress her entire life begins to completely unravel in one of the most twisted, inventive films of the year.

Speaking with Awards Daily she discussed her excitement of jumping back into the world of independent film and what it was like working with Peter Strickland, one of the most inventive and uniquely voiced filmmakers working today.

Awards Daily: What was your immediate reaction when you read Peter Strickland’s script for the first time?

Marianne Jean-Baptiste: I thought that this was either going to be brilliant or well… it could go either way! It was intriguing enough and uniquely written enough for me to want to do it. I wanted to be in that madness!

AD: This was your first major role working in horror? What was that like?

MJB: I don’t think it’s horror. I wouldn’t categorize it that way. I would say it’s more of a chiller, it’s more unsettling. Do you know what I mean? A bit of Don’t Look Now, that type of vibe. There is a bit of chopping that happens in that film but that’s not what unsettles you. It’s the pay off. With our film it is so unsettling in places.

AD: Are you a big fan of the genre?

MJB: I love thrillers. I don’t like anything with chopping up but I do like to feel unsettled. A good psychological thriller or a chiller to me would be my preference opposed to stabbing and hacking. Don’t Look Now unsettled me to no end. The very first The Omen was a really good one. Frenzy. There’s quite a few out there especially in the 70s because they particularly got that style of something awful going on. Even Rosemary’s Baby. I wouldn’t say that was horror.

AD: What was it like working with Peter Strickland? Prior to In Fabric were you familiar with his work and creative style?

MJB: I had seen Berberian Sound Studio. It was great working with him. He is collaborative but he is very clear about what he wants and you just have to trust. I think people who work with Peter want to work with him because they’ve seen something that he’s done and liked the interesting things he is doing. There has to be a part of you that let’s go and just goes along with the process.

AD: I saw In Fabric for the first time about a year ago at AFI Fest and screened it for a second time recently. Your character Sheila is one that really stuck with me. I don’t know how to pinpoint it and I wanted to spend even more time with her. What drew you to her?

MJB: I hadn’t really played a character like that for a long long time. The emotional center of somebody who is simply feeling something and having an arc. I don’t want to take anything away from the other work that I’ve done but a lot of them have been more procedural and most of the emotional stuff has had to come from the actor rather than what was on the page. With Sheila a lot of the stuff was on the page. It was really rich for me and to play somebody so ordinary in the midst of all this madness was something that was really interesting. If I were watching the film and not in it and Sheila went into that department store and started talking to that sales assistant I’d have been screaming “get out of there!” But she is totally just in that world and doesn’t react to any of the bizarre instances that occur. 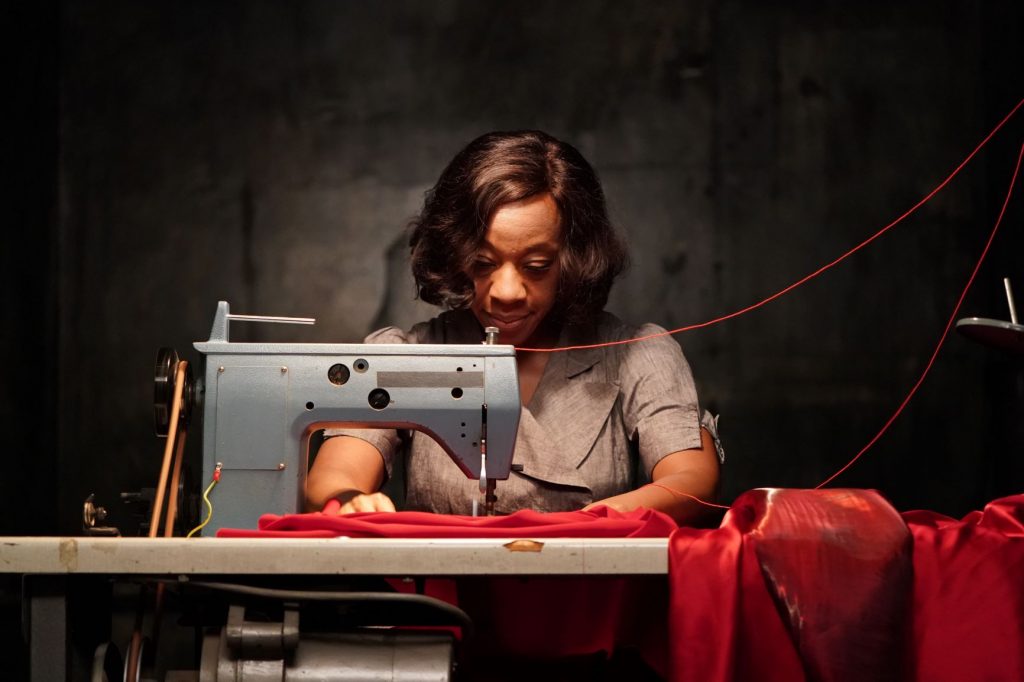 AD: Putting aside the supernatural elements of the film were you familiar with this sort of department store culture?

MJB: Definitely. People would dress up to go to these stores especially the fancy ones in the West End. If you weren’t from there you would dress up and go out to these stores. Many of them had places where you could have a nice lunch. I even worked in a department store. It still exists today, John Lewis. I worked in tracks and trimmings. The one in the film actually exists and has that bloody machine where you put the money in the thing and it shoots off somewhere. I had never seen anything like that in my life.

AD: Why do you think it was important to set the story in the early 90s?

MJB: We wanted it to be hardcore intimate so that she could write those letters. There was something about being able to write those letters, send a photo, and receive it all back or a message on your answering machine from these lonely hearts.

Throughout that entire process I kept trying to get him [director Peter Strickland] to tell me what time period it was and he wouldn’t answer. All that mattered was that it was before someone could send an email or had a bloody cellphone in their pocket. There was something about that that is quite magical.

AD: What did you make of the film’s obsession with clothing?

MJB: I found the film to be about our obsession with clothing. Our obsession with having to have new things and consumerism as a whole. I think what drew Peter to it was that he had been to a thrift store and found a pair of corduroy trousers that had a stain on them. He realized it was evidence of someone else existing in that garment and just exploring that and how much of us are in our clothes even though they’ve been washed a number of times. How they make us uniquely who we are. I always used to tease my kids because when children are small they’ll put on the most bizarre outfits. I remember one of them put on a bikini with Wellington boots and fairy wings and a woolen hat. I used to tell them getting dressed was their first artistic expression! There are so many aspects of clothing and what they mean to us that leads to so much ground for exploration.

AD: It’s been over 20 years since your breakout Oscar nomination for Secrets & Lies. Since then you’ve had a long career working in film, broadcast television, and recently streaming. At this point in your career are you looking for any type of role in particular?

MJB: At this point in my career I’m looking for work that’s interesting as a whole, not just the role but the entire piece. I just want stuff that’s a bit more challenging, interesting, a real exploration of people and their emotional and psychological states. This experience of working with Peter has reminded me of why I actually got involved in acting in the first place. It really was about the exploration of character. This feels like stating the obvious but there has to be a character to begin with but very often that’s not standard requirement.  I often see one sided characters that I have to create the other stuff to help it jump off the page.

Distributed by A24 ‘In Fabric’ will be in theaters this Friday, December 6th, and on demand beginning December 10th

‘AFI’ Announces Their Top 10 TV Shows of the Year