The film editor talks to Awards Daily about using the famed children's show as a blueprint for the rhythms of the film.

by Clarence Moye
in Interviews
1

When taking in Marielle Heller’s A Beautiful Day in the Neighborhood, the film editing isn’t necessarily the first thing that jumps out at you. You’re obsessed with the uncanny Tom Hanks performance. You become quickly absorbed in the father/son dynamics woven into the script. And you find yourself deeply entranced by a return to the world of your childhood – to Mister Rogers’ Neighborhood. Quite literally as the look and feel of the original low-budget sets are lovingly recreated for the film.

But what you don’t necessarily realize on first view is that all of those attention-grabbing aspects of the film are subtly tied together by the process of film editing. By the confident hand of editor Anne McCabe. This isn’t the kind of film that warrants flashy, smash-and-grab editing. Rather, it avoids calling attention to itself and forces a receptive audience to feel things they haven’t felt since childhood. 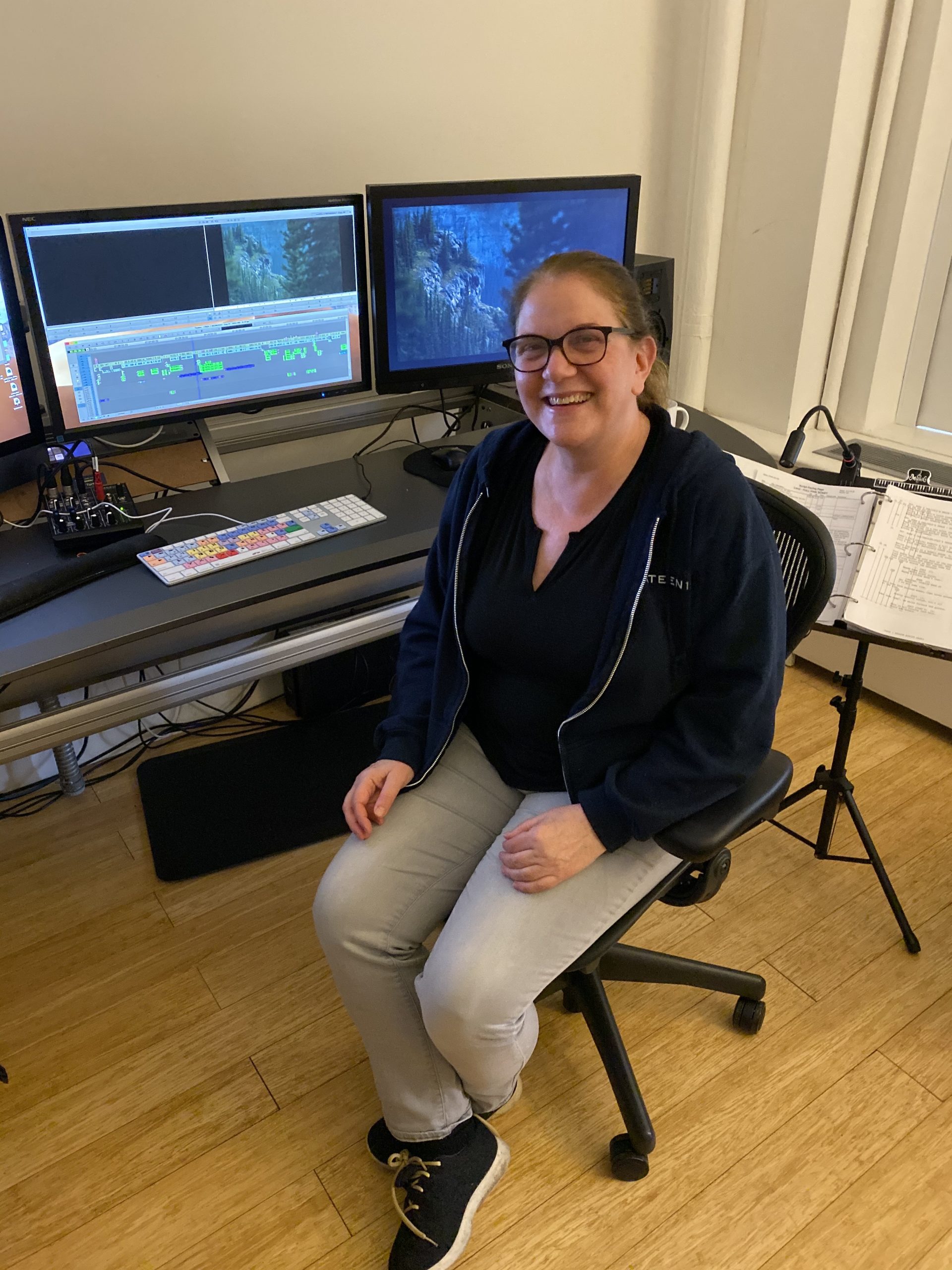 Credit McCabe with lovingly transporting all of us to that simpler place and time for a story about forgiveness and healing. Thanks to her, you feel the calming, healing presence of Fred Rogers in nearly every scene.

Which, by the way, isn’t her only prominent editor job in the current awards race lest you think slow-pacing is her only game. She’s also responsible for constructing the complex family dynamics of HBO’s critically acclaimed drama Succession. Never see a beautiful day in that neighborhood, do we?

Both high-profile projects put McCabe squarely in the awards conversation, but she has a perfect attitude about it all.

“Awards are strange,” McCabe admits. “I actually think it’s not very Mister Rogers-like to care too much about all of it, but of course, you do get sucked it!”

Awards Daily: Looking at A Beautiful Day in the Neighborhood, when you looked at approaching the film, did you have a connection to Mister Rogers already?

Anne McCabe: Yes, for sure. I watched him as I was growing up. As a kid, you don’t quite realize what he’s doing. Children trust him, but as you get older, you start to think that this guy’s hokey. It wasn’t until later when I was hired for this film and started researching and watching all the shows again, you realize all the complicated things he’s doing and the difficult topics he’s talking about. He brings up death and divorce and racism. There’s all this stuff that he’s doing that you don’t realize when you’re a kid.

AD: Yes, I really feel like we need him now more than ever before.

AMC: Oh my gosh yes. Absolutely. It was great to work on something that had so many positive messages. There are so many terrible things going on right now. To see somebody who was trying to do some good in the world and heal people. It was actually healing to work on it.

AD: In what way was it healing for you?

AMC: Marielle (Heller) and I are both parents. I have three kids. We have complicated things going on, and dealing with the terrible political situation we have going on right now, it was great to work on a movie where the person is talking about stillness and calmness and acceptance and forgiving of people’s differences. It was healing to look at and work on this movie.

I love comedy and watching all kinds of shows. But it’s kind of great to take some time and think about what you’re doing. To think about family relationship and what it’s like to have a difficult family member which I think so many people can relate to. Working on the film was quite healing.

AD: You mentioned looking back at the original shows for research on the film, and the rhythms of Mister Rogers influence the rhythms of the film. What do you think that does for an audience?

AMC: It’s tricky because the shows are kind of slow, and in the way they are edited, there’s a certain clunkiness to them. It’s not a super-slick show. There’s a handmade feel to it, which is something we wanted to capture. We wanted to honor the original show and be respectful to it. At the same time, it is a movie. You need to keep the pace up, and it can’t be six hours long. When we were cutting the parts of the original show, we tried to embrace that type of editing.

There’s one particular sequence I’m really proud of which is the scene about how to make a magazine, which also has another layer of nostalgia for print. My husband is a journalist, so the whole idea of going to print and making the magazine… It mimics a portion of the show where they would go and look at things like taking a trip to a bakery. When we cut that section, we were trying to mimic the style of how those educational trips went.

AD: One thing I found very daring about the film is the unexpected moment of silence in the middle. Tell me about working that out with Marielle.

AMC: Yes, that was very much a bold move, and I really give credit to Marielle Heller for coming up with this idea of having him stare at the camera and breaking the fourth wall. When you have a screening, you can really feel the room, how people are reacting to it. I’ve seen the movie like 4,000 times, and I still get choked up at that scene. You do start thinking about the people in your life. Mister Rogers is a gentle and loving person, but he also challenges people. Part of that scene is about challenging the audience to really think about things and look inside yourself. Tom Hanks looking into the camera is about looking inside yourself and learning what is important and who the important people in your life were.

AD: Yes, that is an emotionally connecting moment. I had a strong reaction to the film personally. For several hours after, I had to fight off moments of emotion myself. I need to explore that reaction, I think.

AMC: I think that’s great. I’m so glad you had that reaction. All of my family has seen the film, but for the actual premiere, I took my son who is 17. We’ve had our complicated moments, but it was really wonderful to watch it with him. It’s a movie about redefining masculinity and the ability to be vulnerable and acknowledging what it’s like to be a parent. It was great to watch it with him, to feel the emotion of the room, and to talk about it afterwards.

AD: This is your second time working with Marielle Heller after Can You Ever Forgive Me. How has your partnership evolved over that time?

AMC: I was so thrilled that she wanted to work with me again. She brought it up while we were working on Can You Ever Forgive Me and showed me the Tom Junod article which is incrediblely moving. It’s great to work with somebody again. A lot of ways, it’s easier the second time around because you already have a dialogue. You know how to speak to each other. There’s trust and ease with communication there. Plus, we can laugh and talk about our families too.

AD: Do you think it helps being a parent approaching material like this?

AMC: Definitely. I don’t think you have to be a parent, but I think that being a parent makes you very vulnerable. You have to look at things through a child’s eyes. Mister Rogers philosophy is to think of yourself as a child and how you would feel in this moment. As an editor, you need to have a sense of empathy, and certainly I had a ton of empathy for Loyd’s (Matthew Rhys) character. I think that helps with the cutting of the film.

AD: Closing question for you. You’ve also worked on HBO’s Succession. Is there a proclivity in your career to work on stories about difficult fathers?

AMC: (Laughs) Well, you know, King Lear is something Succession has a lot of relevance to. I think it’s more about great material, and there’s a lot of great material about difficult families. I come from a huge family – nine kids – where people were arguing and discussing and having lively talk. Those relationships create a lot of drama and, certainly at times, a lot of family drama. As much as I love my family, it certainly was a great training ground for cutting dialogue.

AD: So what is the biggest challenge about working on something like Succession?

AMC: Well, there’s an incredible amount of fantastic material. The writing and acting are really great. Our first cuts are always really long, and there’s so much great material that it’s hard to cut it down. It’s a lot of work, but it’s incredibly enjoyable to work on. My favorite thing to do is work on something that is a combination of drama and comedy.

A Beautiful Day in the Neighborhood is now playing in theaters nationwide.

by Sasha Stone
14
No Result
View All Result