The production designer led an on-set reconstruction of one of the most famous structures in the world.

When you watch The Two Popes in a theater or, starting today, on Netflix (which you absolutely should), you may think stars Jonathan Pryce and Anthony Hopkins marched right into the Vatican’s Sistine Chapel to film their scenes on location. This was absolutely not the case. No one is allowed to take pictures or video within the walls of the famed chapel. This obviously provided a challenge to a film primarily set within the Vatican itself. How do you film in the Sistine Chapel without actually being there?

Production designer Mark Tildesley solved that problem by bringing the Sistine Chapel to Cinecittà Studios in Rome with the help of intricate techniques, Vatican advisors, and in a few cases, the talented post-production team.

“I was so excited about reading the script that, at that time, I hadn’t thought I wouldn’t be able to film any of this in the Vatican. I genuinely didn’t know you couldn’t film anything in the Vatican. I suspected that you wouldn’t be able to film in the Sistine Chapel,” Tildesley confessed. “It became fairly evident quite quickly that it’s central to the theme of the film, and it needed to be done really well. It became something of an iconic piece for the two grand masters of the church discussing the future of the Catholic Church and how it should proceed.”

As the project progressed, director Fernando Meirelles and cinematographer César Charlone became increasingly focused on the Sistine Chapel. Their drive set the challenge for Tildesley and his production design team to provide a proper and realistic filming location. Not only did they have to create the structure of the chapel as a walk-on set for the actors, but Charlone’s lighting concepts – achieving a near-documentary style through high light levels – also mandated that the production team perfect even the tiniest details.

To achieve the look of the magnificent frescos on the wall, the team looked to a Milan-based company that practiced a technique perfect for the needs of the set. They printed the frescos on a tattoo to wallpaper onto the plater walls. The tattoo ink then seeped into the plaster, allowing for the appropriate texture and color of the images on the walls. Other images were hand painted on a reduced scale. The team then rendered the famed ceiling in post-production.

“We had to get it all ready in a very short amount of time because Fernando was very keen to work with Anthony and Jonathan in the space itself like a theater piece,” Tildesley explained. “He wanted to get them in the mood. In fact, we even lit candles and used incense to set the mood of the place.”

The actual scale of the set obviously didn’t match the scale of the real chapel. The production team wasn’t fully cleared to completely reproduce the room, so they took minute liberties here and there to make it their own. The curtains and drapes hold a different design, and the floor patterns are not exact reproductions of the actual Sistine Chapel floor. Also, the size of the room actually ended up being an inch bigger comparatively, providing Tildesley and his production team the opportunity to make their own boast. 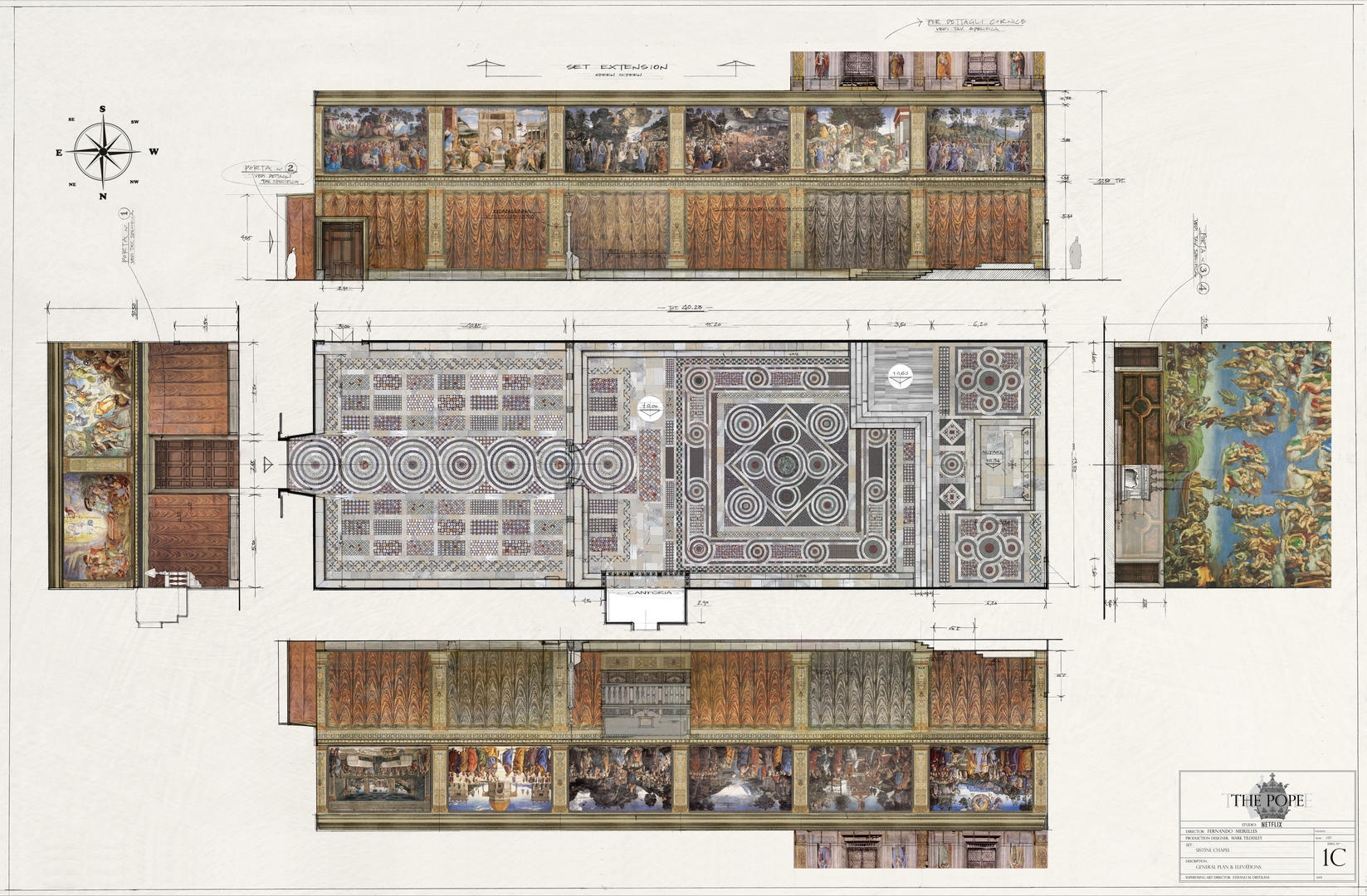 “We could say that we made the largest Sistine Chapel on the planet,” Tildesley laughed.

Outside of the chapel itself, Tildesley’s team was also responsible for the artifacts and additional accouterments required in the overall papal process. The beginning of the film focuses on the election of the new pope, a process that casual – non-cardinal – observes rarely witness. Tildesley worked with Vatican advisors to design replicas of items used in the election process, including the little wooden balls inscribed with each cardinals’ name. The sewing process documented as well as the burning of the papers and generation of the tell-tale smoke in the film are also near-identical to the actual process.

These exclusive and vividly rendered details all contributed to the extreme authenticity of the film without ever actually breaking Vatican policies.

“I love the way Fernando took what is quite a laborious piece of formal practice and made it really fun to watch,” Tildesley said.

And we love the way Mark Tildesley and his talented production team recreated the Vatican world for The Two Popes and its fascinating discourse of ideals and future of the Catholic Church.

The Two Popes is now streaming on Netflix.