When Disney/Pixar announced Toy Story 4 was moving into production, it felt like the world collectively rolled its eyes. After all, the general consensus was that the Toy Story series ended perfectly with the Oscar-winning Toy Story 3. Was there another story left to tell in the saga of Sheriff Woody and Buzz Lightyear?

Turns out, there was.

The key to returning to the Toy Story franchise resided within the character of Bo Beep (again voiced by Annie Potts). Bo was somewhat mysteriously excluded from Toy Story 3. Bringing her back into the fold with Toy Story 4 helped close Woody’s – and in turn the series’ – character arc. Plus, it gave the series a needed influx of a female-driven narrative. Bo Peep returned a changed toy, seemingly modeled as a road warrior in the wild akin to The Terminator‘s Linda Hamilton. Audiences and critics reacted in kind, giving the series the kind of acclaim that wouldn’t detract from the storied legacy of its predecessors.

The 2020 Animated Feature race has emerged as an unexpectedly competitive race. Disney holds a strong share in the presumed final five films thanks to Toy Story 4 and fall entry Frozen II, which didn’t exactly wow critics but still managed to capture the attention of a worldwide audience. Surprisingly, Frozen II fared very well at this year’s Annie nominations, leading the pack with 8 bids compared to 6 bids for Toy Story 4. On the surface, the animation race appears mostly competitive between these two films.

However, several other strong contenders have their camps as well, including Laika’s beloved Missing Link, Dreamworks’s How To Train Your Dragon: The Hidden World (presumably trying to avoid that threequel air by dropping the number), and a heavily buzzed French independent animated feature called I Lost My Body which is currently streaming on Netflix. This year, critics groups failed to single out one animated feature to award as they typically do. Most of the major contenders have received a “Best Animated Feature” prize thus far, illustrating the vast divide in the category. 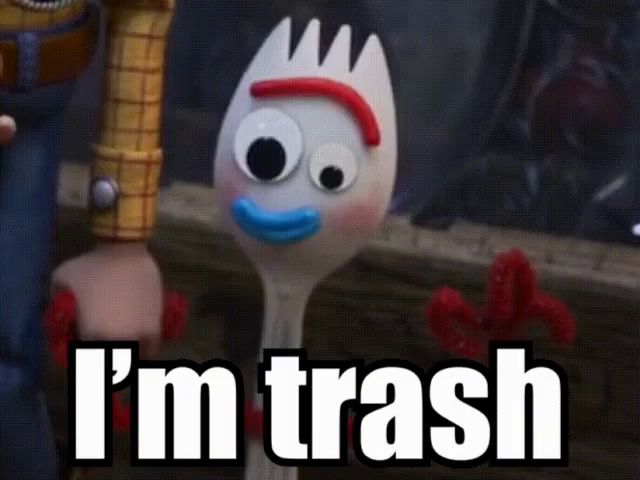 However, apart from the strengthened Bo Peep, Toy Story 4 has an ace up its sleeve that could propel it to the winner’s circle. Tony Hale (Veep) joined the cast with a bizarre, left-of-center character called Forky. The by-product of an anxious child’s imagination, Forky provides a sense of newness to the film. He’s a darkish character, one that spends a small chunk of the film fleeing others and jumping into trash cans. He also provided one of 2019’s best memes (“I’M TRASH”) in the process.

The character helped build the theme of Toy Story 4 as he paired with Woody for a road trip. His unintended advice of “Know who you are” and “Learn to let go” moved the film to an emotional conclusion as Woody said a final farewell to the characters audiences had grown to love over the series. The introduction of Forky helped avoid a stale narrative and gave audiences a reason to return to the property after what we’d all considered the to be the final end in Toy Story 3.

Forky also helps keep Toy Story 4 fresh in voter’s mind thanks to Disney’s new Disney+ streaming service. Forky Asks a Question drops on a weekly basis and provides Forky’s perspectives on commonplace things like love, friendship, time, money, and cheese, among others. It’s the kind of cross-platform branding at which Disney excels and keeps the character imagery fresh in voters’ minds.

Pixar has received 9 Oscars for Best Animated Feature since the inception of the category in 2001. Ironically, the studio was not the first to win the Animated Feature Oscar – that honor went to Dreamworks and Shrek. Since then, the following Disney/Pixar films have received Oscar wins:

Will Toy Story 4 add to their haul and make it number 10? Or will that have to wait until next year’s Soul?