Back in 2012, the DGA chose to hold off on announcing their nominees until after the Oscar nomination ballots were already in. As someone who had been covering the Oscar race carefully for many years, I figured this would probably create a bit of an upset somehow. Indeed, that turned out to be the year that DGA nominees Kathryn Bigelow (Zero Dark Thirty) and Ben Affleck (Argo) both missed out on Oscar nominations. Benh Zeitlin (Beasts of the Southern Wild) and Michael Haneke (Amour) got in instead. That year, the only two movies that were hitting all the Best Director markers were Steven Spielberg’s Lincoln and Ang Lee’s Life of Pi. After Affleck and Bigelow were shut out, and Bigelow’s film was hit with controversy, Affleck and his film Argo swept the season.

No one else seemed to believe that the absence of the DGA announcement as a guidepost for Oscar voters would cause much of a shakeup — but that year, it did.

This year, the Producers Guild, Directors Guild, and BAFTA all announced roughly the same day Oscar ballots were due. Though it’s true that some Academy members may have waited till late in the day to cast their votes, it’s certainly likely that thousands of ballots had already been returned before the three groups revealed their nominations. But does that mean we’ll have another situation like 2012? Back then, the five directors were very solid. The same five directors were all nominated for the Golden Globe, after all.

The other thing to note is that the BAFTA changed its voting procedures around 2012. We’ll have to have Ryan explain that for you. I know they changed it — I just don’t remember how. So I’ll just consider their Best Director influence only from 2012 until now, and it looks like this: 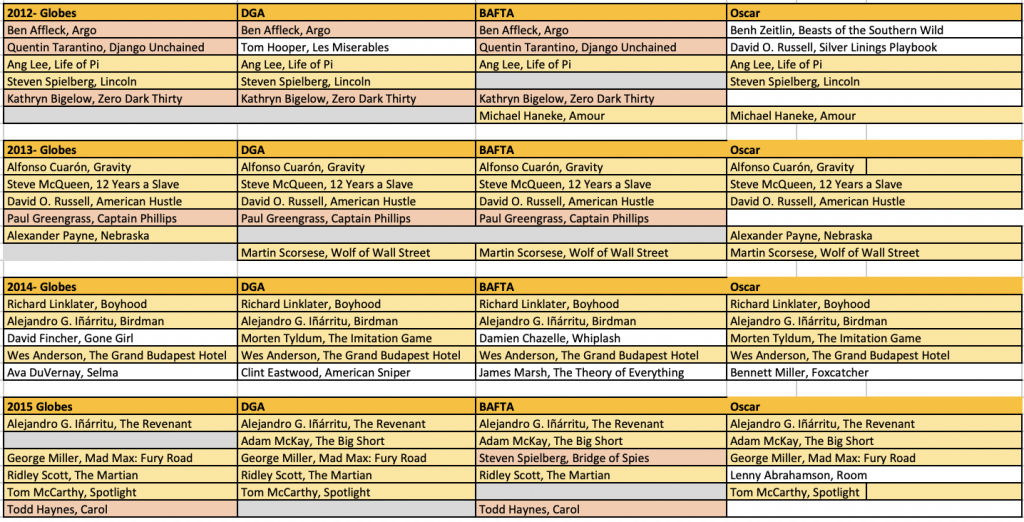 Granted, seven years is not a large sample size, but it’s notable how few directors turned up at the Oscars since 2012 without a prior appearance at one of the major precursors:

When I look at this list, I see two things. First, each of these films was anchored by a strong acting performance, two of which went on to become Oscar winners. What that tells us is that most voters watched these movies. It seems silly to reduce it down so bluntly, but I know a few directors and I know they don’t make time to watch a movie unless they have a good reason to watch it.

So when we speculate about that potentially wide-open fifth slot for Best Director, look for the outstanding performances. Not always, but most of the time.

The other thing I think about is that all these surprise outlier contenders were well-liked, well-respected directors — with the sole exception of the relatively unknown Behn Zeitlin.

The directors that seem most likely right now, based on the awards data so far, would be pretty easy to list:

But obviously we can’t have six. So the question is, which of these names drop off? Or will another name altogether slip in to surprise us?

Right now, the name that seems to be leaping forth is Greta Gerwig, who would then become the first female director ever nominated for a second Oscar, beating Kathryn Bigelow (whose Zero Dark Thirty was sideswiped).

The only thing that keeps me from predicting Gerwig is my feelings about the film itself. Perhaps you’ve heard — I think it’s an interesting deconstruction and reassembly of Little Women that didn’t quite work. I think she is incredibly talented and if she were to obtain the nomination, I wouldn’t mind that much. But I resist the notion that the best way to encourage her at this stage in her career is to throw awards at her (one of our clever Oscar wonks is welcome to list the directors who received Oscar nominations for their first two films. but we can imagine that it’s a rather exclusive club). Rather, I think the way to encourage her growth as a filmmaker is to grant her the respect that other directors usually get, so that she has something to work towards rather than assume she’s already arrived fully-formed at the pinnacle. But that’s just the mom in me talking.

I do sense that when it comes to critics, most of them only have eyes for Gerwig. For years, I have been championing women like Ava DuVernay for Selma, Dee Rees for Mudbound, Marielle Heller for Can You Ever Forgive Me, and this year, Melina Matsoukas for Queen & Slim. But what’s been the effect of those efforts? Nothing, nada, zip, niente. There’s been an almost willful disregard of promising female directors by the major critics and film industry at large for these enormously talented female directors. Why is it only Gerwig who gets the tiara? Will the same admiration translate to the guilds and the Academy as well? Of course, we know there are plenty of directors who likewise are the favorite of critics — heck, Paul Thomas Anderson could pluck three hairs off his head, drop them on a plate, film them rippling in a breeze, and he’d win the Los Angeles Film Critics prize for Best Director. They have their favorites, be they male or female. Does that kind of infatuation translate to our situation this year, is the question.

Many would argue with me about Little Women. Put another way, they would happily hammer the hell out of me. They do it every single day. But the problem with urging people to #VoteForWomen is that opinions become suspect if people believe a movie is being praised simply because a woman made it. When it’s been blatantly stated that the agenda is to push more women into the race, arguments in defense of specific women risk sounding dubious. I don’t hate Little Women. I think it’s about on the same level as Knives Out, or Bombshell, or Booksmart or any number of pleasant-enough films I thought were good — just not the very best of the year. It also comes with the same problem faced by A Star Is Born: it’s a remake of a remake of a remake, and no matter how good it is, it will always be part of a timeworn brand (for the record, I did not think A Star Is Born was worthy of its accolades either).

Speaking of Knives Out, I would not be surprised if the fifth nominee to crash the party is Rian Johnson, whose film is wildly successful and, like Gerwig, he happens to be one of the nicest people on the planet. Do I think his film is good enough to be named one of the five best directed films of the year? I do not. As good as it is, I felt its embedded message was too preachy, its lead female too saintly, and the whodunit part of it not as strong as the dozens of movies it seeks to emulate but fails to improve upon. I say this as a big fan of Brick and Looper.

Obviously, none of this parsing is up to me. It’s up to the 400 members of the directors branch.

Me, I still think that fifth slot goes either to Phillips (my hunch tells me it is Phillips) or else to Waititi, whose Jojo Rabbit has proven to be a guild darling. So I’m going to simply stick with the DGA five. I think my chances are better than risking a guess as to which director draws that fifth slot wild card. There is a good chance it’s Waititi — so why not?

Just for the heck of it, though, let’s look at what other names might turn up. Bear in mind that (with the sole exception of Foxcatcher) in the era of the expanded ballot, that fifth director wild card will have to come from a Best Picture nominee, or at least a nominee for Best International Film.

The Safdies for Uncut Gems
Terrence Malick, A Hidden Life

For me, though, it’s between Taika Waititi and Todd Phillips.

For reference, here are the charts for Globe/DGA/Oscar: 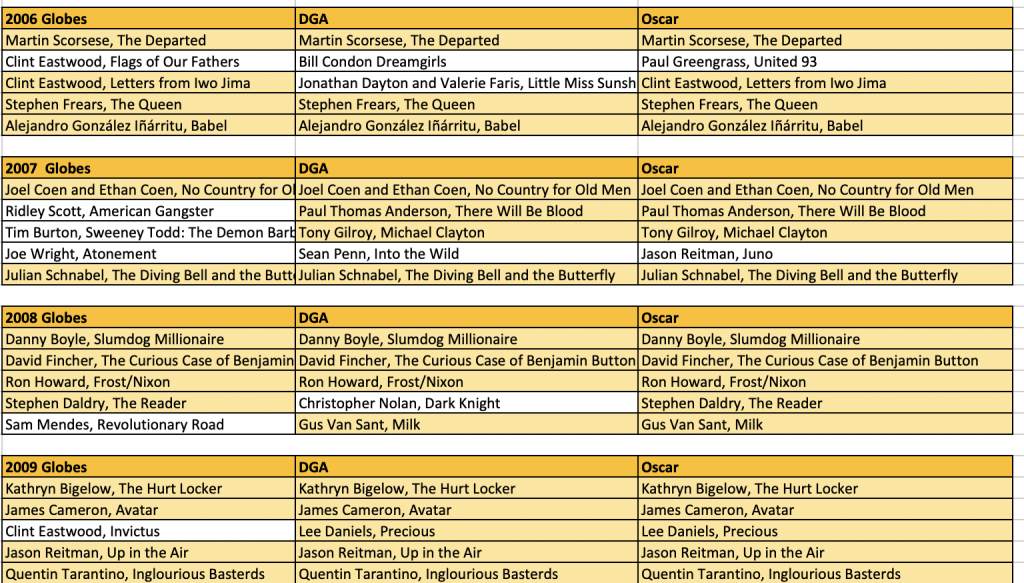