The actress discusses the Hulu series and what she has coming up next.

by Shadan Larki
in ADTV, Interviews
0

In Marvel’s Runaways, Clarissa Thibeaux played the shape-shifting alien, Xavin, helping the titular Runaways, a group of teens who venture away from home after discovering their parents are part of a team of supervillains. Xavin, a loyal and ultimately kind-hearted warrior, aids the group as they try to atone for their parents’ evil.

I spoke to Thibeaux about her work on the show, taking on a beloved Marvel character, and what she has coming up next.

Read our full conversation below:

Awards Daily: In Marvel’s Runaways, you play a shape-shifting alien. What was that like as an actress?

Clarissa Thibeaux: Well, for me it was actually quite easy because I’m the base. So every other actor has to play off of me. I get a lot of credit for just doing one part of the job. It was a really interesting experience because I’ve never played a shape-shifter before (laughs); getting to work with all of the different people that Xavin does shift into, and helping them get a sense for how I do what I do, so that they can do it too and have [the audience] think that it’s me doing what they are doing. . .It’s kind of like Inception, but it was a lot of fun.

AD: Did you have to teach each of your castmates about your mannerisms? Were they studying you? How did that work exactly?

CT: Yeah, kind of like a study. Each of my castmates had a different way of going about their job. Brittany [Ishibashi, who plays Tina Minoru] invited me to her home, and we talked for an hour and she really studied all the different things that I do. Whereas some other people just asked me questions on set before they were about to go on, had me just say their lines once or twice, and then they’d say them back to me. It was a really fun process, and it allowed me to have some really fun bonding moments with people who I might not have had one-on-one time with otherwise. 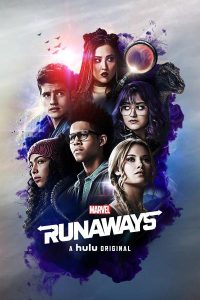 AD: Did you have any moments of self-awareness where you realized you had a mannerism or something you weren’t previously aware of?

CT: Yeah, there were times watching the show back, where people were playing me, and I was like, “Gosh, are my eyes always that wide open?” (Laughs) It’s actually a really fun exercise watching somebody imitate you, it doesn’t happen that often.

AD: I’d imagine it’s sort of like an out-of-body experience.

AD: You obviously played the character over the course of many episodes and three seasons. Did your approach change as you got deeper into the show?

CT: The first time anyone sees Xavin, I really hadn’t had time to do a bunch of research before we started filming. I was cast on a Monday, and I was filming that Wednesday.

CT: Yeah, it was really fast! I was already shooting episodes, and also trying to find time to read the comic, because I’d never read them, and do as much research as I can. So for Season 3, I felt like I had a better idea of everything, mainly due to the fans, honestly. Because after Season 2 came out, I was able to interact with the fans, and people actually knew I was on the show. Getting to see what [the fans] were saying, and seeing the fan art, and going and reading the comics. . .seeing that perspective really helped me get a better sense of why people love Xavin.

AD: That’s one thing I wanted to ask you about. Marvel is a brand, and it does come with such a massive fan base. What is it like entering into that world? Exciting? Panic-inducing?

CT: (Laughs) A combination of both?

Overall, it’s been wildly rewarding. So rewarding. The fans have been so knowledgeable and kind, and so sweet. And so talented, too. I mean, their artwork just blows me away. But it is a little terrifying, too. Because I know that the people who grew up reading the comics have such a clear vision of Xavin in their head. I wanted to make sure that what I was doing was staying true to the comics as much as I could, and just hoping that I was bringing the Xavin that they had in mind, reading the comics, to life.

AD: When you did read the comics, were there any changes you made in your approach to playing Xavin?

CT: Well, when I read the comics, two things really stood out to me. First, was that Xavin is very funny, there’s a lot of unintentional humor that comes about. And the blatant honesty. When I would see the potential for either of those things in the script for Season 3, I would try to lean into it, because I just know that those are some of the most memorable and funny parts of my character in the comic books. I wanted to make them memorable parts of the show, too.

AD: The show has, unfortunately, been canceled. What was your reaction to finding out and how do you feel about it?

Once it was confirmed that this was, in fact, the last season, it was sad. But I already had an idea that maybe that’s what was coming, so it wasn’t heartbreaking. I had prepared myself that this might be the last season, and it ended up being the last one. So ultimately, I just hope that this was a satisfying ending for everyone who watched the show, and loved the show, or anyone who might binge-watch the show in the future.

AD: That’s an interesting point. With binge-watching, shows have a much longer shelf-life and there are so many ways for people to discover the show later on, even after it ends.

CT: It’s actually really cool because as I’ll meet new people, and they ask me what show I was on, and I’ll say, “Marvel’s Runaways.” They’ll go, “Oh, I’ll binge it tonight.” It’s just so funny that people can do that now.

You can say, “Hey, there’s this show, and it’s already over, but go check it out.” And they can. And they can reignite the love for it that so many fans have had since the beginning. it’s a beautiful thing. I think it’s great.

AD: In preparation for this interview, I saw that you have a number of projects coming up. Can you talk about any of them?

CT: Yeah! The one that I can talk about because I helped write it, is RxR. That’s a project that I co-wrote with my good friend, Karisa Tate, and right now we’re in pre-production for it. We just locked a location and we are set to shoot in February. And that project is all about two women who form an unlikely friendship through a cancer support group.

So, not superheroes, but I think it’s a really touching and honest story about friendship and female friendship. That’s one that we’re super excited about and it’s going to be coming out sooner than some of my other projects. The rest I can’t talk about yet. (Laughs)

AD: I also noticed you had a number of non-acting credits: writing, producing, behind-the-scenes work. Is that something you’re interested in continuing to pursue in the future?

CT: I’m probably always going to be a writer and an actor. I was a stylist for a little while, I did a bunch of wardrobe work. I’ve been in L.A. for seven years, and there’s ups and downs. You’ll have a friend doing an indie project and they need a production assistant, so I’ll come on and be a P.A. I’m always open to doing almost anything if I can learn something in the process. So now my IMDb has a bunch of credits of me doing all kinds of stuff.

Hopefully, that won’t stop. I enjoy it, I enjoy being on set in any way.

AD: How does doing that work on set behind-the-scenes aid you as an actress?

CT: You know, there’s always something to learn. I think it’s important, at least for myself, to understand as much of the business as I can. If I have the opportunity to shadow a director or be a P.A., you make connections, you get to meet people, and you get to learn new things. I’ll help out a friend, and a couple months later they might have a role for me, or I might have something for them to do. It helps broaden your net in many ways.

AD: Absolutely. To tie it all back to Runaways, you’re coming off of this big project, what lessons did you learn that might carry on to indie projects or other future roles?

CT: Because this was the biggest project I’ve ever worked on, one of the things on The Runaways that I had not really experienced was that I was just an actor. I couldn’t move any boxes, I couldn’t help with lighting. In Marvel’s Runaways, I am an actor. And it’s best if I stay in that actor world because if I try to step out, I’m either taking someone’s job or I’m getting in the way.

AD: You have 23 good ones to choose from!

CT: Right off the top of my head, I really enjoyed Avengers: Endgame. I’m trying to think of what my favorite is. They are some of my favorite characters! I would love to have some kind of alien mash-up movie with characters from Guardians of the Galaxy and Captain Marvel. I think that would be so fun! It’s hard to choose!

AD: Before I let you go, is there anything else we haven’t discussed that you wanted to mention?

CT: I’m really looking forward to the future, and I’m so grateful I got to be part of such an amazing show and such a diverse show. It’s been a complete blessing!

All three seasons of Runaways are available to stream (and yes, binge-watch) on Hulu.

Shadan Larki is a contributor to Awards Daily TV. She lives in Houston, TX, works in digital marketing, and obsessively watches TV & Movies.