I must admit that ever since Emmy season wrapped in September, I’ve been struggling to find a new show that’s captured my attention. Something I absolutely love and want to tell everyone about. Until I caught up with Apple TV+’s Little America. Produced by Kumail Nanjiani and Emily V. Gordon, the eight-part anthology series is based on true stories, first featured in Epic Magazine, about immigrants living in America.

Little America is a joy to watch. It sucks you in, and by the end of the half-hour episodes, you are laughing, crying, and completely invested in the lives portrayed on screen. If you’ve been on the fence about adding Apple TV+ to what seems like an ever-expanding list of new streaming services, I don’t blame you. But Little America is worthy of your consideration.

I spoke to production designer Amy Williams about her work on Little America and how she was able to capture the audience by creating such distinct and authentic environments.

Read our conversation below:

Awards Daily: How much did you know about the true stories which the episodes were based on? Did have any idea of what the person’s real-life room looked like or house looked like? Or did you start from scratch?

Amy Williams:  Yeah, for my three episodes, [“The Manager” Episode 1, “The Cowboy” Episode 3, and “The Baker” Episode 5] there were articles from Epic Magazine that were written about these particular characters, and to a certain extent, the producers had direct contact information for them. My first episode, [“The Manager”], there was a lot of press already about Kabir, so I did a lot of research and we were able to connect with him directly. We were able to get photographs of the hotel lobby, and a lot of elements from the spelling bee he was in. 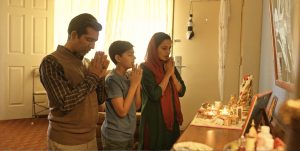 Some of these real-life people were more accessible than others. They were pretty generous about sharing anecdotes about what their spaces looked like, and what their home countries looked like. It was really cool, and getting to dive into their worlds, research and gather information, was really fun.

AD: One of the things that struck me when watching your work in Little America was that all the sets all looked so lived-in. You actually got the feeling that you were transported into somebody’s home, and into their life. How did you achieve that authenticity?

AW: Oh, thank you! It’s really nice when people notice that because we spend so much time trying to create an environment that is filmable, but also believable. Sometimes, the goal is to not look like it was designed even though everything is carefully placed to give it a very naturalistic feel.

We went through a lot of photography of real-life homes and immigrant décor. People live in real spaces and that’s what [producers] wanted to portray. 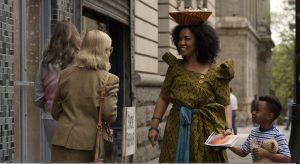 I think one of the greatest compliments that I got for the sets was from a woman from Uganda. She reached out to me on Instagram and said, “You brought me back to home. I thought for sure you guys shot that in Uganda.” But we just shot that in New Jersey.

AD: I love that! Your production design did remind me a lot of my childhood home as well. That blend of American culture and Persian pieces my parents brought with them.

AW: That’s what’s really beautiful about this show. It doesn’t just show that, “Oh these people have moved to America and forgotten their past”—it’s so much more complex and layered than that. You look at where people live regionally within the United States and what kind of stores they have access to, not just where they’re from. It was a really, really fun show to design because it’s so deeply personal and there are so many emotions involved in every story. It meant a lot to me.

AD: I’ve spoken to a number of production designers, and they all have methods and themes they like to go back to in their work. Are there any common threads that connect your designs?

AW: I think I definitely have composition and affinities for certain colors and patterns, but all my work starts from research and the environments in which these stories take place. That’s what drives the creatives, and a lot of that happens in the beginning while you are scouting for locations, and you’re not quite sure what you need yet, and all of that culminates while you’re in the creative process.

AD: You worked with a different director on each episode you did. And each episode of Little America stands alone. What was that like?

AW: It was extremely rewarding! The first director that I worked with, Deepa Mehta, is this legendary director and one of her films [2005’s Water] was nominated for the Best Foreign Language Film (now the International Feature Film category) at the Oscars. She does these very politically-minded female-fronted stories, I was floored that I got to work with her. That was really exciting!

Bharat Nalluri was super generous, collaborative, kind, and motivated. And Chioke Nassor, who is on the younger end of the spectrum, (laughs), just brought this unbeatable energy to show.

I really lucked out. I only designed half of the episodes because there was such an intense production period. Every episode is completely different, new characters, new sets, so it doesn’t run like the format of a normal show. It’s almost like eight mini-movies, so luckily we had Apple’s support, and we had a proper amount of time to prep each episode. We had one-on-one time with the directors, and the material, and we really got to throw all of our resources into it.

AD: I’m curious, how much time did you actually have for each episode?

AW: We had about three weeks to prep each episode, which does not sound like a lot, but in the TV world is fairly generous.

AD: What would you say was the biggest challenge working on Little America?

AW: The big standout for me was that because of the way production functioned, we had to create all these different worlds in New Jersey, which was a massive challenge. But it was also really fun, because where are you going to find an Oklahoma dude ranch in New Jersey? Or how am I going to create this Ugandan village in downtown Paterson? So, from a production design stand point, and making sets in New Jersey, the challenge of that was really rewarding. We got to build worlds where they shouldn’t be, you know? 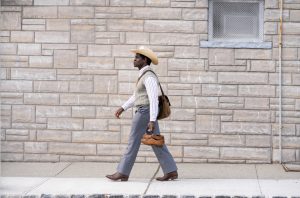 AD: How much of those sets did you build, and how much of that was taking advantage of pre-existing structures that you found?

AW: I would say it’s half-and-half. We were mostly location-based, and then we built on top of the locations so we could get the environments right.

For example, there was a Nigerian night market that we filmed, but we brought in a lot of scenery, construction, paint, and dressings to make it function and to make it work. And I think it’s really important not to have that stale interior studio environment when you’re trying to create these worlds. We brought the builds to the location which is quite challenging, but the end product is really worth it. It feels real to the audience

AD: Absolutely. Little America has been renewed for a second season. Have you heard anything and would you like to be involved?

AW: Yes, there is going to be a Season 2, and I’ve been invited back, so that’s really lovely. They are starting production really soon.

AD: I’m so excited so see what you do in Season 2!

AW: It’s really great! Apple actually renewed the show for Season 2 before the first season even aired. The nickname for the show was ‘dream’ while we were filming, and it was really a dream! Everyone was great, the amount of the caring was there, and the level of commitment was there.

AD: This being AwardsDaily, I have to ask you about your Emmy win for 2013’s A Crime to Remember. What do you remember from that experience? And where do you keep your Emmy?

AW: I keep my Emmy on my mantel. (Laughs). I just remember them calling off the name of our show, and I think I screamed some expletives (laughs) when I was getting to the stage. That was a big moment. It was really special. It was kind of like all of my dreams coming true, really. 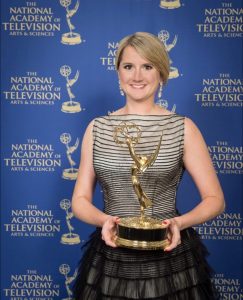 AD: That’s incredible. I know you’re in New Zealand at the moment. Can you tell me anything about the project you are working on?

AW: I’m in New Zealand right now. I’ve been here six months location scouting for an Amazon Prime series called The Wild. I can’t give too much detail about what it’s about, but it’s this beautiful drama with an all-female cast, set in the wilds of New Zealand.

AD: It sounds like you really try to embed yourself in your various locations when you do your scouting. I mean, six months is a sizable chunk of time. What is that like on a personal level?

AW: Yeah. One thing about these away jobs is that you just kind of fully immerse yourself. It’s a nightmare on your personal life. I have a four-year-old son, and because he’s not in school yet, I’ve been taking advantage of working overseas, and bringing him along for the experience. When you’re away in a different country, you’re focused on the material and away from the distractions, you can dive into it, which is exciting. And it’s exciting to work with different crews and get their perspective on their country. 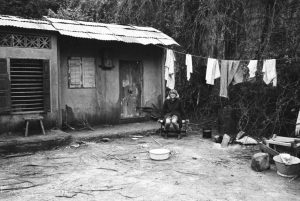 AD: You have one well-traveled four-year-old, I love it! Thank you so much for your time. I loved getting to talk to you, and I adore the show!

AW: Thank you for helping bring some attention to the show. It’s a really special show, I’m glad people are responding to it.

The Return of 'Shrill' Will Have You Screaming with Joy