Back in 1993 I was attending UCLA. It took me a while to get through college. I had a hard time getting through life in general. Only intensive therapy got me to the point where I was about to graduate at 29 years old with a bachelor’s degree. I’d applied to the film department but wasn’t accepted, so I took the next best offer and entered the theater department as a playwright. And yes, that is the degree I have – playwriting. The entire UC statewide university system had and still have an annual writing contest called the Samuel Goldwyn Creative Writing contest. On a lark, I wrote a screenplay in about a week. I just plowed through it, writing and day and night. And I thought, what the hell, I’ll submit it. Well, what a shock to find I had become one of the five finalists. I would go on to win third place and got my script mentioned in Variety and the Hollywood Reporter. That led to several agents asking me to send my screenplay. I ended up getting one meeting out of it. More than one person I met with told me, “Your writing reminds me of an up-and-coming filmmaker named Quentin Tarantino.”

That’s the year Tarantino’s career began. I would end up dropping out of Columbia Graduate Film School and retreating online. He would become one of the greatest directors America has ever produced. I always kept my eye on Tarantino, vicariously imagining the kind of success I might have achieved if I’d had my shit together enough to pursue my dream full-force as he did. It took me a long while to become a Tarantino fan but even from the beginning I always appreciated that his films seemed to burst forth from a fully-formed universe of his making. When you watch a Tarantino movie you step into an alternate reality that only he knows how to create.

I never expected that any of his films would land on my list of most watched movies. It’s not a big list but the titles on it are beloved. Then I saw Once Upon a Time in Hollywood. It’s the Tarantino movie that has at last grabbed and won’t let go, the movie that I’ve not only already watched many times but the one I know I’ll continue to watch and adore for the rest of my life.

The reason I think it’s the best film he’s ever made — his most accomplished and his most profound — is because, for me, it’s the first time his vision feels so intensely disciplined. Instead of putting everything in that occurs to his fertile mind, he’s made it mean, clean, and surprisingly lean — even though he tells a long story with several paths that diverge from the main one. If you watch it a few times you’ll understand why it’s his tightest film. Even when it’s as leisurely as the laid-back era it depicts, there’s never a wasted shot, never a scene that lags, because he knows that coaxing his audience to sink into sync with the rhythms of 1969 is the only way for us to feel how L.A. used to be, to understand what we’ve lost.

It goes without saying that Tarantino is a brilliant director. Once Upon a Time in Hollywood is filled with memorable shots and riveting sequences, from tracking shot that follows Cliff Booth into the suspense of Spahn Ranch, to the cars speeding down hairpin turns through the Hollywood Hills, or Margot Robbie dancing with oblivious bliss through a party where she seems to be lit by her own inner light. Even the smaller insert shots are impressive. One of cowboy boots walking up some steps as a woman in heels is walking down them. In this film he’s always mixing fact and fiction, overlapping real with unreal. Mirroring a lively active movie set with an abandoned and desolate movie set now infiltrated by hippies. 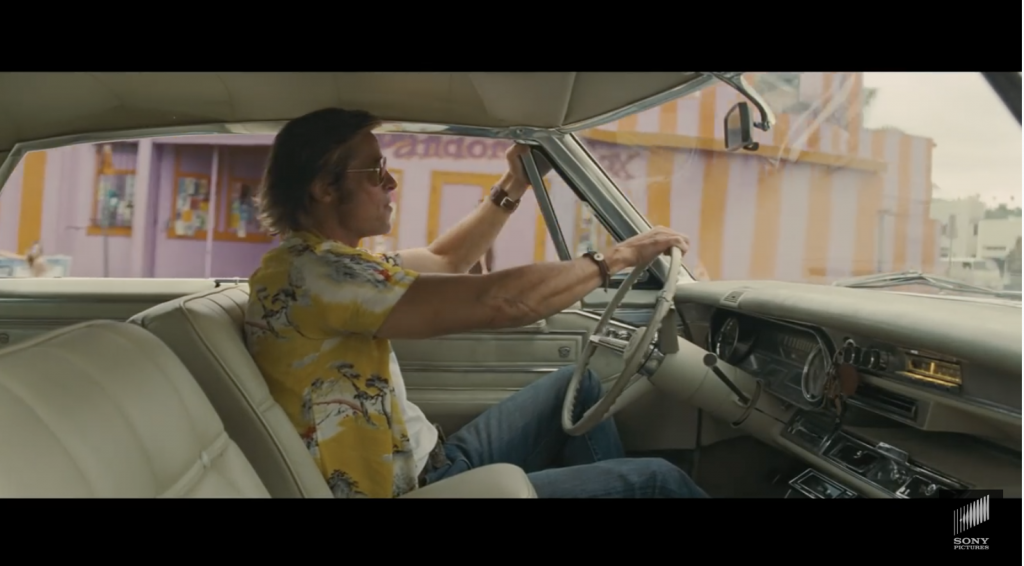 Of course, the story’s tension is felt most acutely if you know what the story is about. Maybe you had to live through it to really get it and perhaps this is where my own path lived alongside Tarantino’s starts to matter. He worked in a video store, and I worked in a video store, because that’s what movie geeks did in the 1980s. We grew both grew up in LA at the dawn of the 1960s. Our lives were touched by the Manson murders at an age when we were most impressionable. My parents met at Pandora’s Box on Sunset, a club which is glimpsed in one of the movie’s many roving street vistas, meticulously recreated.

It isn’t just that Tarantino’s film reminds me of my own past, and a lifestyle so vibrant that it’s burned into the memories of those of us who lived it; it’s also that the two main characters, Rick and Cliff, are both so likable, so full-tilt irresistible. How could anyone not become completely invested in their fates. And that’s why their story matters. It matters because we come to care about what happens to them. We get the privilege of spending the last innocent afternoon with a woman who’s on a collision course with the Manson family, and we ache for the fate we fear we already know is looming. We also meet a pair of unexpected heroes whose accidental paths have potentially put them in harm’s way as well. But then… Then we are given a gift.

A gift for those of us who spent many sleepless nights wondering how our sunlit world could be darkened and bloodied so fast. A way to escape the catastrophe that caused American culture to turn on a dime that hot August night in 1969.

Once Upon a Time in Hollywood is the best film Tarantino has ever made because it is a love letter to the art of movies and the magic that movies can conjure. Yes, on one level it’s a way to reimagine, even for 2 hours, a world that might have remained unchanged by a tragedy so horrific. But it is also a love letter to a time and a place and an attitude that have long since vanished. Once Upon a Time in Hollywood take the fragments of that era that still remain — the neon lights of the El Coyote, the endless boulevards that stretch like tawny limbs to take us from here to there. The dreamers who come here to make something of themselves, to find success, to risk failure, or to settle for something in between. Somehow out of this fairy tale wasteland a brilliantly inventive director was born.

This has been a year of great, great movies. They are so many that are so great that even the ones that aren’t as great as the greatest are still great. Years like this don’t come around very often. We should be reveling in the wealth of artistry we’re here to witness. That’s another thing to think about when we soak in the nostalgia of a golden age gone by — to be reminded that few people saw what a golden age it was until it was over.

Tarantino faced some hard, personal truths in this film which is, at its heart, about reconciling present efforts with former glory. Many of his fans believe that his best movies are behind him but I don’t think that’s true. A certain kind of Tarantino movie might be a thing of the past. But now he’s reaching down deeper and finding new things to say, as only one of our most interesting and original auteurs is able to do.

Once Upon a Time in Hollywood completes Tarantino’s trilogy of horrifying realities and redemptive rewrites of faraway moments in history. No one can erase those horrors; they are still with us every day, as painful lessons need to be. But Tarantino understands that the function of cinema is often to offer a great escape, a fantasy, a nightmare remade as a dream, the chance to sit in the dark and imagine what if.

Tags: Once Upon a Time in HollywoodQuentin Tarantino