The State of the Race: What the BAFTAs Tell Us, and What They Don’t

The key to this year is the shortened season

Last night, the BAFTAs showed that they did not want to spread the wealth and instead went all in with 1917. They showed pure patriotic love for the film about the war that means more to the British people, probably, than it does anyone else. World War I was a turning point for humanity in the modern era. It birthed TS Eliot’s greatest poem, The Waste Land, and altered the course of the most beautiful art before and after the war. No one really knew what the Great War would be like until the bodies started blowing up and piling up, leaving devastation in its wake. 1917 is a beautiful metaphor for the realization of what that war said about human beings. We’ve always been violent. We’ve always reinvented our tools to kill animals and each other. We’ve done terrible things throughout our reign on this planet, but nothing could prepare us for the combination of all of those things playing out like monstrous theater, theater that slaughtered millions and decimated Western Europe from 1914–1918.

It is not a coincidence that the three strongest films right now are 1917, Parasite, and Jojo Rabbit, which have broken away from the pack because their themes resonate with voters. 1917 is an epic — something which hasn’t won Best Picture since 2003. In fact, there hasn’t been a sweep at the Oscars since the ballot expanded in 2009. The last film to really sweep was Slumdog Millionaire, which won all the precursors en route to winning Best Picture and seven other Oscars. It swept the BAFTAs with seven awards. But the BAFTAs do not use the preferential ballot. The Oscars do.

Cutting into 1917 over here is undoubtedly Parasite, Bong Joon Ho’s captivating film about a class war within a class war. It manages to be, like Bong himself, charming and provocative all at once. It’s heartbreaking and brilliantly written, acted, and directed. Jojo Rabbit is similar to Parasite in that it’s a vibrant, wild satire with a beating heart at the end. Parasite is more tragic, even though Jojo is about the Holocaust. There is something about Parasite that feels a lot like right now — the Kim family clings to hope in a hopeless world. In Jojo Rabbit, there are heroes. The Americans are heroes, for starters. Jojo is a hero. By contrast, in Parasite, like in 1917, the hero is but a player in a much larger, endless tragedy playing itself out, regardless of what we do.

In this climate, it’s harder for a film like Quentin Tarantino’s Once Upon a Time in Hollywood to prevail, or Martin Scorsese’s The Irishman, or even Took Phillips’ Joker. They can’t quite get to where the three Best Picture frontrunners are because they are specific, much much darker, and offer very little in terms of a respite from the horrors of humanity. In The Irishman, Robert De Niro kills Al Pacino, his good friend. In Joker, Joaquin kills Robert De Niro. And in Once Upon a Time in Hollywood, Brad Pitt kills the Manson murderers. These films will likely find their place in the long history of American film, as they are among the best of the year. But finding a place in this year’s Oscar race has proven difficult.

What helps 1917 heading into final Oscar voting is the shortened season. There is no time for counter narratives to form, as they have done in years past with the rise of social media. There have always been whisper campaigns and on-the-ground buzz, but what we see now is new. Films can now be targeted not just by rival studios but by any rando online, any critic, any interested party beyond even those who mount the campaigns. It gets brutal.

But this year, the Academy was experimenting with a shortened timeline. At the same time, Universal waited until the last possible second to show 1917, and did so with as much impact as possible. They packed screening rooms, targeted voters in hopes there was enough time to break through to the consensus. Indeed, most of us had Sam Mendes’ place in the Best Director lineup held based on some very early word from a test screening. It sounded incredible just in what he was trying to do. Was it the winner? No, it couldn’t be, because it would defy the modern era of the late breaker having no chance to win Best Picture.

Why have late releases struggled with winning Best Picture since Million Dollar Baby? Because when a film becomes an Oscar contender or frontrunner, it becomes a target immediately. If the film has time to deflect the hits, it can rebuild itself and come back strong, like Argo did. But if there is no time with a shortened calendar, the negative buzz will come splashing back and hit right in the thick of Oscar voting, making it suddenly too divisive to win on a preferential ballot.

The best and most obvious example of this was La La Land, which won everything that 1917 has won and headed into Oscar night as the frontrunner. It had already been seen in Venice and Telluride and had a Best Actress winner. The only thing La La Land didn’t have was a SAG ensemble nomination. But that beats 1917, which had no SAG nominations. 1917’s lack of acting nominations can be easily explained in that the lead performance of George MacKay, whose acting gives the film its emotional impact, was simply not a big enough star to break through in such a competitive year for Best Actor. Even Christian Bale couldn’t break through. There were so many strong performances by men competing for just five slots. But still, stats wise, this omission does give one pause when it comes to the preferential ballot.

Three films have won seven BAFTAs since 2000, when they shifted their date to being before the Oscars. Since the BAFTAs only have five nominees for Best Picture, it is easier for them to have a single film that wins a lot of awards. Even still, the majority of the time they split their votes. You can also see from the below chart that sweeps were so much more common before the preferential ballot (Slumdog Millionaire) than after (The Artist, The King’s Speech): 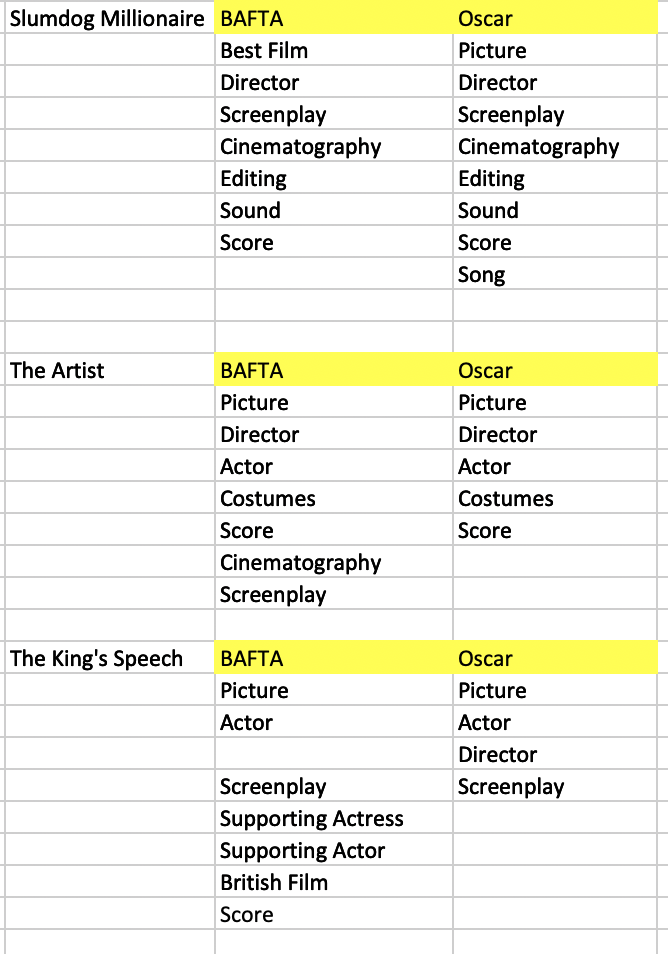 It is in hybrid territory with a film like Gravity, which won:

12 Years a Slave won Best Picture at BAFTA and then at the Oscars.

It would go on to lose to Moonlight, which also won the Globe for Drama.

There is only one film in the era of the preferential ballot to win Globe, PGA, DGA, and BAFTA for Best Picture and Director and lose Best Picture, and that is La La Land.

For all of these reasons, 1917 does not feel weak heading into the final days of Oscar voting. If it doesn’t win Best Picture, it will be because of the preferential ballot. Without it, there is no chance it loses.

If it weren’t for the preferential ballot and having nine Best Picture nominees, 1917 would be an Oscar sweeper. Even Thomas Newman would finally win an Oscar after losing 14 previous times. But as it is, voters like to spread the wealth with an expanded ballot in place.

We’ve all become too accustomed to an Oscar race we mostly understand. The shortened season has upended that, at least it seems like it has. We’ll find out in a week if that’s true.

A Bizarre Footnote in the 'Ford v Ferrari' Story