Members of the Oscar press received a sneak preview of the amazing facility and what's in store for opening day.

Update: Variety reported today that the project is now $100 million over budget. The museum is scheduled to open on December 14, 2020.

In advance of this weekend’s 92nd Academy Awards, the Academy Museum of Motion Pictures leadership team granted Oscar press a sneak peek at what’s to come for their ambitious project. When the museum opens later this year, it will boast multiple floors of innovative and inclusive exhibits, two theaters, a restaurant, a retail store, and a stunning open-air space overlooking Hollywood accessed by the Barbra Streisand Bridge.

“The motion picture community and movie fans from around the world know how much the Academy Museum will mean for the global appreciation and enjoyment of the movies,” Director of the Academy Museum of Motion Pictures Bill Kramer said. “We are deeply grateful to our donors and partners for their magnificent generosity.”

Located on Los Angeles’ Miracle Mile at the corner of Wilshire and Fairfax, the Academy Museum is established in the former May Company department store in the famed Saban Building. Part of the extensive renovation process required a careful restoration of the cylindrical golden exterior. There are over 350,000 hand-laid tiles, approximately 35 percent of which was replaced with new tiles by the original manufacture. Storefront exteriors will be retained to highlight a taste of the exhibits offered within. 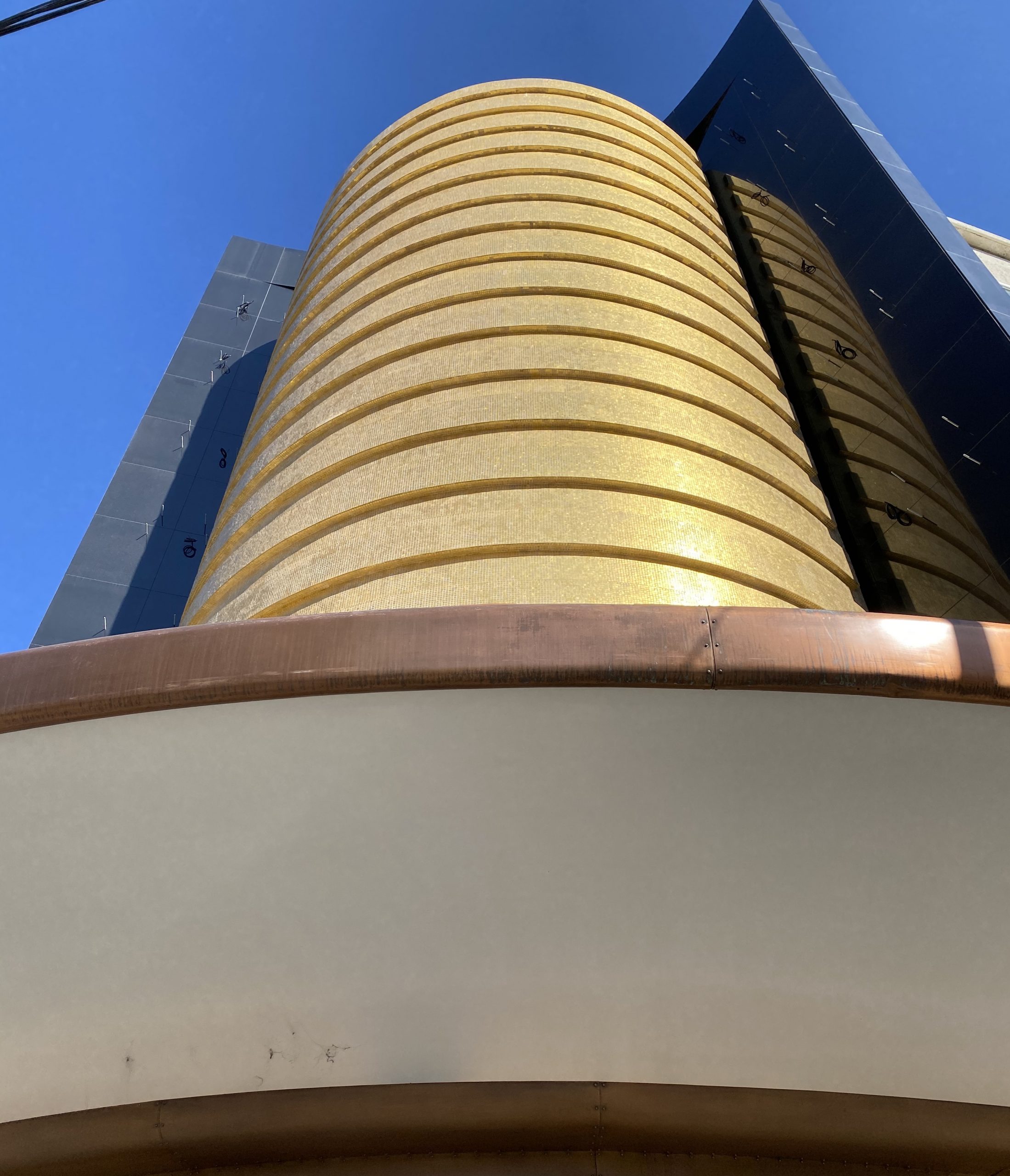 When the museum opens, it will house an enormous collection of film history. This amounts to 12.5 million photographs; 237,000 film and video assets; 85,000 screenplays; 65,500 posters; and 133,000 pieces of production art. The featured exhibitions will rely on these curated pieces to celebrate film and the movie making process. The museum’s core exhibits will be featured on the second and third floor and will represent the past, present, and future of all genres of filmmaking. One core exhibit will take guests through the collaborative process of filmmaking through all of the Academy’s 17 branches. It will employ 1939’s classic The Wizard of Oz to illustrate general filmmaking concepts. Other exhibits will feature studies of sci-fi and fantasy filmmaking, black cinema from 1900 to 1970, and a one-of-its-kind retrospective of Hayao Miyazaki and his Studio Ghibli films. 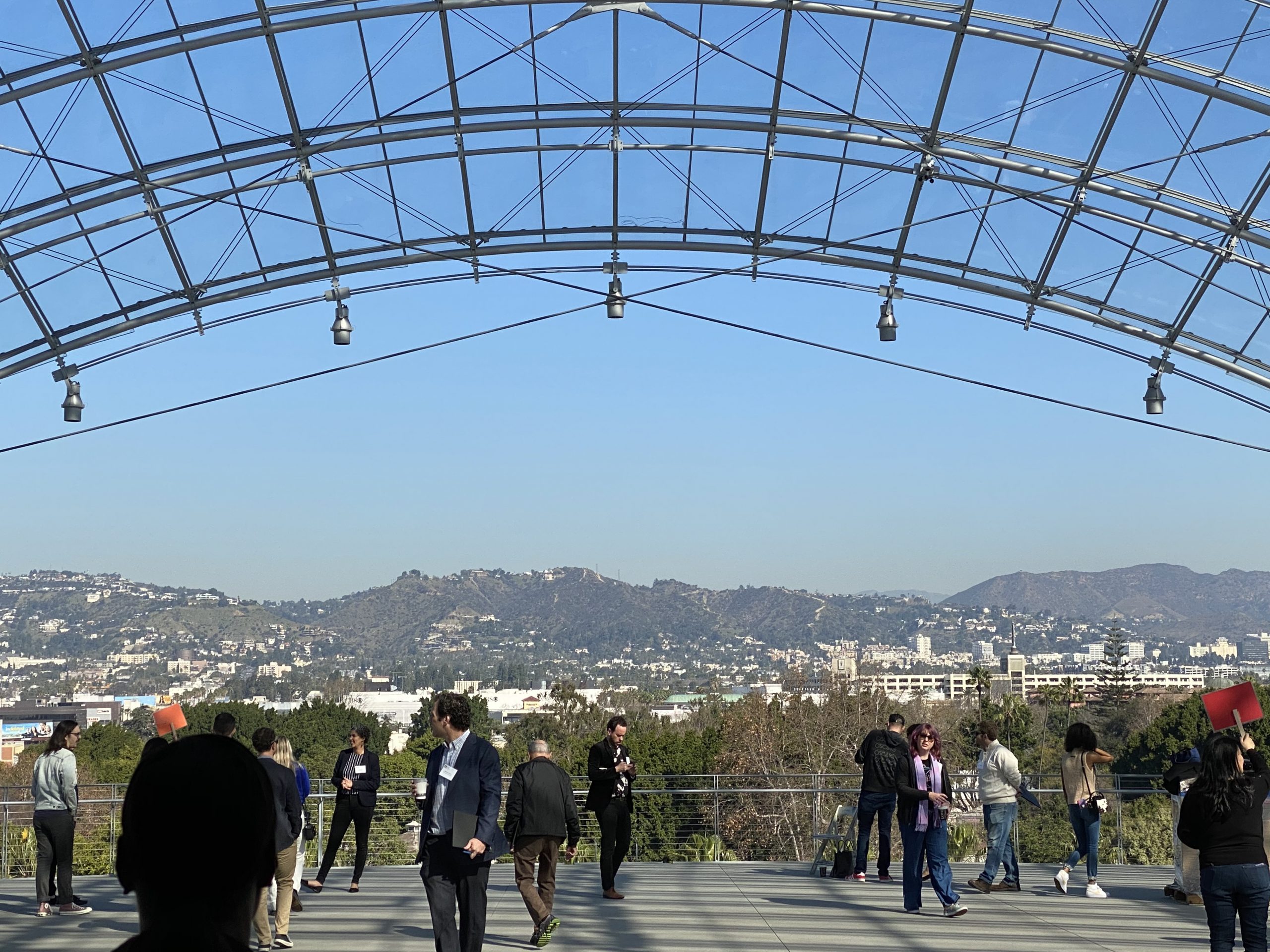 The most stunning addition of the building is the Dolby Family Terrace, located on the top of the sphere. Its vast portico offers a stunning vista of the Hollywood Hills and is shaded by a massive open air dome comprised of 1,500 panes of 146 different shapes and sizes. Each pane will rotate with the sun to shade the space. This is also accessed by the glass Barbra Streisand bridge which, as other outlets have reported, already has a crack in one of the glass panels.

A Campaign for the Academy Museum team, headed by chair Bob Iger and co-chairs Annette Bening and Tom Hanks, raised more than $368 million in pledges and cash. That figure amounts to 95 percent of its pre-opening campaign goal. This fundraising helped the Academy realize a goal to build a film-focused museum first imagined 90+ years ago.

An opening date for the Academy Museum of Motion Pictures will be announced “very soon,” according to Kramer.

“Hollywood: Her Story” Will Change the Way You Think of Film and Film History