Predictions Friday – It Will All Be Over Soon

You learn a lot when you cover the Oscar race for twenty years. You learn things about the way a consensus votes. You learn about how people think individually and how they think as a broader hive mind. You learn why people vote for films and why they don’t. But there are some things you can never know. For example, I’ll never know why Bohemian Rhapsody won the ACE Eddie and the Oscar for editing. I’ll never understand that, but I knew it would win somehow.

The categories that feel wide open right now (although they all are, really) for me personally hover around the two sound categories, visual effects, editing, and production design. These could all go a few different ways and there is no telling which way they will go. Last year, my very high score of 22/24 (which I’ll never match again — I can promise you that) was mainly because I got lucky. I didn’t like The Favourite so I predicted it for nothing, even though it won a lot of BAFTA awards. I had a feeling they liked Black Panther a lot (like they probably like Parasite a lot, in the same way) and thus, it was going to win as many categories as it could win. Those two competing narratives is why I did so well, in addition to knowing Green Book was going to win Best Picture and that it had to win Best Original Screenplay to win Best Picture, even though one of the writers had been called out on Twitter. It had to win Screenplay if it was winning Picture because it wasn’t nominated for Best Director.

So let’s go through them all, shall we?

I have already written extensively on why I’m sticking with 1917. The overall reason, and the theory I’m testing again this year, is simply this: the Best Picture winner is usually the movie you can sit anyone down in front of and they will get it if not love it. It doesn’t require a level of sophistication to get, and it can’t be a film that gets better on a second viewing (although the best films do). It has to be that one movie you reach for at a Christmas party that you know everyone is going to be more or less okay with. Obviously this year that movie is Ford v Ferrari, but that isn’t going to win Best Picture.

Once Upon a Time in Hollywood isn’t that movie because people seem to be perplexed by the ending so much so it needed a whole YouTube video to explain it. Of course, for those of us who do get it, we love it. Jojo Rabbit is also one people have trouble with, but those who love it really love it. But do you put that disc in the player with your relatives, not really knowing how they will react? Parasite is similar. It is the closest to a movie movie anyone can get. A good many people DO get it and love it, but though its themes are universal you are still asking people to accept a level of fantasy, or at least parable. However beautifully rendered Parasite is, and it is, some people won’t be able to really go there because of the suspension of disbelief it requires. In any respect.

1917 is, therefore, the film that most people can get. Anyone can get it. You can get it in any language. You could get it as an animated movie. As a black and white movie. It is a linear story about a hero’s journey. It is fundamental storytelling. That doesn’t mean everyone loves it. It might not mean everyone likes it. But it does mean everyone GETS it. And that is what I am betting will win.

Of course, who knows, right? It could be anything. I will know the moment I walk into the Dolby theater and listen to the chatter what movie people love and what movie they don’t love. Since I love all of the movies, it will break my heart to see any of them lose anything.

There is a relationship between these three categories. A very strong relationship between directing and cinematography, needless to say. Visual effects can sometimes be included but usually only if there is a sweep, like Titanic. Or, say, Life of Pi or Gravity — both of which didn’t win Best Picture but did win these three. Technology has disrupted filmmaking in a way that encompasses both cinematography and visual effects, which have had to evolve as technology has evolved, from film to digital.

In general, in the era of the preferential or expanded ballot, voters like to spread the wealth. But only so much. This is how many Best Picture contenders went home empty handed since 2009:

If there is any trend at all, it’s that voters are spreading the wealth even more than they did when they had ten nomination slots for Best Pic and ten nominees (2009, 2010). But this year is a weird year because so many of the same films are in the same categories. Every category, in fact, has at least one Best Picture contender in it:

It really does seem unthinkable that any of these films up for Best Picture will go home empty handed. But figuring out what might win something somewhere is the tricky part.

I would not bet on anyone but Sam Mendes, who has won the Globe, the DGA and the BAFTA. But that doesn’t mean it’s an absolute lock he’ll win the Oscar. Both Bong Joon-ho and Quentin Tarantino could shock in the category, but I would never recommend predicting anyone else.

The acting categories feel locked to me. There has been some chatter about Laura Dern being possibly upset by Scarlett Johansson in Jojo Rabbit. I could see this happening. But voters like Marriage Story too. Thus, considering Dern has never won and has been so celebrated lately, and is Hollywood and Academy royalty, I can’t see her losing this. Each and every one of the voters knows Dern. Like personally knows her. For her involvement in the Academy itself and from her long career in Hollywood.

This one is so tough. SO SO SO tough. Bong Joon-ho has won the WGA and the BAFTA. Quentin Tarantino has won the Golden Globe. But I had a bit of a Eureka moment today as I was mulling this over. As Marshall Flores points out, only three films have won editing without having a sound nomination since 2000: Traffic, Crash, The Departed. What did all of these three films have? ACE/WGA/SAG. Therefore, it makes sense to predict Parasite for both Original Screenplay and Editing. Originally, I had Once for Screenplay and Ford v Ferrari for editing, but that left me with only International Feature for Parasite and there is no way that is happening. It will win where it can — and honestly, if it wins these three it could win Best Picture.

Weirdly enough, in the era of the preferential ballot, one movie wins both more often than not. Since 2009, The Hurt Locker, Inception, Hugo, Gravity, Fury Road, Dunkirk, and Bohemian Rhapsody have won both. So that’s 7/10 years. So your choices here are either Ford v Ferrari, Once Upon a Time in Hollywood, 1917, or Joker.

I am probably going to stick with 1917 for both, though it is likely it will only win one. I just don’t now which one. Same with Ford v Ferrari. Very likely to win one — probably mixing — but I don’t know which. So I could predict that one for both too. But I’ll stick with 1917 since it’s a war film.

The other categories I remain unsure of how they will land. Production Design? No clue. Could be anything. Costumes — probably Little Women. Documentary? Probably American Factory given that the Obamas are connected to it, but I’m going to take a chance and predict The Cave.

I might switch a few before Sunday, as I always do, but for now, here are my predictions.

For fun, here are some charts on which Best Picture nominees of the preferential ballot era went home empty handed: 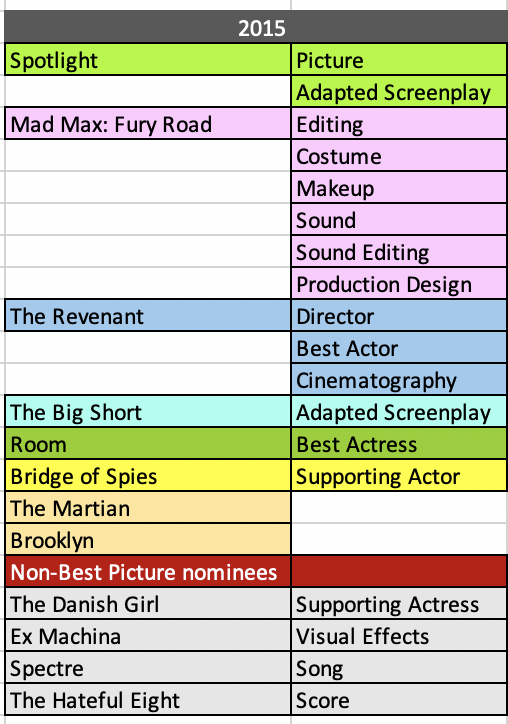 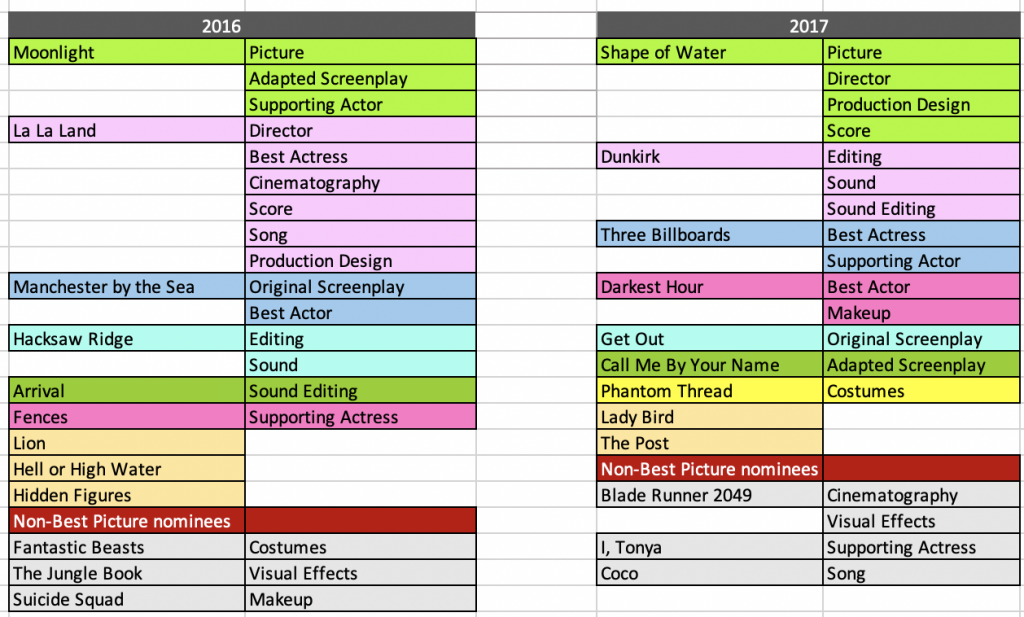 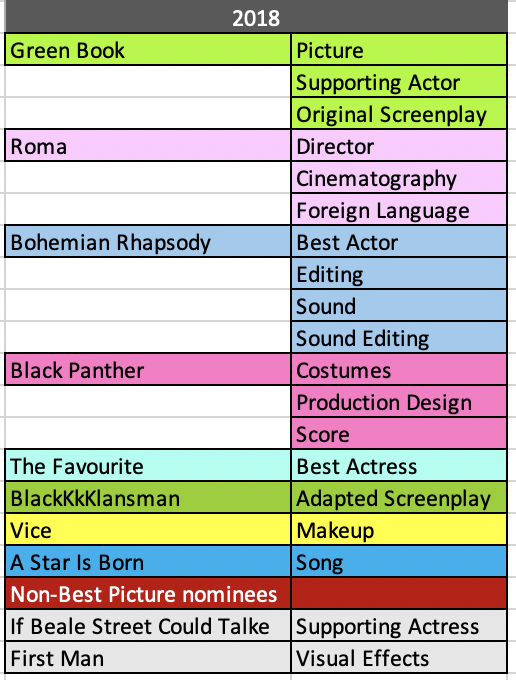