by Zhuo-Ning Su
in Berlinale, featured
4

Hi! It’s your Awards Daily Euro correspondent checking back with the first festival update of the year. Following Venice and Cannes, the Berlinale also turned 70 this year, and all eyes are on new artistic director Carlo Chatrian, who took over from Dieter Kosslick after an 18-year tenure.

During the Kosslick-era, the Berlinale has grown continuously in size, becoming one of the biggest public film festivals in the world, but the quality of its selection has been hit and miss. For every inarguable masterpiece (2011 Golden Bear winner A SEPARATION), you can usually name a questionable follow-up (2018 champ TOUCH ME NOT). As gloriously as THE GRAND BUDAPEST HOTEL opened the festival in 2014, you get downers like last year’s THE KINDNESS OF STRANGERS.

For my money the anniversary edition is off to a soft start. Canadian director Philippe Falardeau‘s MY SALINGER YEAR was a sweet, perfectly agreeable affair that, if nothing else, confirmed the star presence of Margaret Qualley and gave us Sigourney Weaver in some seriously delicious ’90s garb. As a feel-good out-of-competition opener, it got the job done, even if it felt rather slight for the occasion.

The first two competition titles to screen were – each in their own way – both interesting and frustrating. Argentinian director Natalia Meta’s THE INTRUDER has the right ingredients for a genre fright fest: a young woman suffering from recurring nightmares, creepy sound studios where Japanese bondage flicks are dubbed, a game performance by lead actress Erica Rivas (memorable as the bride on the verge of a nervous breakdown in Oscar-nominated WILD TALES). It also refuses to go how you’d expect it to, which is a definite plus in my books. That said, the lack of genuine thrills, however cheesy or implausible, proved a turn-off.

Italian director Giorgio Diritti’s HIDDEN AWAY, a biopic about the uncommon life of painter Antonio Ligabue, is even less predictable. Via sharp, decisive if not always narratively communicative edits, the film jumps between different stages of Ligabue’s tough upbringing and curious career. It defies linearity at every turn and leaves you with a portrait that’s inscrutably subjective, at times downright arbitrary. Eventually you do get the sense of witnessing a tortured genius coming into himself – thanks also to the intensely committed performance by Elio Germano – but the two-hour trip there is anything but easy.

All this is a long way of saying that, to my own great surprise, what I’ve liked the most from the first two days of the festival turned out to be the Johnny Depp vehicle MINAMATA, a based-on-real-events period drama presented out of competition. Directed and co-written by Andrew Levitas, the film chronicles the journey of New York photographer W. Eugene Smith (Depp) to the titular Japanese city in the early 70s, where toxic waste has been dumped by a local factory for decades, leaving behind a trail of deaths and casualties. Smith, a contributing photographic journalist for Life magazine whose career was in alcoholism-induced free-fall, was approached by Aileen Mioko (Minami), a Japanese activist seeking to spread the word on what’s been happening in her country. After he reluctantly accepted the invitation and Life reluctantly commissioned the project, the two flew back to Minamata and started a fight that would forever change and define their lives. 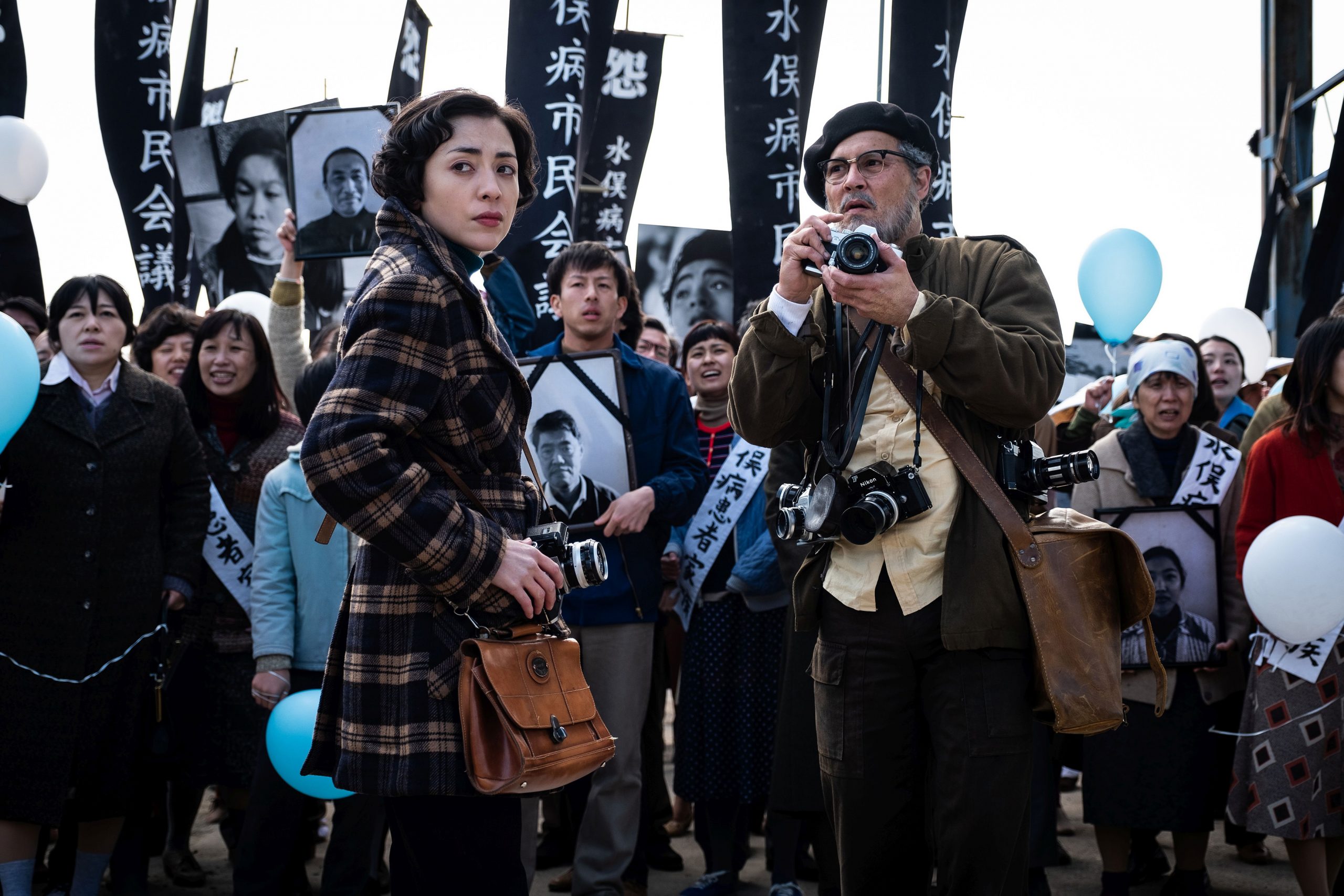 Comparatively conventional in structure and amply reminiscent of other films that deal with environmental disasters or social injustice, MINAMATA won’t escape criticisms of tropes and dramatizations. But I find in telling such an important, ever-timely story, subtlety and narrative inventiveness can take a back seat to effectiveness. Which is why I don’t really mind being “manipulated” by the neatly arced three-act screenplay with the mandatory breakthroughs, setbacks and climatic ending. It’s also why in such cases I tend to not even notice whatever white savior narrative others may be eager to point out. Obviously the memory and dignity of real-life victims should never be exploited, but I do not consider all pursuit of dramatic effect to be trivializing either. With MINAMATA, there’s enough to suggest genuine sympathy with and actual rage for those affected by immoral business practices, as well as a deeply felt appreciation for the art of photography. So yes, there’s bound to be inaccuracies and exaggerations in this fictional account of a historical tragedy, but it hit all the emotional marks to remind me of the power of compassion and to compel me to educate myself further on a grotesque man-made catastrophe I did not know about. And that, to me, is a job well done.

By the way this is the best I’ve seen Depp in years. Granted, that’s not saying a whole lot, but his stripped, vanity-free portrayal of a disenchanted artist finding inspiration anew in a foreign land plagued by misery reveals a warm, humanistic side to his superstar persona that touched me. French-Japanese actress Minami is every bit as good, holding her own in an intimate dance with Depp that showcases the love and camaraderie that blossomed under the most unfortunate circumstances.

French DP Benoît Delhomme did not disappoint on a film very much about the essence and soul of photography. His imagery is crisp, vibrant, the distinct visual languages he created for the scenes in New York and Japan vividly expressive. The score by iconic Oscar-winning composer Ryuichi Sakamoto is by turns tender and stirring, culminating in a tidal wave of gorgeously indignant notes that all but melt the end credits in tears.

So yeah, slim pickings at the start of the 70th Berlinale but MINAMATA struck an unexpected chord. As the festival heads into the first weekend, hopefully more surprises are on the way. Stay tuned.