The 8th annual SCAD aTVFest kicked off on February 27 in Atlanta, Georgia.

Shadan Larki is attending the 8th annual SCAD aTVfest in Atlanta, Ga., which features some of the best in television, including Matt Czuchry of The Resident, the premiere of the new ABC legal drama For Life, and Kim Cattrall and the cast of Filthy Rich premiering their new primetime soap.

Greetings from Atlanta! We’re only one day into the 8th annual SCAD aTVFest and already we’ve seen crowd-pleasing premieres, big stars, and big honors being given out.

I started off my day by going to see Matt Czuchry accept the festival’s Maverick Award. In his speech, The Resident star reflected on conversations with his The Good Wife costar Archie Panjabi, about how she had grown up not seeing herself reflected on screen, and the pride he felt seeing his friend become the first actor of South Asian decent to win an Emmy in 2010. He humbly spoke about being so nervous for his first on-screen kiss with Gilmore Girls leading lady Alexis Bledel that he spilled champagne all over her dress while trying to play it cool.

We then got an early look at next week’s episode of The Resident (don’t miss it, trust me) and Czuchry was candid about the nuances of playing a medical professional and trying to capture the current challenges of the health care industry.

Afterwards I got to see the premiere of the new ABC legal drama For Life starring Nicholas Pinnock as a man falsely accused, who then becomes a lawyer and fights to overturn his life sentence. The pilot is relatively by-the-book, but Pinnock is terrific as the show’s lead, as is Joy Bryant as his wife who has to contend with unexpected consequences of her husband’s imprisonment. For Life’s pilot sets up a compelling and timely legal drama.

I also got to speak to the cast and producers behind FOX’s new primetime soap opera, Filthy Rich, about a televangelist family, led by Kim Cattrall, as they suddenly lose their husband and father and must fight to keep the family together as his secrets threaten to undo their carefully calibrated image. 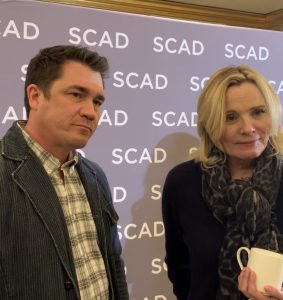 “Instead of an Icon Award, I’d like to think of this as an ‘I Can’ Award. I can, and I will,” Cattrall said.

She also thanked the “work families” she has had in her career for their “patience and understanding that I would get there.”

Meeting Cattrall, speaking with her, and seeing her in Filthy Rich, you realize she is nothing like the iconic Samantha Jones. She is again, incredibly humble and kind, and it is obvious she adores this show and her role as an actress and executive producer.

Filthy Rich is a treat to watch and Cattrall is absolutely perfect as a conservative, Christian Southern belle who has built a billion-dollar empire and is ruthless in her efforts to protect it. Filthy Rich is the kind of fun, easy-to-watch television I’ve been missing in the age of brooding antiheroes. The pilot features stunning costumes, a big, over-the-top slap, and a twist that I can’t wait to see unfold.

Day 1 of aTVFest was a blast and an experience I’ll never forget. I can’t wait to see what the rest of this weekend has in store (and of course, I’ll tell all of you all about it)! For now, I’m off to get some rest and eat peach cobbler! Check back tomorrow for more coverage of SCAD aTVFest 2020.