Brandon Campbell on Creating Thrilling Scores For ‘Amazing Stories,’ ‘The Letter For The King’

The composer discusses collaborating with Ramin Djawadi, his work on two new series, 'Westworld', and much, much more.

by Shadan Larki
in ADTV, News
0

Brandon Campbell is a very busy composer. He has not one, but two new series streaming right now. He re-teamed with director Sylvain White and his long-time collaborator Ramin Djawadi to co-compose an episode of the Apple TV+ series, Amazing Stories.

Campbell also composed the score for The Letter For The King. Netflix’s six-part adventure series sees a young boy sent on an unlikely and dangerous mission.

I spoke to Campbell about both of these projects, his years-long working relationship with Djawadi, my favorite episode of Westworld, composing video games, and more!

Read my conversation with Campbell below. Be aware there are spoilers for his work on “The Heat,” so watch that episode before reading on. 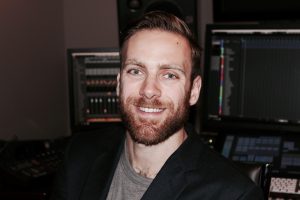 Awards Daily: Let’s assume that the audience that’s going to be reading this doesn’t really know that much about how scores and compositions come together. How did you decide what instruments you were going to use? How did it all come together for you on Amazing Stories?

So we decided to limit most of the instruments to being chamber, strings, and piano. And once we decided on that, we then had to figure out how to play moments that were supposed to be more upbeat or more exciting versus the moments that are more kind of sad or horrific even—that moment when she realizes she’s dead or one of the moments when the girls feels completely alone and overwhelmed by the fact that they’re stuck in this purgatory.

AD: This is your second time working with Sylvain White, you previously did Slender Man (2018) together. How does this experience compare to your last collaboration? Both projects are kind of similar,  in the fact that there is that horror or supernatural element there. How was this experience for you both?

BC: Working with Sylvain is amazing. He had an idea about what music’s role should be in both of these projects, even though they were different ideas. He knows what he wants, and he’s got a good sense of music. So it’s fairly straightforward. We try things and if he doesn’t like them, he knows why he doesn’t like them, which is not always the case in this industry. And he’s confident in his decision-making.

AD: That’s an interesting point you bring up about the role that music is supposed to play in whatever given project that you’re doing. As a composer, what’s your view on that? What role do you think music should play, or does play, in the things that we consume?

BC: I guess it depends on the project. Sometimes, in Slender Man for example, we’re following the girls around and their psyches are unraveling as they’re being chased by this monster. We wanted to play the internal despair, terror, and emotion that these girls are feeling. Sometimes it’s understated and trying to be very internal. But, sometimes, like in Amazing Stories, sometimes you’re playing to the action, like in the track scene when they’re running, the music is very upbeat and very active. I think it was mixed pretty loud in the show. It’s supposed to really propel you through the scene in the montage and accentuate the drama.

AD: I remember that scene, the music, sort of shook my senses. [Laughs].  Another person that you have collaborated with many times, and you’re working with on Amazing Stories, is Ramin Djawadi. There’s just so many elements that I could ask you about, whether it be Game of Thrones or Westworld [we’ll get to that later in the interview]. But, what is your working relationship like and what have you taken away from it?

BC: We have a great working relationship. I started off in 2010 as his writing assistant, and then as I went off on my own, he helped to support me and I wrote music on some of his projects. Our first co-collaboration was on Slender Man, where we both were the credited composers.

It’s really easy working with Ramin because I know where his musical tastes and styles lay, and as a co-composer, can do more of my own thing than when I’m just writing additional music. He’s a great guy. He’s open to criticism and he gives great feedback. He really has a great way of managing a score and the entire musical production.

BC: Well, instrumentation-wise, it depends always on what the project is. On Amazing Stories, like I said, we decided we wanted chamber, strings, and piano.

I did help out on a season of Westworld. Obviously, that’s much more electronic, and it just really depends on what the project can handle, or allow, or kind of demands of the music. Some projects require the full orchestra—big, powerful sounds. Other times, you want something really small and fragile that can be accomplished through strings, or just piano, or electronics. There’s really no limit to what combinations you can have.

AD: And I’m assuming you sort of do your best to keep your personal preferences at bay and go in as a blank slate.

BC: Yeah. I mean, I definitely lean toward using the orchestra when I can. I think the orchestra is the most versatile, and powerful, and emotional. . .there are so many colors available in the orchestra. The possibilities, just within the orchestra, are limitless. But sometimes, if the project requires an all electronic, or an ambient, or a much smaller-sounding score, I enjoy those equally as much.

AD: I know that you have The Letter for the King coming out soon [on March 20]. What can you tell me about that project?

BC: Yeah! It’s a six-episode series coming to Netflix based on this Dutch novel called The Letter for the King. It’s a story that follows this young boy who was thrust into this journey. He is given a mission, that is really more of a grown man’s responsibility, to deliver this letter on the other side of the kingdom to a King, as he’s being chased by people that have nefarious intentions.

It’s an orchestral, adventure score, but we wove in a lot of Western elements. There are acoustic guitars, some vocals, the fiddle, and trumpet. Our approach to this project, and our vision as it came together, was a Western that takes place in the middle of this magical adventure. 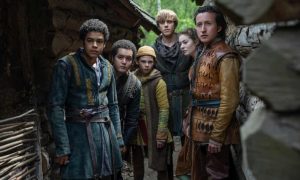 AD: Going back to Westworld, I was doing research on your work, and I know that one of the episodes that you worked on was “Akane no Mai.” [The fifth episode of the second season introduces “Shogun World” set in feudal Japan]. Can you tell me about that? In my opinion, that episode is truly one of the best produced episodes of television, I think, of this last decade. How did you go about scoring that episode? It’s so unique from the rest of the series.

BC: First of all, working on Westworld was amazing. I loved, absolutely loved, the first season! When it turned out that Ramin needed just a little bit of help, I was more than happy to contribute any way I could. That episode takes place in Shogun World, which is one of the things I wrote the music for in Season 2.  So how do we go about that? We wanted to stay true to that Westworld sound. There’s still some electronics in there, but obviously we had a lot of room to play with this idea of Shogun World.

We recorded some ethnic instruments, not only Japanese, but also things that you couldn’t exactly place in a specific region, and sometimes play them untraditionally. I had a Koto, and I was blowing it with a violin bow to create the ethnic-sounding strain throughout that episode.

AD: I know that you’ve also done a lot of video game scores. And I’m assuming that can be particularly challenging because the whole goal is to make sure your audience is completely consumed within the game, I would say, maybe even more so than television and movies. How does that idea play into what you’re doing when you’re creating the score?

BC: I think I try to approach them the same way. In video games, at least the video games I’ve worked on, there are lots of cinematically cut scenes, and you score those just like a movie.

There’s a story as you follow around these characters, there’s some kind of conflict, the characters react in some way, and they’re seeking some kind of resolution, that part is just like a movie.

The gameplay aspect, it is different. You have footage from the gameplay in stealth mode when your players could be sneaking around and combating a lot of enemies at once. The music needs to be sneaky and minimal. And other times, you’ll be in an all-out-war so the music has to be powerful and in your face.

You’ll know whether the level you’re scoring is the kind of level where you’re being overrun or if you’re running through and kicking ass. The score could be more fun and rock ‘n roll or it could be more heroic because you’re saving someone. All of those things play a factor in how music is written for each level.

AD: I’m curious–you’ve done film, TV, and video games: Which one provides you with the most versatility as a composer?

BC: Oh, that’s a good question! I don’t know! That’s probably my favorite thing about this job. Each aspect of those things is completely different, and I love the variety. I would say if I had to pick one, movies probably require the most versatility and variety, if that is your question, because they come and go the quickest.

For a video game, they go on for over a year. But on a film, if you’re lucky, you have four months. If you’re unlucky, you have five weeks. So you have to get into that world and figure out what you’re going to say, and figure out how you’re going to say it, in a relatively short amount of time and then it’s over. Then you’re onto the next project, which could be completely different, even if it’s another big action movie, it’s a completely different mindset.

AD: My last question for you: Can you tease anything that you’re working on now? What can we expect from you in the future?

BC: Hmmm. I can’t tease anything coming up in the future, but there are a couple of things coming up, one of them relatively soon, that I am very excited to share with everyone as soon as I can talk about it.

AD: Well, I’m excited to see it! I do really appreciate your time, particularly with how busy you are, and everything going on around us right night now. [Campbell and I spoke via telephone in the early days of the COVID-19 outbreak].

BC: These are crazy and scary times. I will say that if I was going to squeeze lemonade out of lemons, and really, if there is any bright side to any of all this craziness going on right now, Amazing Stories and The Letter for the King came out at a time when everyone’s stuck at home, and hopefully, able to watch them.

Campbell’s episode of Amazing Stories, “The Heat” is available now on Apple TV+, with new episodes dropping on Fridays. The Letter for the King is available on Netflix starting March 20. You can keep up with Campbell and his projects on Instagram. Follow him: @brandoncampbell_music

With 'Curb Your Enthusiasm' Season 10, Larry David is Coming for That Emmy