Growing up as a teenager on television has to be difficult. Your character’s most formative years are put on display, and you are at your most vulnerable. You worry about you self-worth and how you look to other people around you. No one has the perfect teenage experience, but Isabella Gomez’s Elena Alvarez gives us hope for a bright and intelligent future. Her Elena is headstrong, passionate, and one of the best reasons to turn into Pop TV’s latest season of One Day at a Time.

Elena Alvarez has been through a lot in the last three years, but she has also found happiness with her partner, Syd, played to dorky perfection by Sheridan Pierce. Elena is not defined by a romance, however. She is the first person to educate you on injustices towards women and LGBT issues, and she is so earnest in her intentions.

With this new season, Elena is about to go through more changes, but they are ones Gomez is thrilled to explore. As she has matured through her teenage years, she has taught us that times can be tough, but the light at the end of the tunnel can be so bright.

Awards Daily: This is One Day at a Time’s first season with Pop TV after the move from Netflix. Does it feel different to you at all?

Isabella Gomez: Mostly because of the time. There was a year and a half between season three and season four which is a really long time so everybody came back changed a little bit as humans. I am exponentially grateful because of the whole time difference and knowing how rare it is that we get to come back. Sometimes we can tell there’s a little difference in the episodes. It’s a few less minutes. Other than that, it still feels like the Alvarez family, and that’s a relief.

AD: I know a lot of people are excited for One Day at a Time to come back because we are living through a really scary moment right now. I will say that this show is the most soothing, and I’m so thrilled it’s back since it will help a lot of people.

AD: Elena and Syd decide to take a very mature step in the first episode of the new season. Do you think teens look towards teen characters, and are you anxious to see how fans will react?

IG: I definitely think that teens subconsciously look towards their favorite characters—I don’t think, ‘All right this is what we are going to do.’ But, of course, that’s how we learn. Through television and movies and media and books. I think fans might be originally very upset (laughs), but I think it’s a very ‘them’ decision. As an actor, I’ve been in that mentality myself before. I totally think that, after the initial shock, they will understand and think it’s funny. I can’t imagine that there aren’t other teens out there who think, ‘Wait…we need to take a step back.’

AD: I love the chemistry between you and Justina Machado’s Penelope, and I’ve always been interested in how that bond strengthens every year. Can you talk about the relationship evolution between Elena and Penelope?

IG: Elena is basically a full grown human and an actual adult this season. I think you can tell and I think she’s stepping into her own. Because Alex is getting older, she doesn’t need to baby him as much and she gets to focus on just herself. She’s allowed to think about her relationships and mature. Since Elena and Penelope have gone through so much in these past three season—and because Alex is obviously Lydia’s favorite—they’ve created a bond that’s super special. They can be more like friends now instead of Penelope parenting—which of course Penelope still does. Outside of the show, Justina and I are so close, and I love her so much. I call her mom (laugh). I think that shows. 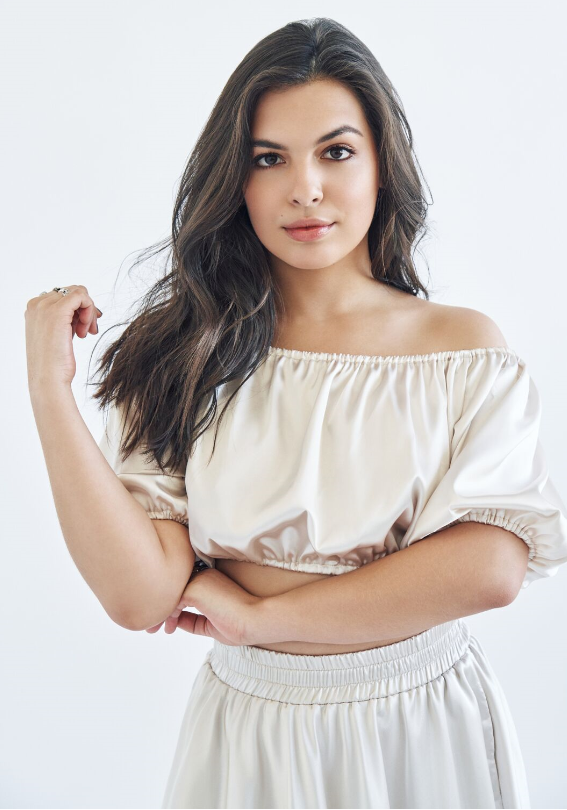 IG: On the show, I actually realized that I was turning Elena into a mini Penelope. Certain lines would come out just like Penelope would say them. I think that’s such an interesting progression because teenage girls have trouble with their moms and then they realize their mom is their best friend.

AD: I was going to say that I don’t think Penelope will ever be able to stop parenting any of her children.

AD: I was re-watching some of the scenes from the last season before this one begins, and you have that really powerful moment in the episode about consent and toxic masculinity.

AD: Do people still come up to you and talk to you about that?

IG: Absolutely. It’s very interesting because I wasn’t saying that was revolutionary or something that all the women in the family haven’t already discussed. As women, we are told to sit pretty and shut our mouths, and I hadn’t seen that subject touched upon on television like that. Because Alex is so young and we know him to be well-intentioned, it’s still a shock that he can be toxic and do things that can affect people exponentially. I think that’s a huge disconnect that we don’t talk about in our society. We tend to not call our male friends out because we know they don’t mean it or we know they’re good people. It’s so cool—and so different—that we got to say, ‘I love you. I think you’re a good person, but you’re doing a crappy thing and it needs to stop.’ People absolutely still talk to me about it, especially older generations of people.

IG: I think girls my age and girls younger than me are on it. They are going to change the world. Older generations are shocked that we are talking about it.

AD: I have heard of older people really responding to conversations put forth by younger people. I’ve actually seen people come back and apologize for things that they’ve said that they didn’t realize could have been quite offensive.

AD: We don’t have a queer character like Elena on any other television show. I love how she always speaks her mind and wants people to know all the right information. Can you tell me about that aspect of Elena leading into this fourth season?

IG: Now that the fans have been watching since season one, there is such a rapport and there’s such a bond, especially since I’ve been able to go to some conventions and I’m very active on social media. We have such a cool relationship now. It’s a weird thing to talk about, and actors talk about their fans in a strange way. I feel so lucky to have been embraced so much by the LGBT community, and what’s really cool is that they are such a voice on the show. We look to them to see what they like and how they feel about things. Not only for that but for information. In the era of cancel culture, I feel very fortunate that I can go to my fans and tweet out or Instagram Live and ask questions. They’re there to support me and they’re just such a group of badass people that are so sure of themselves and vulnerable and willing to put themselves on the line to be the most authentic versions of themselves.

AD: One Day at a Time is successful, to me, because it is able to throw together subject matter that is important but it never feels forced—it’s always grounded in the emotions of the characters. Do you talk about that as a cast as you are rehearsing?

IG: I think that’s another reason why it does so well with people is that it’s an artistic collaboration between everybody on set. Part of that means, as actors, we are allowed to have an opinion—which is so rare in Hollywood (laughs).

AD: It’s not just…come in and say these lines.

IG: No—not at all. It’s a huge thing that Rita [Moreno] and Justina have taught Marcel [Ruiz] and myself to do that. After table reads or run-throughs, we talks with the writers about what doesn’t feel right and what we’re having trouble with. The flow and comedy and drama and the flow of having serious conversations but also not making them sound like we’re preaching or not having “a very special episode” is so crucial. If not, people don’t want to listen. People don’t want to be preached to—they want to watch TV. We’re super lucky to get to do that.

AD: What are you most excited for us to see this season since we get to watch it week to week now?

IG: As Elena, I am excited to see her grow up. She feels very mature and grounded this season. She still is her crazy, quirky self. She’s been in this relationship for a long time, so those nerves have settled and she’s going off to college soon. She’s really thinking about what her life is going to be which is such a contrast of season one and her being like, ‘I don’t want a quince!’ As an actor, I’ve never been on a week to week show like this. We get to be super topical now, especially now that we are on this forced hiatus. I feel like we have to talk about this because the Alvarez family would totally be affected by it. I’m super excited to live tweet and get to see what the fans are reacting to. I’m intrigued how to see it changes the writing.

AD: I’m thrilled to see how it changes the audience perspective since we can let that reaction build and build as the spring goes on.

AD: Did you finish filming the fourth season?

IG: People know. We have live shows so people had tickets to watch the show—there were so many people that were flying in to watch. I’m not sure how it will work. Will we have an audience when we come back? We’re not sure. We got six done, so those will air and then we will film the remainder of the season when we go back.

AD: Something to look forward to then!

The fourth season of One Day at a Time will debut on Pop TV on March 24.