Apple TV+’s new drama, Defending Jacob, is based on William Landay’s 2007 novel of the same name—one of my favorites. The story: Jacob, (Jaeden Martell) a 14-year-old Massachusetts teen from a picture-perfect family, is accused of murdering a fellow classmate. Jacob’s father (Chris Evans) is the Assistant District Attorney working the case. What follows is a murder-mystery wrapped up in a domestic drama. Did Jacob commit the crime? How far will his father go to protect him? And, most compelling, is Jacob’s distant behavior a result of nature or nurture?

When I found out that Chris Evans, another long-time favorite of mine, had been cast as Andy Barber, the father facing this moral crisis, I was so excited. On paper, the eight-part limited series has it all: A great story, great actors (my Downton Abbey favorite Michelle Dockery plays Jacob’s mother), and an Oscar-nominated director at the helm (Morten Tyldum). But, although Defending Jacob proves to be a stunning acting showcase for its three leads (more on that later), the show doesn’t reach its potential and is never as captivating as its best-selling source material. 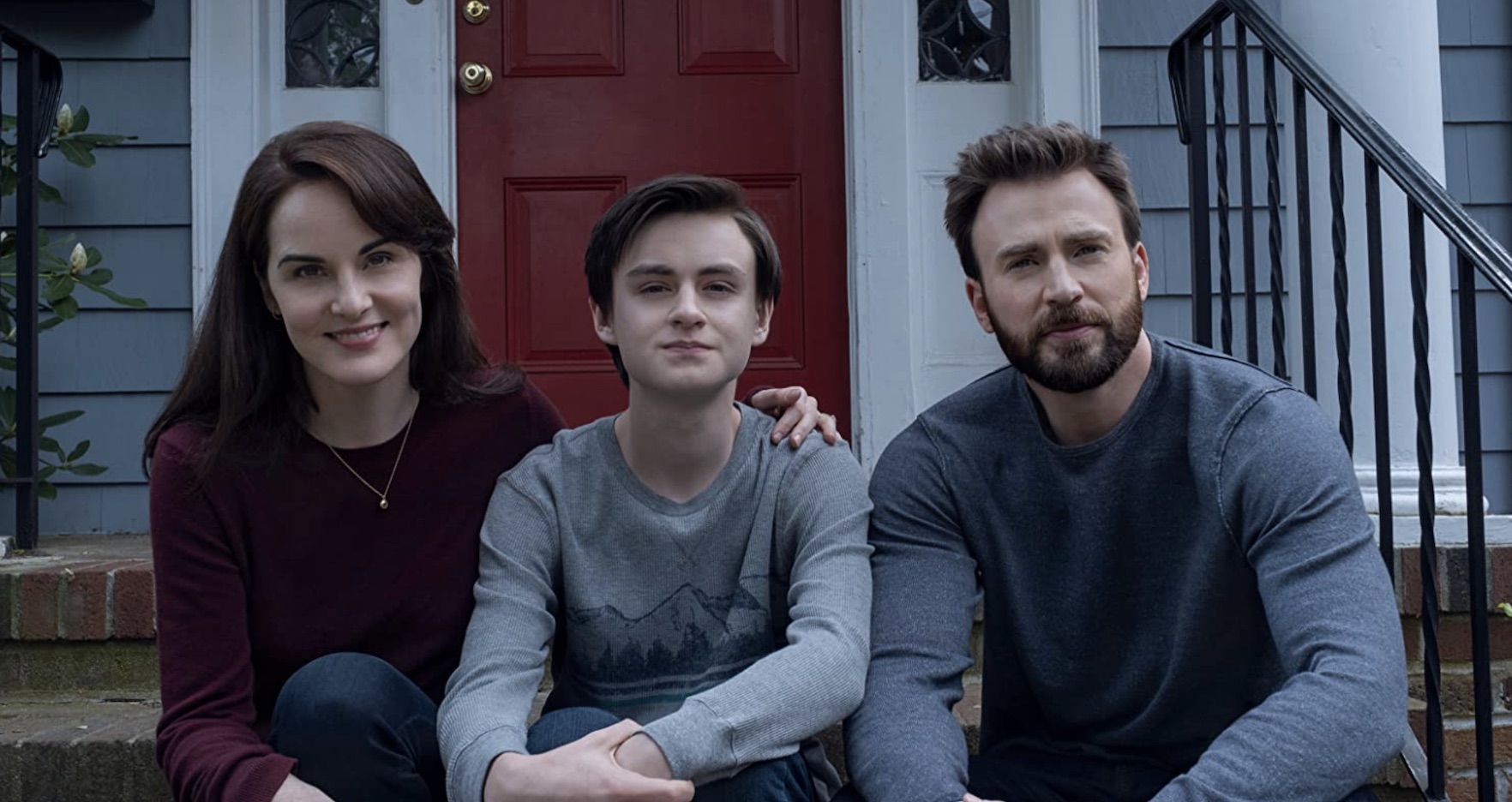 Let me be clear, there’s plenty about Defending Jacob that I liked. The acting is great across-the-board and elevates Jacob as a series. For starters, Chris Evans is terrific as the patriarch. As I said, he’s always been one of my favorite actors, and fans of his, tuning in to Defending Jacob for his sake won’t be disappointed. Outside of his good looks and Marvel-packed resume, Evans has always been a compelling actor to watch, and I’d argue a vastly underrated one. His nuanced and magnetic performance in Defending Jacob draws you in and commands your attention.

Likewise, Michelle Dockery is doing some of the best work of her career here as a mother faced with the possibility of her son’s imprisonment. She is devastating on screen. It is a testament to her talent and range as an actress (also vastly underrated) that she can pull off an ice queen like Downton’s Lady Mary Crawley and the warm and loving Laurie, polar opposites, with such ease and conviction.

Jaeden Martell dials up his Knives Out creep factor, and I mean this as a compliment, is the perfect Jacob, cold and distant—completely believable as a possible killer. But equally convincing as a shy teen in the wrong place at the wrong time. Cherry Jones is as wonderful as ever when she pops up as Jacob’s trial lawyer.

If this were the Emmys of 10, or even five, years ago, the strength of Evans and Dockery’s work in Defending Jacob would make them shoo-ins for nominations. And for Dockery, maybe even a front-runner of sorts—they are both worthy of that level of praise, but the Limited Series races seem simply too crowded for Evans and Dockery to make a mark this year. (I hope I’m proven wrong.)

The music is another one of Defending Jacob’s strongest offerings. Atli Örvarsson’s score is gorgeous and, at times, chilling to the bone. (The title sequence is stunning and one of my favorites in recent years, don’t skip it.) Other than some heavy-handed cinematography, you really can’t fault Defending Jacob’s production values. It’s truly a well-made show. And when it’s good, it’s really good.

Mark Bomback’s script is really Defending Jacob’s most glaring flaw. The writing here is uneven and clunky at times, which also then slows down the pacing and thrill of the story. What’s most baffling is that some of the novel’s most compelling twists have been changed or completely removed. And with that, it feels as though the novel’s central themes go unexplored and some of the lasting impact is ultimately diminished.

Maybe, I’m a victim of my own high expectations. And maybe if I had gone into Defending Jacob with no prior knowledge of the book, I’d truly love it as much as I love the performances. But what I see is a good show, maybe a really good show—that should, and could, have been a great show. And I’ll be stuck wondering what that version would have looked like instead.

Still, Defending Jacob is absolutely worth your time. Come for Chris Evans looking glorious in a suit, but stay for incredible performances and a fun, binge-worthy mystery that’ll keep you guessing until the very end.

The first three episodes premiere on Apple TV+ on April 24 with new episodes out every Friday.